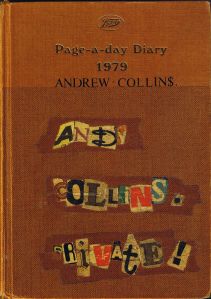 It’s Friday. Not quite the end of the working week, as I have to write and clip Telly Addict tomorrow. Yesterday, I found myself in Hastings, just for one day, and – a complete stranger in town – I was surprised and delighted to run into an old friend from Chelsea School of Art, who was in the year above me and whom I may not have seen since the 90s, maybe even the 80s: Peter Quinnell (whose website is here should you wish to commission one of his fabulously arch collages, which he has been perfecting for 25 years). The reason I mention it, is that he called me “Andy.” Because when he knew me, in the mid-80s, I was called Andy.

I dug out my 1979 diary, above, as it marks the first transition from my birth name Andrew, to what I felt was the cooler and more casual Andy. As you can see, I carefully Letrasetted “Andrew Collins” onto the Boots page-a-day diary to confirm ownership, presumably when I first got it, for Christmas 1978. However, this was the year punk broke in Northampton (sorry, but it was), and certainly the year puberty broke in my endocrine system, hence the later branding, in punk-styled ransom lettering, carefully sealed under Sellotape: “Andy Collins. Private!”

The name-change, aged 14, was non-negotiable. It went on all my exercise books. I practised writing it, and elongated it into an artistic “signature”. I was saying to the world in a first flush of defiant individualism: Andrew – he dead.

It’s weird to be called Andy again. But perfectly normal for Pete to do so, as I was sealed in the aspic of time as far as he’s concerned. Still Andy. Still a student. Twenty eight years have passed since he graduated from Chelsea; 27 since I did. We all reinvent ourselves to a degree, although he was instantly recognisable when I saw him unlocking his car on Hastings’ Old High Street, and he only had to look twice to recognise me coming towards him. I must have looked something like this when he last saw me:

Time bends. Space is boundless. It squashes a man’s ego … If you can identify which film that quote comes from, you’ll be ahead of me here. Yesterday I was tasked with telling the 46-year story of the Planet Of The Apes franchise for Radio Times, to tie in with the fact that the second rebooted entry in the series Dawn Of The Planet Of The Apes is imminent, and the first, Rise Of The Planet Of The Apes, is showing in two Saturdays’ time on C4. This is the kind of piece I am retained by the magazine to write. Most of the time, the film section is headed up by a straightforward actor/director junket interview, but occasionally, it remains unfilled until the last minute – Wednesday afternoon – when I must step in and provide a 750-800 word feature from scratch. It’s a bracing commitment.

As previously stated, I do not romanticise my own writing ability. If anything, I have delusions of adequacy. But I know I can write quickly, and to a reasonable professional, spell-checked, word-counted standard, and I never play the prima donna or tortured artist. Brief me at 2pm and I’ll deliver 800 words by 3.30pm. (Luckily for me, the sub-editors at Radio Times are wizards, so you’re always going to look better on the page than you ought.) Anyway, the reason I bring up the Apes feature is that, rather than just trot out the story, I tried to personalise it. This is encouraged. I reflected on the early 80s and an era in which my school- and then college-pal Paul Garner and I were obsessed with movie makeup effects. 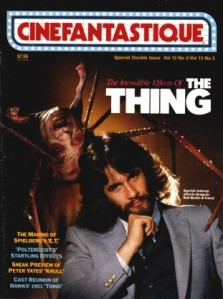 This imported 1983 issue of horror/fantasy/sci-fi journal Cinefantastique, which we both pored over as it were a holy sacrament, sums up our religion during that devoted period. In gory detail, its vast cover story unpicks makeup genius Rob Bottin’s work on John Carpenter’s The Thing, a film Paul and I were dying to see. Although both of us loved drawing and caricatures – Paul actually produced a full-size, Mad magazine-influenced spoof of Planet Of The Apes (one of our favourite films) – he was the ingenious one who also moved into 3D model and mask design. I just sat on the sidelines and thrilled to his amateur triumphs: a full-head werewolf mask, a Woody Allen forehead and glasses (which I wore in a play). He went on to earn his living as a commercial artist, storyboarding and creating incredible bespoke prints, usually with a horror/fantasy/sci-fi theme. Once you’ve seen Peter Quinnell’s work, you might want to browse Paul’s. 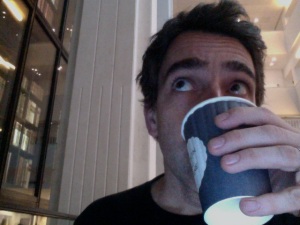 See, there’s a link here, and it was too good not to get down while I sit here in the Library. In writing about my fanboy love of makeup artists for next week’s Radio Times (they’ve headlined it, “Confessions Of A Fanboy”, which it kind of isn’t), I reminisced about my friend Paul, who pursued his love of art and design and made it his profession. Although I’ve seen him on and off into the current century, he will still think of me as “Andy”. In visiting Hastings and bumping into another friend, from college, who also called me “Andy”, I was once again reminded that I never pursued my love of art and design into a full-time career – although it opened the door for me to journalism, so I couldn’t have got here (wherever here is) without it.

I reverted from Andy back to Andrew in the late 80s, when I sought to establish myself as a professional illustrator, and had an invoice book and an accountant and my first answering machine. I drew the covers of these.

I seem to remember I was discouraged by the design agency that employed me from signing the artwork, as it might be considered self-aggrandising by the client, Trinity-Mirror. So after all that fannying around about Andrew and Andy and Andrew (and, at one pseudonymous stage, Boone), I was anonymous.

I was the man with no name. The unknown artist. It squashes a man’s ego.