This page is pretty much retired. I decided to make a separate page for gigs in 2010, as I suddenly seemed to have gigs. Since my first one-man show Secret Dancing at the Edinburgh Fringe that year – or at least since that show’s farewell gig at Cardiff’s Masonic Hall – I have retired from stand-up comedy. And since Richard Herring and I stopped podcasting in November 2011, that avenue of live performance has also come to an end.

I’ll leave details of my final shows up here, in red, just for posterity. 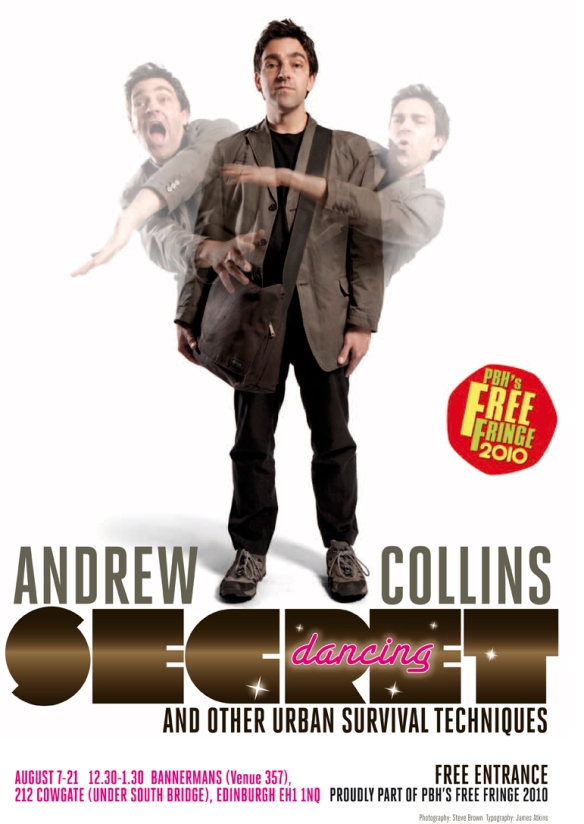 Press release: In 2010, Andrew Collins goes solo at PBH’s Free Fringe, part of the Edinburgh Fringe. His show, Secret Dancing… And Other Urban Survival Techniques has been developed over the last two years while gigging with Richard Herring – including a sell-out Live Podcast show at London’s Leicester Square Theatre in February – and playing on various bills curated by Robin Ince, including the Camden Fringe and Nine Lessons & Carols For Godless People at the Bloomsbury Theatre.

Secret Dancing itself, a technique Andrew has been honing while travelling on public transport in London, forms the centrepiece of a genial ramble from A to B, including his three birding ambitions, decoding Masterchef, living in Surrey for three years and not apologising, the glory of advertising hyperbole, and spoilers outside churches.