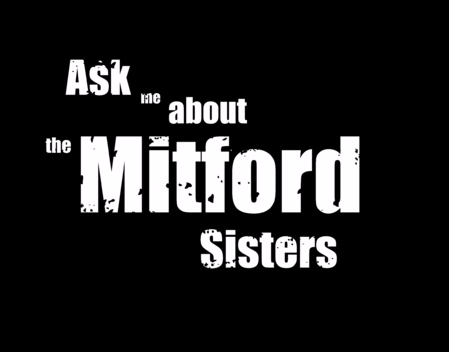 As is well known, I love the Mitford Sisters. (This picture, of course, only shows five of them.) So many people now ask me which Mitford Sisters book is the best place to start, and having blogged about it at length twice, I thought I’d do a public service and put them in some kind of useful order on a permanent blog page easily accessed without trawling the archives. Start from the top and work down, is my advice.

The Mitfords: Letters Between Six Sisters
Edited by Charlotte Mosley
The first Mitfords book I read (when it first came out in paperback in 2008), and the one that started the Mitfords ball rolling. This is why I recommend it to any other virgin: the letters span a century, from Nancy’s earliest efforts as a gel to the final fax sent by Diana to Debo just before she died in 2003. The symbols used to mark the sender of each letter – swastika (Unity), moon (Diana), spoons (Pam, the least-known, unpublished Mitford), hammer and sickle (Jessica), quill (Nancy), crown (future Duchess of Devonshire, Debo) – are what sucked me in. It just struck me that the Mitfords really were extraordinarily interesting, and all so different. You really get their voices this way, too. Mosley, who is related to the Mitford line by marriage, is the estate’s de facto official archivist and gives good biographical detail before each chapter. If you’re not in love with them by the time second youngest Jesscia gets hold of the notepaper, you never will be.

The Mitford Girls
Mary S Lovell
By far the best straightforward biography of the whole lot of them. If the letters have pulled you in and you have no wish to get out, this is the best all-round book.

Unity Mitford: A Quest
David Pryce-Jones
You may wish now to home in on your favourites. I put this relentless, almost forensic biography of Unity (the Hitler groupie who shot herself in the head when war broke out and died in 1948, a sad shell of a woman) at the top of the pile because it’s packed with so much detail – too much, at times – you get a pretty complete picture of the most misunderstood of all the Sisters. The original secondhand edition I have of this features of photograph of Diana on the cover – surely one of the greatest publishing cock-ups of the century!

Diana Mosley
Anne de Courcy
Much harder to like than, say, Decca or Debo, Diana’s story is nonetheless fascinating and well told by de Courcy – you’ll be amazed at the way a woman so intelligent and vivacious allowed herself to be absorbed into the life and work of her second husband Oswald Mosley, leader of the British Union of Fascists. She was so devoted to him. On her deathbed she refused to condemn Hitler. Imagine being her son, Max.

Love From Nancy: The Letters Of Nancy Mitford
Edited by Charlotte Mosley
Because Nancy was the most famous Sister, a bestselling novelist at 30 despite never have been to school, it’s a joy to see her acid tongue and way with words develop from girlhood. She was a right bitch, at times – or a tease, if you prefer – and apparently always ended her letters at the bottom of a page. The footnotes are sometimes longer than the letters.

Decca: The Letters Of Jessica Mitford
Edited by Peter Y. Sussman
My favourite Mitford, in that her politics are closest to mine, and what a natural wit. The “red sheep”, she exiled herself from the family, eloping with second cousin Esmond Romilly to the Spanish Civil War, then living in a slum in Rotherhithe, and ending up in America, running a cocktail bar in Florida, joining the Communist party, and turning herself into an investigative journalist. (She married the civil rights activist Robert Treuhaft after Romilly was killed in the war.) Unlike the others, she did a day’s work.

Hons And Rebels
Jessica Mitford
A must. No-holds-barred memoir of the sisters’ early years, brilliantly told by Decca. There’s a follow-up, too, A Fine Old Conflict.

The House Of Mitford
Jonathan Guinness with Catherine Guinness
Test your Mitford obsession: you’ve read one book about the family, but can’t stop yourself buying another one when you happen upon it in a bookshop in Dublin, even though it may affect the weight of your luggage on the flight home. The Guinnesses are also related to the Mitfords (he’s the son of Diana and her first husband, Bryan Guinness, whom she cruelly and publicly cuckolded, without much complaint from the stout heir). More here on the earlier Mitford relatives.

Rules Of The Game/Beyond The Pale
Nicholas Mosley
Gripping, and entirely personal, account of the life of Oswald Mosley, by his son. The first book covers his first marriage to the tragic Cynthia, the second his marriage to Diana Mitford, their dalliances with the Nazis (they were secretly married at the house of Josef Goebbels, naturally), their internment at the start of the war, and their attempt to lead a normal life after that. Mosley is a larger than life character – you couldn’t make him up – and infuriating, but Nicholas’s honesty from the son’s point of view gives the writing real heart. Highly recommended, if you can handle all the jackbooting.

Noblesse Oblige
Edited by Nancy Mitford
You’ll have to seek this one out in secondhand shops, but look how beautiful the original Penguin editions is! A slim curio, it’s a collection of essays from 1956 about class, of which Nancy’s own on “U and Non-U” is the keystone.

Wait For Me!
Deborah Devonshire
Newest Mitford memoir, from the last of the gang to die, Debo. Charmingly written, and sheds fresh light on their growing-up years, cutting through a lot of the mythology surrounding the parents. However, you’re going to have to wade through a lot of daily life at Chatsworth in the latter chapters. An amazing woman – I actually harboured the hope of meeting her – but it gets a little repetitive when it’s all about state visits and big banquets.

Then there’s the fictional work of Nancy, most famously the post-war Love In A Cold Climate and The Pursuit of Love, which are handsomely packaged. She basically recycled her home life and created vicious but amusing social satire, on a par with her friend Evelyn Waugh’s Vile Bodies (which, of course, she didn’t rate much), it’s all Bright Young Things and the shifting sands of social progress. Frankly, a working knowledge of the Mitfords’ background is really handy for seeing where she’s coming from.

The Pursuit Of Laughter by Diana Mosley, by which point we’re into non-essentials for completist fools only. A collection of Fascist Spice’s writings. I bought this in hardback and have yet to read it. Debo has also written other books about Chatsworth House, but I admit I have not read them. It’s always good to have something in reserve when you have gone nuts.

Over the past couple of years I have invested in all the books listed here, and more, new and secondhand, depending on whether or not they’re in print. There really isn’t enough I can learn about the Sisters. And once you’re into the mindset and the period, you can move sideways to confidants James Lees-Milne and Evelyn Waugh. I once tried to contact Charlotte Mosley via her publishers, HarperPerennial, but heard nothing back*. I just wanted to tell her how her Letters changed my life! (And let them know how much publicity I have been doing for this book, unpaid.)

*They were still ignoring me when I first wrote this is 2008 after two emails. Well done, that press office!

I hope this answers any questions from the back. Read the one at the top of you’ll soon be using the Mitford catchphrase, “Do admit.”