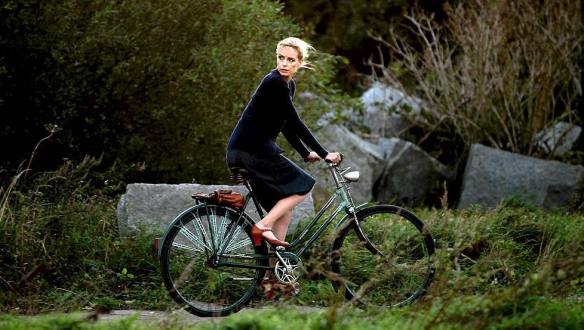 Two European films seen a few days apart, one French, one German, and how different. Untouchable, the one everybody’s heard of, is a feelgood French comedy and box office smasheroo with little time for thematic subtlety or narrative ellipse, the sort to break out of the arthouse ghetto and find an audience who wouldn’t normally touch subtitles with a bargepole; Barbara, less concerned with the quest for bums on seats but nonetheless honoured by the festival circuit and laurelled at Berlin, is a more demanding watch, although drew an impressive crowd at the Renoir two nights ago, and paid back in different ways.

I’m sure you’re abreast of Untouchable (or, to use the French, Intouchable): a quadriplegic rich man rediscovers his lust for life thanks to a Senegalese carer from the projects who refuses to stand on ceremony and speaks the truth while all around him tread carefully. Both parts are played with great spirit: François Cluzet – best known here for Tell No One (or Ne le dis à personne) – and Omar Sy – most recently seen in the irksome Micmacs – bring humanity to the frankly cut-out characters they have been given. Cluzet plays paralysed from the neck down with consummate dedication, and, in doing all the work with his face, proves his chops in a way that only playing the disabled can. Sy is the livewire, and certainly feels like he is riffing on the script, whether he is or not, and that’s terrific. It will make you feel good, in that it depicts hope out of hopelessness, and makes the optimistic prediction that upper-class French people can learn to rub along with African immigrants. It also knows how to push buttons.

Some might say that Driss, the character Sy plays, is a reductive stereotype, in that he’s poor, he’s initially workshy and, hey, he’s a great dancer. He also conforms to the “Magical Negro” achetype so beloved of Hollywood (an inevitable English-language Weinstein remake is already on the cards, in which the “Negro” may become even more “magical”). All that considered, Driss is the beating heart of the film – and it’s he who won last year’s Cesar for best actor, beating The Artist‘s Jean Dujardin. It could be argued that we should applaud the film for foregrounding an African character, and performer. He is employed to be the “arms and legs” of Cluzet’s depressed widowed millionaire in his big, lifeless mansion, and does this job with athletic aplomb, at one point cutting a rug to Earth, Wind & Fire in a showcase scene for his talents. But even here, I couldn’t help but think: really? All the white people who work in the mansion are, of course, rubbish dancers. Again: really?

This isn’t a spoiler, but at the very end, the filmmakers show home-movie footage of the real-life quadriplegic and his carer, Philippe Pozzo di Borgo and Abdel Sellou, who had previously been featured in a documentary (Sellou has also written a bestselling memoir You Changed My Life). Notice anything about the carer’s name? Yes, it’s Algerian. Not Senegalese. If you look him up online, he’s nothing like as black as Omar Sy. So why did the filmmakers change his nationality from North African to West African? Did they require Driss to look more black, more African, to help make their ebony-and-ivory point for the broadest audience possible?

Because Untouchable makes fairly blunt and sweeping – literally, black and white – drama from the thorny subject of racial difference and racial prejudice, and it’s based on a true story, I can’t help wondering why the race of a key character has been changed? I’m genuinely interested to know, particularly as we’re in a country like France, where race is a burning issue. Maybe it was simply so that they could cast the likeable Sy?

If you can shed any light on it, let me know. And I’d be interested to know how “good” it made you “feel”. I felt good about the performances, but less so about the film, which, despite its apparent roots in veracity, seemed more like a fairytale than anything else. 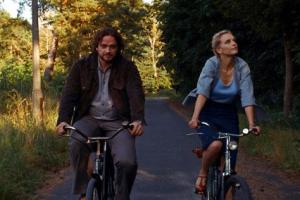 Barbara is being sold with this quote from, it says, MSN: “Anyone who loved The Lives Of Others should see this.” (I’ve searched MSN’s film reviews and can find no context for this quote, incidently.) Hey, you can’t blame them; The Lives Of Others is a German-language film that successfully crossed over, internationally, and won the Best Foreign Language Oscar, so if selling this is all about reassuring the potential audience, job done, I guess. And both films are set in the early 80s in East Germany, and show invasive, paranoid surveillance by the Stasi. The big difference between the first film and this one, is that it was a thriller, and this isn’t, despite initial appearances.

Directed by Christian Petzold, of the Berlin School – whose previous film, Yella, had a wider release than his previous work – it stars his muse, Nina Hoss as the titular doctor who is exiled from East Berlin to a small rural town on the Baltic coast after incarceration for some unmentioned crime against the state. (I’ve since read that it was simply to express a wish to leave the GDR, although I didn’t pick this us from the film, which does anything but spoon-feed, to its credit.)

She is understandably wary of those around her, assuming she’s being watched – which she is – and acting accordingly. She is an intelligent woman, and an excellent doctor, but she keeps herself to herself, constantly putting distance between herself and her seemingly benign boss, the bear-like Ronald Zehrfeld, who fancies her. Barbara moves at a slow, exacting pace, and gives little away at first, which actually reflects the general paranoia of the time and place. Even out in the country, people are wary of who’s listening. (Barbara’s nemesis is very real, Rainer Bock’s seemingly sadistic Stasi officer, so it’s not as if it’s all in her mind.) Like the decor of the run-down buildings – the hospital, her apartment with the fizzing wall socket and un-tuned piano – this is a spare, minimalist film, but against such an austere background, symbolic movement – the freedom of a bicycle ride, the coastal winds buffeting the trees – feel more significant.

I don’t know Petzold’s sork, and have not seen Yella, but I’ve a huge soft spot for the New German Cinema of the 60s and 70s, and the more recent revival of Germany’s output – including the obvious breakout likes of The Lives Of Others and Downfall – and this slots comfortably into that intellectual/historical renaissance. Many of the 70s films looked back at the war and Nazism, while the post-unification films use the fall of the Berlin Wall as their focal point.

I recommend Barbara. It works harder for its audience than Untouchable, and we must work harder for it. But there’s nothing wrong with hard work.