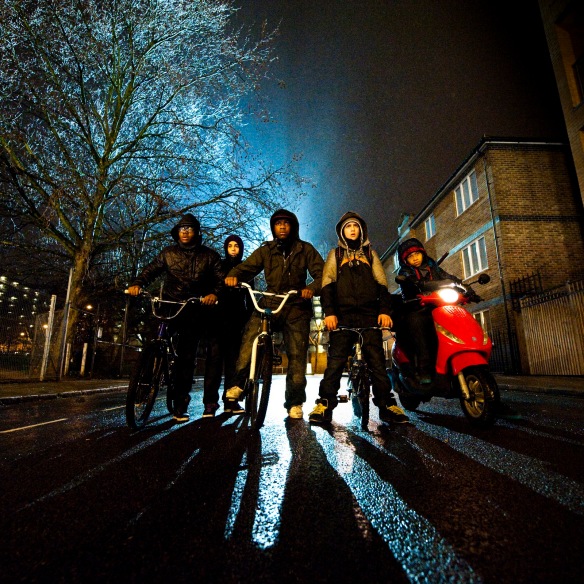 I was going to be an obedient film critic and wait until Attack The Block was released (May 13 in the UK) before writing about it, but as it’s aimed at the young people, the film company are not only happy for us to write about it in advance, they’re all for it. I saw it last night. Its writer and director, Joe Cornish, introduced it, which was nice of him, although it can sometimes make critics either resentful or over-nice if they know that the filmmaker is in the building, neither of which is a helpful outcome. Let’s remain calm. (I know Joe reasonably well, having handed over the reins of Radio 4’s film programme Back Row to him when I left in 2005, during which period we saw each other a fair bit. I am also an unashamed fan of he and Adam’s oeuvre, as you know.) Attack The Block, which is essentially a comic horror movie with a social conscience, is very good indeed.

In his intro, and in other interviews I’ve read elsewhere, Joe made clear that his aim with his debut feature was to take his love of 80s creature features like Gremlins, Tremors and Critters – and “gang” capers like The Goonies and Stand By Me – and give it a more modern, urban setting, namely, the Brixton-Stockwell-Kennington triangle in South London where he’s lived for years. He’s done this by staging a malevolent alien invasion in a council estate, the “block” of the title. His heroes are five teenage hoodies, of mixed race but united by the exaggerated black hip-hop patois spoken by all streetwise British youths, and by an us-and-them attitude to authority, in particular the police (or “the Feds” as they are apparently now called on estates). These five characters are all played by newcomers to screen acting, recruited by Joe and his producers to bring authenticity to the characters as they posture and pose and project their personalities. This is clearly a defence mechanism. A form of male machismo that has preoccupied adolescent boys since the dawn of time. It is not new, but the sense of violence at its heart is.

If, in real life, you find the way kids today speak – in what is surely the ultimate counter-racist argot, in that all kids, from white to black, speak it – you may initially recoil, as Attack The Block drops us into a confrontation whereby the five Goonies, led by Moses (John Boyega), pull scarves over their faces and mug Jodie Whittaker’s lone nurse, on her way home to the block where she also lives. These are not sympathetic characters. They intimidate a young woman, five against one, and a blade is flashed. Surely, you wonder to yourself, we’re not supposed to like these kids? Well, yes you are.

What Joe has done here that’s brilliant is make life difficult for his audience. Or at least, his adult audience. It’s entirely possible that teenage audiences will identify with the muggers, and with their street smarts. But you could identify with the drug dealers in The Wire because they were presented realistically and frankly. There are reasons why some kids grow up to be drug dealers and hoodlums on BMX bikes (and in one humorous case in Attack The Block, a pizza delivery moped), and some kids don’t. Cornish isn’t letting them all off. He’s just saying: look at where they live. No, actually, look inside it. While the perhaps over-caricatured posh white dope-smoker (Luke Treadaway) slums it and takes the nasty old lift up to the floor where his friendly dealer (Nick Frost) works, the council block rarely takes a central role in an action movie. Does anybody remember a 90s film called Downtime, a woeful British disaster movie set in a council block lift? It didn’t work because it wasn’t a glamorous setting. Attack The Block works because it bends familiar action-movie tropes and makes them fit in a council estate.

Joe Cornish has two weapons. One is a working knowledge of how action movies work. The other is humour. Get past the patois and the five hoodies are, to varying degrees, very funny. Either they’re afraid of their mums, or they fancy themselves, or they just see the world through videogame/action movie eyes. When the aliens arrive, one of them says it’s “raining Gollums.” This is very funny. It doesn’t say, ha ha, listen to the stupid boy, it’s just a funny line and it tells us that kids look through a prism of popular culture. While the siege scenes are handled with supreme vivacity and grit, it’s the dialogue – and by association, the naturalistic acting from the five leads – that gives Attack The Block its edge over any number of other films that involve one group of beings battling another. I can’t quote chunks of it, as it’s said in that street manner that doesn’t translate to the page. Yes, there are guns (the block’s kingpin Hi-Hatz, played by Jumayn Hunter – who was, ironically, in Eden Lake, which I liked but which simplistically used hoodies as feral, Deliverance-style demons – is tooled up; but this is countered by the two younger kids, Props and Mayhem, who have a water pistol), but the aliens are clearly beyond being shot, and must be defeated, as per tradition, by cunning and cleverness.

Clearly I’m going to give no plot points away, but I wouldn’t be going out on a limb to say that redemption, of sorts, takes place. Someone on Twitter asked me how a film which starts with five young men mugging a young woman could ever earn our empathy. Have you ever seen a film before where a bad character comes good? Yes, so have I.

Obviously I wanted to like Attack The Block, because it’s a first-time film by a talented broadcaster and writer whose continued success in Hollywood may lead to more radio work for me. And Joe’s a nice guy. But if I’d come away feeling it was a sound debut, maybe a “solid three stars”, that would have been a satisfactory outcome for all of us. To have been able to wish Joe further success would have been sufficient. (That’s sort of how I felt about Richard Ayoade’s Submarine: clearly his career will bear even greater fruit.) But it’s a four-star movie. A four-star movie that I have already read an as-yet unpublished one-star review for. It may well divide as well as conquer.

I fully accept that the grim, South London setting, and the street language, will not be to everyone’s taste. But this is not class tourism. If anything, it gives a voice to a generation, and a strata of society, who are usually marginalised by fiction. And that’s no small thing. It will not miraculously make me feel any more comfortable when I am next forced to pass by a small gang of kids on bikes in South London with their hoods up, but maybe that’s my prejudice as much as its their inherent malevolence.

I overheard two earnest-sounding men in the British Library canteen talking about it the other day. One had never heard of it, the other was enthusing about how, finally, underprivileged kids who live on estates would finally have a film that does them justice and give them a positive spin. I think I can see what he means. But don’t watch Attack The Block out of a spurious need for political roughage; watch it (from May 13), because it’s scary and funny.

11 thoughts on “Attack the blog”