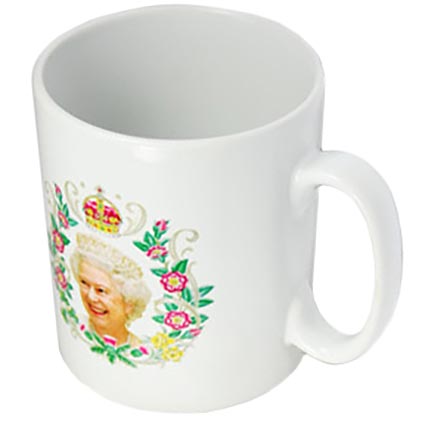 FREE COMMEMORATIVE TEATOWEL FOR EVERY READER!

God save our gracious Queen, long live our noble Queen. The national anthem has its two primary wishes, assuming you believe that a supreme being, more supreme than a ruling monarch, played a hand in her long life of nobility. The British monarch, Elizabeth II according to the list of numerical monarchs stretching back to Alfred the Great who reigned between the years 871 and 899 at a time when Greatness was more enshrined and objective, is 90 years old today. That’s a good age. She should be applauded for reaching 90 and to apparently be in such good shape, both physically and mentally.

I feel pleased for anyone who makes it past 70 without succumbing to debilitating disease or the need to be hooked up to machines. Queen Elizabeth II seems not to be an evil person. She likes horses and dogs, so she can’t be all bad. Some would say she has “given” her life, or much of it, to her subjects, which is us. But it’s not a job she applied for. She was promoted from within the family firm, and given little choice in the matter. I would be gracious enough to say that she adapted well to her duties. I would also argue that it’s a lot easier to get to 90 if you don’t have to worry about anything. Few of us, her subjects, get to live a life that is all laid out for us by other people, where we don’t have to squeeze our own toothpaste out of its tube if we don’t feel like it, and are essentially on holiday all year round, in the sense that we are often abroad, and in transit, but without the faff of having to book, or wait around. It must be nice not to have to worry about money. I would guess that money worries are the number one cause of stress – and stress-related illness – in our society. To literally never have to worry about where the next penny is coming from is most people’s idea of a good life. The Queen has lived that life for 90 years.

On the occasion of her 90th birthday, the BBC’s royal correspondent Nicholas Witchell (or “poor old Nicholas Witchell”, to give him his full title) interviewed her second eldest grandson, Prince Harry’s brother William, who is second in line to the throne. Witchell did so with the usual, required deference of commoners in the presence of the royals, and asked Prince William, the Duke of Cambridge, what “sort of king” he thought he would be. If I had been called upon to ask Prince William this question, I fear I would have been unable not to burst into maniacal laughter at the very thought of asking a 33-year-old man about becoming “a king.” I watch Game Of Thrones, and I am captivated by the complex issues of succession in its interlocking kingdoms, a world of kings, princes, princesses and masters of coin. I am captivated because it is fiction. There are, by my finger-count, 42 monarchies in the real world, the one that we live in, in the 21st century, although quite a lot of them are “ruled” by the same royal family, our one. That’s because there was once a British Empire, “ruled” by Queen Victoria for the most part. Queen Elizabeth is, excuse my maths, the great, great, great granddaughter of Queen Victoria. This is all she had to be, to get the job of a lifetime, for a lifetime.

All of this bothers me. I live on a small island, which once commanded a huge chunk of the globe through the might of its trading power and the modernity of its arms. By the time I was born, less than ten years after Elizabeth was crowned Queen, this Empire was pretty much done. The flag had been lowered in most of its former colonies as independence started to seem like a better and more modern option. I saw Hong Kong handed back on the news. There are still some dependencies and protectorates dotted around; they’re the ones that keep getting namechecked in news stories about tax evasion. And Australia and New Zealand. At least Australia’s citizens had a vote on whether or not to keep the Queen in 1999, when around 55% of them said yes, and 45% said no. You kind of have to abide by this. I have never been able to vote on the same matter, and I doubt I ever will. I have to abide by that. But I don’t have to like it.

Victoria Wood, a talented woman loved by millions who had the same first name as the Queen’s great, great, great grandmother (I think), died yesterday after a short battle with cancer. She was 62. This would be a tragedy for anyone, but it’s one that touched those of us who’d never met Victoria Wood but saw her on the television, and merited headline news. The Queen has already lived 28 years longer than her, possibly because she never had to squeeze her own toothpaste out of its tube or run to a departure lounge. Today’s national newspapers found themselves with a dilemma. Because Victoria Wood, who got where she did through sheer force of talent and will, and possibly sacrifice, was clearly beloved, the non-republican newspapers had to squeeze their carefully planned Queen’s 90th birthday celebrations into half a front page or less to accommodate the inconvenient death of an adored public figure. 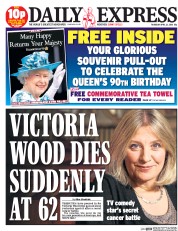 This adjustment was its own testament to the popularity of one woman, versus the perceived popularity of another (although few tabloids can resist a “battle” with cancer). We witnessed a rare ray of commonsense amid what feels like hysteria about a person’s birthday – or one of their birthdays. The Queen’s ability to procreate, and for her children to procreate, and for their children to procreate, is presented as an achievement almost magical in its exceptionalism. Look at the apparently left-leaning Daily Mirror‘s front cover and try to keep your dinner down.

The queen is known as “Gan Gan” to her grandchildren and great-grandchildren. This might be sweet within the family, in private, but it feels over-familiar and inappropriate out in the public glare. By definition it infantalises us all, her subjects. The Daily Mirror can’t call her “Gan Gan”. Off with their heads, I say.

All of this shows how far we haven’t come as a nation. The death of Princes Diana, the Queen’s daughter-in-law, was supposed to change things forever. But it changed very little, except our national aversion to expressing our feelings or having a cry in public, which is seemingly a thing of the past. Queens, princesses, princes and masters of coin ought too to be things of the past. In my humble opinion. (That final qualification was for anyone on social media who thinks that opinions have to be declared, for fear of those opinions being read as objective, legislative fact, even if they are typed next to a small picture of your head and your name.)

Off with my head.