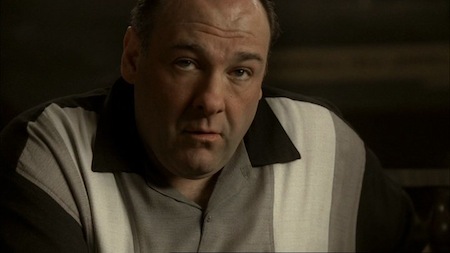 We don’t know if Tony Soprano died. Let’s say he didn’t. Last seen eating dinner with his family in a local New Jersey diner to the chosen tune of Don’t Stop Believin’ in the aftermath of a mob war, he saw a man enter the restroom, his daughter Meadow arrive, at which he looked up and the screen went to black for ten seconds before the final credits rolled. We had no reason to think that Tony Soprano died, having watched him move like a bulletproof Buick through 87 hours of supreme television fiction over six years. He was a big man but he was in bad shape; you could outrun him, but he would catch you in the end.

We had Tony Soprano down as indestructible, immortal, qualities we probably bestowed upon James Gandolfini the actor who played him, and who has died of a heart attack, in Italy, aged just 51. Much discussion has taken place about the final scene of The Sopranos. I reviewed the final episode here. But now that Gandolfini has reached his season finale, we might remind ourselves of that Journey lyric.

Working hard to get my fill,
Everybody wants a thrill
Payin’ anything to roll the dice,
Just one more time
Some will win, some will lose
Some were born to sing the blues
Oh, the movie never ends
It goes on and on and on and on

If there is a TV Valhalla, some marbled hall where only the medium’s immortals congregate, we can be certain that Tony Soprano, as played by James Gandolfini, is already among those Gods, taking his bulky place between JR Ewing, Hawkeye Pierce, Homer Simpson and The Fonz (and if that sounds facetious, it’s anything but). Clearly, Tony would never have existed without creator David Chase, but Gandolfini literally put flesh on those bones. A generous helping of flesh.

What’s most haunting in the immediate aftermath of Gandolfini’s passing is the way we listened to him breathe for all those years, that nasal wheeze increasing when Tony was stressed, a signal sent from deep within his workings that all was not smooth. The laboured breathing was a key facet of Tony’s character; he was not a man you could easily knock over, but he was mortal, always. If he stopped breathing, we would know about it.

Heavy set when The Sopranos made him a household name – within about ten minutes of the first episode starting, possibly from his first walk down that drive – Gandolfini’s skill and presence had already been noticed by the talent-spotters among us for supporting parts in films like True Romance, Crimson Tide, 8mm and Fallen. In movie parlance these were “character” parts. He was not a “leading man”, by dint of his shape. He carried an awful lot of weight, but this was required on the voyage of Tony Soprano, as the mob boss and family man seemed to be carrying all the trouble in the world on what looked like a gone-to-seed ex-prizefighter’s frame, as if, again, those burdens were made flesh.

We lived through those panic attacks with him, so full-blooded and corporeal was Gandolfini’s acting, as delicate and nuanced as he seemed bulky and unyielding. Gandolfini built him up but nobody could knock him down. There is little in TV’s great history to match it. It was Michael Corleone’s wife Kay who, in The Godfather Part III, uttered the devastating line, “I dread you.” We all dreaded Tony Soprano, and yet could not take our eyes off him, week after week, year after year. His temper was on a hair’s trigger, a Tasmanian Devil’s dervish of violence nearly always preceded by a grin, or a squint of death.

Gandolfini’s features were set like tiny pebbles on a vast beach of a face, but what complex emotions he could rearrange them into. It’s a commonplace to say that an actor inhabits a character. Gandolfini was a sitting tenant. He was just as much Tony Soprano when disconsolately peeling slices of bresola off the greaseproof paper at that monolithic fridge as when meting out rough justice to some insubordinate on the pavement with a staple gun or his ham-like fists.

It was a masterstroke of storytelling to have Tony’s entire arc prefigured by the flight of some ducks from his swimming pool, but rewatch that early sequence again and see how much wordless pathos and existential fear Gandolfini builds in, that bowling ball face shifting from simple delight to mortal terror. The dressing gown, the flip flops, the vest, the bowling shirts, these were his sartorial tics, but they alone did not maketh the man. In Tony Soprano, Gandolfini found immortality, all the more remarkable for doing so from the rarefied outfield of cable television. His face was not beamed into every American home like Hawkeye’s or Kramer’s or Archie Bunker’s or Mary Tyler Moore’s. It’s rare that an actor gives himself over so fully to a fictional construct, but Gandolfini did that.

Thanks to the medium that made him, he will never leave us.

PS: I was pleased to be able to articulate some of the same feelings for this Guardian video obit, also featuring Andrew Pulver on his films, which we shot this morning.