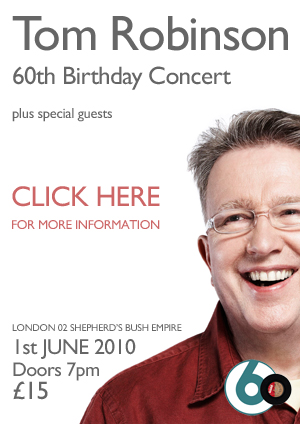 Hey, Tom Robinson is celebrating his 60th birthday in style. You can buy tickets for his Glad To Be Grey gig here. I must say, of all the good folk I have met through my years at 6 Music, Tom is one I feel especially proud to have crossed paths with. I’d never met him until we both found ourselves trying out for shows on what was then Network Y in 2001. We travelled back on the Tube together after we’d had our photographs taken and I couldn’t help but think, hey, I’m on the train next to TOM ROBINSON! So let’s support his gig. He’s not just there for the over-60s! (Indeed, he is often pre-recording in the studio next to the live one at 6 Music, and he plays host to a seemingly endless succession of tiny young bands, about whom he is unerringly enthusiastic and supportive. I like to think of him as a benevolent Fagin with a whole army of little indie urchins that he’s taken under his experienced wing. I’m not saying they pick pockets or anything.) I can also boast that I have played drums with Tom, when the 6 Music band got him up to play 2468 Motorway. That was not something I ever foresaw happening in my life! He really is one of the good guys, and long may 6 Music give him – and all those unsigned bands – a platform. That’s all we ask, you know. For a platform.