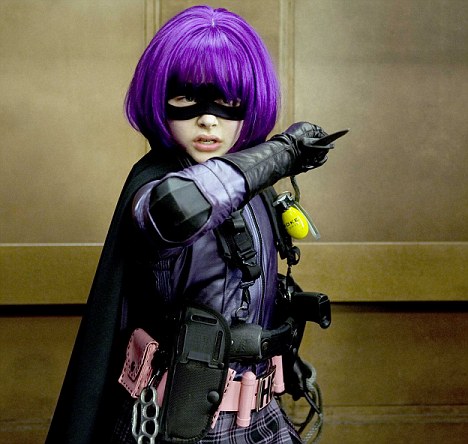 Oh dear, Christopher Tookey, film critic of the Daily Mail, doesn’t much like Kick-Ass, the new American action movie from Brits Matthew Vaughn and Jane Goldman, based upon the American Marvel comic by Brit Mark Millar and American John Romita Jr. I’ve seen it and agree with the consensus: that it’s a highly entertaining and knowing piece of superhero hokum, and yes, it’s incredibly violent in a way that’s usually described as “cartoon” but it’s actually jarringly realistic, as this is not a fantasy, it’s a hyperreal flesh-and-bone drama. It’s a 15 certificate. It’s sexually frank (there’s more than an allusion to how much Aaron Johnson’s geek protagonist masturbates in the first 10 minutes, with trousers around ankles and tissues being binned) and the language is blue from the start.

It’s shocking – it’s supposed to be – and at first seems pretty strong stuff for a 15. But when I was 14 I went to my first legal AA at the cinema – National Lampoon’s Animal House – and heard similarly rude language and saw similarly sexual scenes, including a number of what can only be described as bare breasts – so maybe not so much has changed in 30 years. What’s really shocking to me is the frothing overreaction of Christopher Tookey in the Mail, who gives Kick-Ass one star (fair enough; his view) and then starts the ball rolling by summarising the film thus: “verdict: evil.” That’s evil. This film is … evil.

I won’t reprint his review in full – if you’re interested, it’s here – but I feel duty bound to flag up certain observations and devious political points. “Millions,” he writes, “are being spent to persuade you that Kick-Ass is harmless, comic-book entertainment suitable for 15-year-olds. Don’t let them fool you.” From the off, he assumes his readers to be dimwits. He predicts that it will be “among the most influential movies of 2010. And that should disturb us all.”

His big beef: “It deliberately sells a perniciously sexualised view of children and glorifies violence, especially knife and gun crime, in a way that makes it one of the most deeply cynical, shamelessly irresponsible films ever.” That’s ever. I have seen this film. I did not see any “sexualised view of children.” A day later, I saw the new, much-celebrated new French drama Father Of My Children, in which the protagonist’s young daughters are seen topless, swimming in a lake. It is not a “sexualised” image, indeed it is one of innocence, but it is an image that could, by a disturbed mind, be interpreted as such. The film is a 12A. Why is Tookey not outraged at this? Because it’s not “hyped”, apparently.

His problem is Chloe Moretz as Hit-Girl, an eleven-year-old masked avenger played by a girl of 12-13, who commits the lion’s share of the violent acts in the film, and at one stage calls a bunch of villains “cunts.” She uses other bad language, but the c-word is played very skilfully for maximum shock effect. (She appears in costume and saves the life of Kick-Ass; the utterance of “cunts” is not casual, or throwaway.) Tookey writes that “the reason the movie is sick, as well as thick, is that it breaks one of the last cinematic taboos by making the most violent, foul-mouthed and sexually aggressive character, Hit-Girl, an 11-year-old.” That certainly makes it interesting, but again, I didn’t see Hit-Girl, or her alter ego Mindy, as “sexually aggressive.” The fact that she’s 11 is the point; she’s not sexual. Or at least, not to my eyes. But to Tookey’s, she is. “The movie’s writers want us to see Hit-Girl not only as cool, but also sexy, like an even younger version of the baby-faced Oriental assassin in Tarantino’s Kill Bill 1. Paedophiles are going to adore her.” Well, firstly, we can’t censor art, or anything else, because paedophiles might get off on it. We would also have to stop producing catalogues that contain children modelling children’s clothes. Or build walls around school playgrounds. “One of the film’s creepiest aspects is that she’s made to look as seductive as possible – much more so than in the Mark Millar and John Romita Jr comic book on which this is based.” (I disagree with that, by the way – the film’s is visually very faithful to Romita Jr’s designs.) “She’s fetishised in precisely the same way as Angelina Jolie in the Lara Croft movies, and Halle Berry in Catwoman.” Well, not precisely, as both of those figures are adults. Hit-Girl is shaped like an 11-year-old.

Oh, but hang on, Tookey has borrowed special paedophile spectacles through which to view the film: “As if that isn’t exploitative enough, she’s also shown in a classic schoolgirl pose, in a short plaid-skirt with her hair in bunches, but carrying a big gun.” Well, yes, she does appear in school uniform. But school uniform isn’t intrinsically sexy, otherwise the Krankies would carry an 18 certificate. “Oh,” he adds, “one of the male teenage characters acknowledges that he’s attracted to her.” This is true, but the geek who makes this comment on seeing Hit-Girl on TV is immediately admonished for the inappropriate nature of his observation. The joke is on him.

Tookey brands the film as “unimaginative”, “irredeemably bone-headed” and “cliched”, but these are subjective views to which he is entitled. (He also concedes that it’s “sporadically funny, efficient, and well shot”.) He also says it’s “morally fatuous”, which is more arguable. Yes, violence is meted out upon men, but these are bad men, who are also killers. It’s no more morally fatuous than any film in cinema history in which bad guys have been killed by good guys. Tookey clearly doesn’t “get” comic book movies, as he sneeringly uses the phrase “so-called graphic novels” which reveals a deep-seated snobbery against the form.

Inevitably, Tookey resorts to reminding us how broken Britain is, with reminders that – BECAUSE OF FILMS LIKE THIS! – children carry knives (yes, a tiny minority of them), and are having underage sex (“recent government figures revealed that in this country more than 8,000 children under the age of 16 conceive every year”), but surely this is a complex social ill, and not one conveniently explained by Hit-Girl wearing a skirt? Equally, “Worldwide child pornography is a multi-billion dollar industry.” Yes it is. But this is a 15 certificate film, aimed at people over 15. It is responsibly certificated to reflect the film’s content. I saw what can only be described as bare breasts aged 14 in Animal House, legally.

Later, he states that the “childish violence” is presented with “calculated flippancy, as funny, admirable and (most perversely of all) sexually arousing.” [my italics] Is it? I mean, really, is it? I didn’t get sexually aroused by the violence. It is not sexual violence, as it is meted out by an 11-year-old to adult men. They are not sexually aroused and nor is she. The only explanation for this observation is that Christopher Tookey is sexually aroused by the violence, or that he vicariously imagine that Daily Mail readers might be. The line, “in Hit-Girl, the film-makers have created one of the most disturbing icons and damaging role-models in the history of cinema” is pure hype. In the history of cinema? Come on!

He throws in “feral gangs” and “child soldiers”, just in case we’re not frightened enough of our young’uns. And he plays to the gallery with what I actually deem offensive references to James Bulger and Damilola Taylor. It’s the old join-the-dots between video nasties and real-life nasties. It actually requires a disconnect in the individual child’s brain for violence to be meted out to other children, not just a VHS of Child’s Play. Life would be simpler if we could blame all of society’s problems on a couple of violent films. I’m afraid it’s far more complicated than that. Tookey doesn’t call for the banning of Kick-Ass, like Alexander Walker might once have done, but the implication is there.

He says the film will get “an easy ride” from his fellow reviewers, “who either don’t care about the social effects of movies or are frightened to appear ‘moralistic’ or ‘judgmental’.” This is damning stuff. If I were a “fellow reviewer” I’d have a word at the next screening.