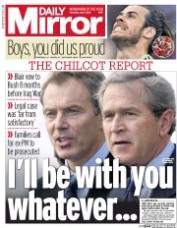 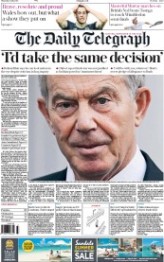 Some late news just in. There was no cast iron reason for this country to defy the United Nations and invade Iraq on 20 March 2003, shoulder to shoulder ie. behind the United States, and alongside Australia and Poland. (In that initial phase, the USA sent 130,000 troops, the UK 28,000, Australia 2,000, and Poland 194.)  The Iraq Inquiry, better known as the Chilcot Report, revealed to the world the following things that I and millions of others personally knew in our bones in May 2003, and which were basically confirmed by subsequent events: that Saddam Hussein did not pose an “urgent threat” to British interests, that flaky intelligence regarding weapons of mass destruction (WMD) was presented with “too much certainty” while its legal justification was “far from satisfactory”, that peaceful alternatives to war had not been fully explored, and that in invading Iraq the UK and the USA had “undermined the authority” of the UN. In short, the whole shit-show ought not to have happened.

Have we who believed Hans Blix and doubted the earnest words of Tony Blair wasted the last 14 years of our lives waiting to find out what we suspected all along? If so, we should be grateful that we had lives to waste; not everybody sucked into the conflict was so lucky. The families of the victims at Hillsborough (many of whom will have also opposed the war) will know this feeling: a combination of relief and fury after so many years being officially dismissed and discounted. No matter what the Dorian Grey painting of Tony Blair says, during those 14 years the world has unarguably become ever more dangerous and less secure, and thousands upon thousands of lives have been lost in the wars waged in the name of “stabilising” a region we – I hate to use that word, but it’s worth rubbing it in – we destabilised. The invasion may not have happened “in our name”, but I remain a citizen of the country that did it. An increasingly ashamed citizen. Many of today’s monsters were forged in the aftermath of the invasion, which, like a post-Brexit economy, nobody had properly planned for. So, rather than go over the coals one more time, or the Chilcot Report in mind-numbing detail, can we just consider the lies?

Historians often cite Watergate as a watershed moment when the public “lost faith” in its elected politicians. Certainly, the grotesque televised image of Richard Nixon declaiming in 1973, “I am not a crook” provided a pivot for this apparent awakening (a moment echoed by Bill Clinton’s similarly perjurious public address in 1998: “I did not have sexual relations with that woman”). But not only was Nixon not the first dishonest politician, he was not the first dishonest president. They’re all at it. Because power corrupts, absolute power corrupts absolutely, and, to quote Everything But The Girl, little Hitlers grow up into big Hitlers. The business of running a country, whether it’s as small as Iceland, or as vast as Russia, involves compromise. I guess it has to, like any relationship. In government or junta, commercial and civic interests must be served at the same time. An electorate, or a non-electorate, must be kept onside, for fear of deselection, or coup.

Sometimes, decisions made in the secret corridors of power have life or death consequences. Most of us, let’s be honest, couldn’t handle that. Indeed, the old truism that the very worst kind of people to be politicians are the people who want to be politicians resounds still. Running a country is an insane fantasy that most of us rehearse over breakfast (“If I was in charge … I’d making voting compulsory/ban mobiles in schools/put registration plates on bicycles/remove charity status from public schools/give automatic custodial sentences to internet trolls etc.”). We are currently going through a leadership election that will put someone else in charge of our country, at least one of whom will have been tied to a Leave campaign based on lies or assertions with no basis in fact. Whether she – and it is likely to be a she – is up to the job is only something we can discover by letting her do it. We came dangerously close to having Boris Johnson imposed upon us as our leader, thanks to the boneless leadership of David Cameron. The former is a man priapic on adulation who thought leading a country was his birthright; the latter seemed to treat the job as a sort of wheeze and couldn’t wait to put it behind him. Both are dangerous. Both went to the same schools. It doesn’t matter who you vote for, someone who was in the Bullingdon Club always gets in, right?

There is talk of a “disconnect” between people and politics. It’s why the inarticulate bully Donald Trump is presumptive Republican nominee when the commentariat dismissed him as a joke. It’s why the mild-mannered Jeremy Corbyn won a mandate from members of the Labour party in the vacuum after Ed Milliband and has since struggled to keep the Teflon-hearted Blarites within the PLP onside. And it’s why the Leave campaign’s parish magazines the Express and Mail were so effective in the peddling of myths. The balance of power now rests in the limbo between what politicians think they know about what ordinary voters know, and what ordinary voters know they know. It’s why we are one piece of paperwork away from leaving the EU after 43 years of growth and that racism has reared its ugly head again in a way not seen since the 70s – a decade which, by the way, wasn’t as good as the music, films or sitcoms made in it. Whether people are racists or simply voters struggling to replace the old certainties like jobs, security and community that have been taken away by successive administrations in hock to the free market and the City, they clearly don’t feel represented. Nor, by the way, do I. (My politics pretty much align with Corbyn’s, a man seemingly too Labour to be allowed to lead the Labour party.) 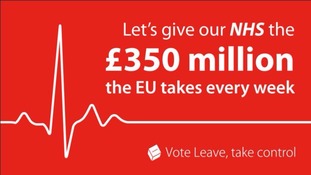 “Protest vote” is a catch-all phrase, simultaneously stirring and active, and negative and self-isolating. It can mean something passionate and personal: voting for an independent candidate, let’s say, in a local election, or voting Green, as I have done, even though there appears statistically to be no way the candidate can get in. But voting Leave in a zero-sum referendum to show the politicians that you no longer have faith in them is a protest only in theory; in actual fact, it is a vote for uncertainty. A malignant symptom of the current democratic malaise, it led the 51.9%  to opt to leave the EU because they had genuine, concrete reasons for wanting to “take back control” from Europe, the promise they were made by politicians who could barely agree between themselves whether they were pro-Europe or not. I feel sad that many people, with good reason, believed that to “take back control” meant some kind of meaningful independence. The crushing irony is that in “taking back control” from those fabled Brussels bureaucrats, Leave voters “gave control” to the right wing of the Tory party, a party that despises the jobless and the poor, and is dismantling the very state that might look after them.

We’re so jaded we expect lies to be told in election campaigns. And yet, we swallow the lies. That the Tories care about “hardworking families”? That £350m of “our cash” (Johnson, Gove and the rest were clever to make it sound like bureaucrats were picking our pockets) would be given to the NHS? By a party that seeks to privatise the NHS? More lies. That Saddam Hussein could get a chemical weapon to the UK in 45 minutes?

Here’s the irony. Tony Blair, who was unfortunate to be given a surname that contains the letters L, I, A and R, seems to think he has been cleared by Chilcot of actually, literally telling a lie to us, while Alistair Campbell is smug about being cleared of “sexing up” the intelligence dossier, but in buttering up the electorate, and Parliament, for war, they implicitly lied from the moment Blair told Bush he was “with him, whatever” in the 28 July, 2002 memo. Thereafter, war was not an option, it was a foregone conclusion, and any speech or comment that Blair made after that date which did not reveal the deal he’d made is in my eyes rendered a lie.

Here’s the killing joke: I think he’s telling the truth when he says that, given the choice, he would invade Iraq all over again.