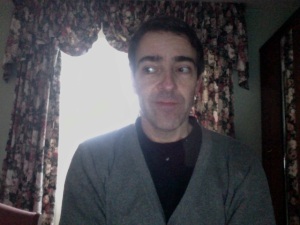 I know. It’s been a while. It’s been more than a while. A gentleman discerning enough to use an avatar of Mark E Smith asked me via the medium of social media the other day what had happened to my blog. He surmised, correctly, that I have been too busy to keep it up. The truth be told, this year has been one of working harder and earning less, a pattern clearly replicated across this whole stinking world. Although I’ve not been writing here, I’ve been writing. And although I’ve not been writing in the desired form of a script that has been made into a television programme, I have been scriptwriting. It used to be known as development hell, although it’s hardly a hell, as you do get paid a stipend to write a script, even if it never gets past the stage of being words on a screen. (Actually, I always print my scripts out to read them, as they don’t seem real until you are holding them in your hands. If they exist physically, you can pretend they’re being made into television.)

In the accompanying picture above (what would nowadays be called a “selfie”, although these were invented long before the camera-phone), I am sitting in a hotel room in Aberystwyth in Ceredigion, West Wales. The hotel is the Belle Vue and it’s right on the front. Here is the view from my window last night when we checked in at around 7.30pm after the five-hour, one-change train journey from London.

I love the sounds of waves crashing and seagulls cawing. Because I spent pretty much every summer holiday as a boy in North Wales, I feel very much at home in this country. I’ve spent more time in North and South Wales, though, and less in Mid-, and it’s my very first time in Aberystwyth. If you’ve been following the story, you’ll have probably guessed why I’m here. The groundbreaking Welsh/English detective noir Y Gwyll, or Hinterland, is set and shot in Aberystwyth. I am here, in a landscape you could not make up, in weather you’d usually have to put in afterwards, to effect what’s known in the trade as a “set visit”. That is, I’ve been invited to visit the set, which in this case, was an actual barn near a farm just outside Borth, where a temporary production base had been established under a gazebo.

I did take some pictures of the filming of a scene involving Richard Harrington as DCI Tom Mathias, Mali Harries as DI Mared Rhys and another actor as a farmer, but these may be embargoed, as series two of Y Gwyll won’t be airing on S4C (in Welsh) and then BBC Wales (in English and Welsh) until autumn 2015. There’s a one-off special on S4C on New Year’s Day, which is intended to sate fans of the show in the interim. (If you haven’t seen it – and you really should – it’s a case-of-the-week crime-solver that has its own broader arc about Mathias’s past, so you can dip in and it will still work.) I’m sure you’re aware that the show’s trick – which it didn’t invent, but is rare – is to film every scene with dialogue twice, once in Welsh, once in English (and some Welsh, where applicable), thereby literally doubling the work of the cast and crew, but in the process doubling its marketability in an international TV market, something that’s clearly working for them, having sold it to Denmark, Holland, Belgium, the US and Canada (on Netflix) and countless others. Not bad for a show set in Aberystwyth.

On our windswept arrival last night, Tash from the PR company (in charge of delivering me to my destination) and I repaired to a bar and cafe – highly recommended locally – called Baravin. While the cast and crew are filming, some based in Aber, others in Borth, many of them far away from hearth and home, this magnificently sited venue seems to be a magnet. It faces out onto the seafront and serves artisan pizzas, draught beer and something called an “espresso Martini”, which sounded like a terrible idea at the beginning of the evening, but a good one at the end of it.

At Baravin, we met Richard Harrington, Mali Harries (both of whom I appear to have known for years, or at least that’s the impression I got from the warm way they greeted me) and producers the voluble Ed Thomas and more quietly spoken Gethin Scourfield. We had a tremendous evening with all four. I didn’t take my dictaphone out, but we chatted about the show, and the way it’s produced, and it’s all “colour” for the feature I will write to coincide with transmission of series two in about ten months’ time. Our hosts provided plenty. Richard is dark and authoritative onscreen (if you’ve not seen Y Gwyll, you may remember him from Spooks), but in real life, he feels hewn from the same rock as his namesake Burton. An elemental figure, I of course blame him for talking me into an espresso Martini.

You sensed he was up for going after-hours, but the rest of us were knackered and opted for ending the evening when the bar did. (His co-star and producer/director were not even drinking.)

It being Wales, where the stars are visible in the sky, and a promenade, where the sea puts you to sleep, I slumbered hard, woken only once at 4am when two young women who had gone after-hours sang a modern pop song under my window from the pavement below. I could only admire them. 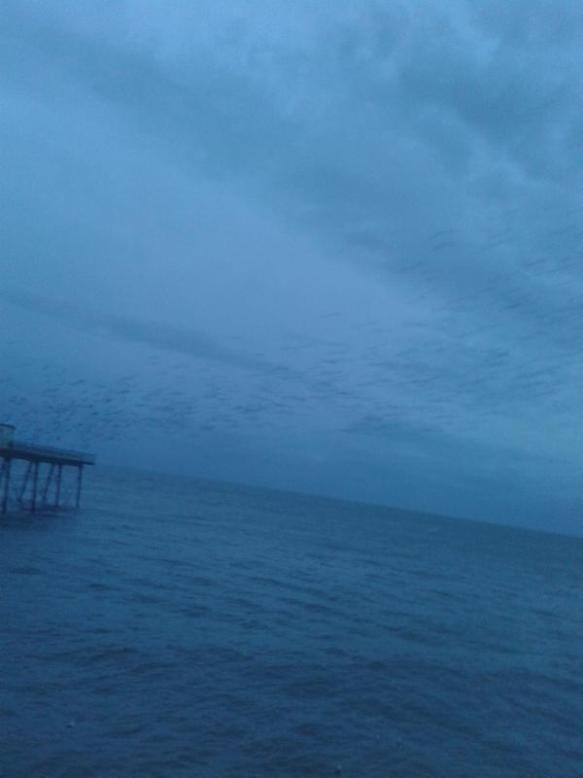 Tempted out for a pre-breakfast walk along the front to the pier this morning, I felt blessed to witness the murmuration of starlings, who shot out from under the Royal Pier and filled the sky. I don’t think my non-iPhone really captured the glory, but you can’t blame me for trying, presented with that. This may be a writer’s blog, but I’m painting a lot of this with pictures. 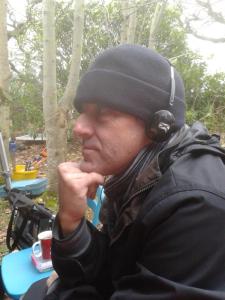 One full English/Welsh inside me, and we were off to the set. This is me, pretending to be a vital cog in the Y Gwyll machine, sitting on a plastic chair under the gazebo, watching a monitor and wearing some headphones so that I can hear the Welsh and English words being said by the actors into the microphones. I am well wrapped up against the cold. It would have been pathetic of me to even admit to myself that I was feeling the cold, as I was only on set for half a day, and these dedicated professionals do it for twice that long, every day, for weeks on end. 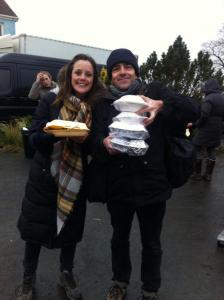 This photo depicts me and S4C Drama Commissioner Gwawr Martha Lloyd, whom I have met before, showing our frozen appreciation for the arrival of on-set catering in polystyrene boxes wrapped in tin foil and cling film. (For the record, I am holding two portions of main course and dessert, only one of which is for me.) After about five hours of being among the elements, it was the thought of getting into a warm car and being driven to a warm train station where a warm train awaited that was keeping me alive.

Ten hours on the train there and back, but 20 hours spent in the salty, reed-filled embrace of Aberystwyth and Borth, getting a boyhood Proustian rush from the Welsh signs, the stern, symmetrical, chapel-like Welsh houses and the sight of endless sheep. Ceredigion really is “Hinterland Country” now. If you know the first series, you will literally spot houses and bridges and garages you’ve seen on telly in real life. This is a show that, unlike so much geographically faked TV fiction, lives and breathes its authentic, living, breathing environments. Gethin and director Julian Jones let us accompany them on a location scouting trip to Borth where we trod infinite dunes and were almost literally run off private farmland after a wrong turn. 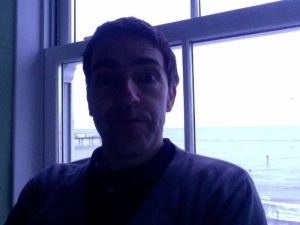 An unusual day in a writer’s life, and a rewarding one, whose printed fruits exist only in the future.