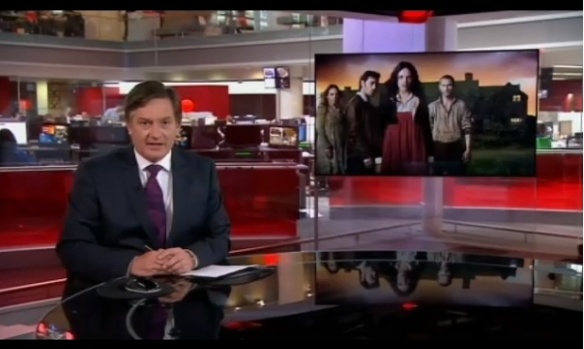 Two talking point TV shows on Telly Addict this week: BBC1’s top-notch Jamaica Inn, which found itself embroiled in a teacup-storm about the mumbling of tightly-wound character actor Sean Harris, whose performance as the dastardly Cornish innkeeper Josh Merlin was typical for him and catnip to his fans, but not helped in this instance by a “technical” issue that muddied the sound of the live broadcast of Easter Monday’s first episode. Cue: self-flaggelation by the Corporation on the News and elsewhere. (I watched it on catch-up, which suffered no such issue, so enjoyed the whole thing thoroughly – then again, I like straining to find the rhythm of a performance, if it’s well done – anyone who watched all of The Wire will understand how bracing it can be.) Also, there was the much-chattered-about Derek on C4, whose titular performance took flak when it first emerged, and to be honest, little has changed. Also, less controversially, unless you believe Bible stories to be sacred (so to speak), the Easter episode of the finite Rev on BBC2; and Boss on More4, which returned in confident style, even though its fate is sealed. And a bit of Mad Men that’s not a spoiler. That’s the kind of controversy I like to avoid.