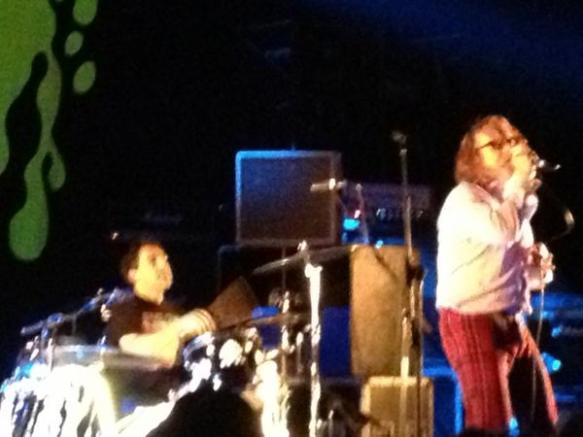 In may ways, I like the fact that the photographic evidence of what was, for me, an historic night, is all blurry and indistinct, as my memory of it will always remain vivid and forensic. On Saturday, November 10, 2012, at approximately 19:25, I drummed with a professional band, onstage at a famous rock venue, with a paying audience in attendance, for one song. The band was Cud; the venue was Brixton Academy (these days the O2 Academy); the song was Rich & Strange. It was an honour. It was a privilege. It was a treat. In the old days, we might have called it my Jim’ll Fix It moment, but that reference point has been all but erased from history. It did involve a flamboyant man from Leeds – or from a band formed in Leeds – who, with his three bandmates, fixed it for me, but there the similarities end.

The photo above, the first of many from the friendly world of citizen phone-journalism, was taken by Andy Goymer from what must have been “down the front.” In it, I am actually hitting some miked-up drums in public! This is massive for a failed musician! If you remember that the only other time I have played drums with a professional rock band was 20 years ago, in a club in Wakefield, soundcheck only, but the same song! (cue: well-worn but always good-value pictorial evidence, by Tim Paton) …

… you’ll understand the significance of this occasion. Cud were supporting Ned’s Atomic Dustbin, who were supporting my old pals Carter USM, for whom Brixton Academy is like a second home. It was, you’ll have spotted, an early 90s wet dream for indie fans of a certain age and temperament. I attended Carter’s first reunion show here, in November 2007, since which it’s been an annual fixture pretty much. Through thick and thin, I always seem to have been able to engineer crossing paths professionally with Jim Bob and Fruitbat, via 6 Music, Radio 2, or Word magazine, or, once, the Times, and the same is true with Cud, whose flamboyant oeuvre has become a byword for me whenever I fill in on 6 Music. I even managed to tie in one of my stints with an exclusive announcement of their summer dates. I had less of a concrete friendship with Ned’s, but spent a glorious day with them in Stourbridge about 20 years ago, and managed to engineer affable singer Jon Penney onto Roundtable along with Miles Hunt and Clint Mansell once, which was, again, for me, a little bit of history. As one hits one’s forties, such visitations to one’s twenties become swollen with significance, cultural weight and, well, larks.

Anyway, back to the present, and this side-of-stage shot – ah, the hallowed side of stage, where every music journalist who ever lived has always dreamed of being! – by John Bownas, who was far more “with the band” than I. 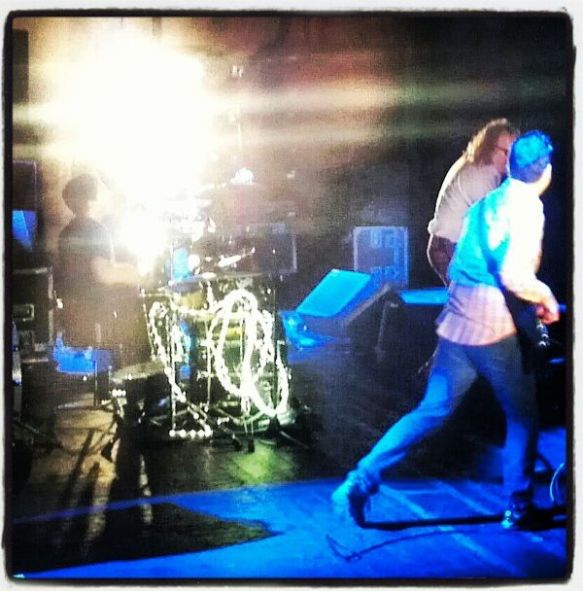 When you are the Drummer From Cud – and younger readers who don’t remember Cud won’t fully appreciate the significance of the band’s drummer – and you were added late to the bill, to open the show, you must arrive at Brixton Academy by 5.30 for soundcheck, and a very truncated soundcheck at that. (Oh, and you will play with the Ned’s backdrop; this is the fate of the first band on! It’s a great backdrop, mind you.) I must admit, I’d been nervous about my three minutes and 36 seconds in the spotlight all week. I am a drummer in my bones, but I don’t get to practise much, as I don’t have a kit, and haven’t had one since I left home in 1984. I’ve been lucky enough to have a crack in adult life when I’ve been recruited to the 6 Music band, but there are too many drummers at 6 Music, and they don’t need me any more. Thus, all practice of the fills, patterns, cymbal smashes and intricacies of Rich & Strange were done in my head, or, unobtrusively, on my bag on public transport. Luckily, they let me have a quick go around the kit during their short soundcheck, itself beset by problems with playback, so quite tense, even for a bunch this fun-filled.

That’s a nice shot of the outside of the famous venue, from Ian Moulds. And this next one is the actual Drummer From Cud, Gogs Byrn, in situ. The original drummer, Steve, was with the band when they first reunited, but has had enough of touring now, so Gogs, a Leeds sticksman of some repute, stepped in. Or sat in. And it to him that I owe the greatest debt for my Cud’ll Fix It moment. Firstly, he had it foisted upon him a bit, as he’s never met me and has no history with me. Secondly, they only had an eight-song set, and he was willing to give up one of their most famous songs to an ex-journalist with a death wish. I thank Gogs for Saturday night. He’s bloody brilliant, by the way. 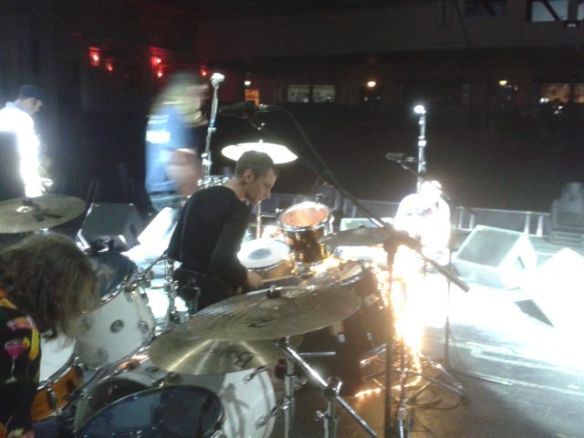 I took that shot, actually, from the stool of Ned’s drummer Dan’s kit, which Gogs’ was set up in front of. Again, the lot of the second support band! By the way, do not underestimate how awestruck I was, walking out onto that stage. Even with the venue empty, it was a head-spinner. I have been in the audience at Brixton so many times, in youth, and in adulthood (I rarely go to gigs now, but was here for Carter, Arcade Fire, Kasabian, Goldfrapp and Arctic Monkeys in recent memory), but never have I been out on that stage. What a pleasure.

Three in a row now, from Cormac, Julian (who runs 3Loop, who put out Cud’s lovely BBC Sessions box set, and have a Family Cat one imminent – order here), and Will Scott. Thanks to all for these. I might be a speck in them, and you’d need special Spooks-style scanning equipment to prove it was me behind the kit, but the context is important. 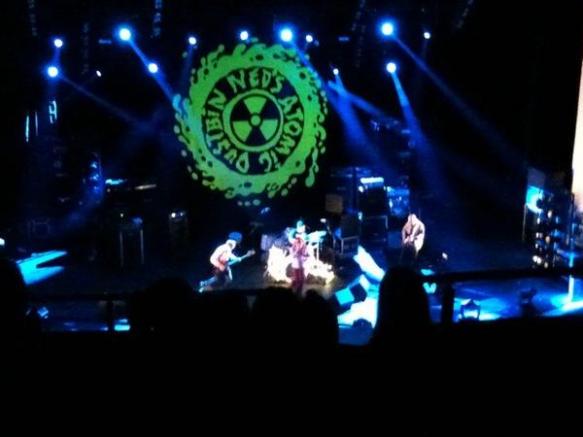 It was, inevitably, over very quickly. Three and a half minutes, in fact. We finished soundchecking about a minute before the doors opened, and had only about 15 minutes to get into character – and costume! – before going back out onstage. Carl, always a born frontman, changed into skin-tight tartan kecks and a frilly shirt sexily open at belt level to reveal a triangle of middle-years stomach. I had to make do with a new Cud t-shirt, as I hadn’t considered the showbiz element.

Here are the pros, relaxing backstage, after the gig.

And here’s the same three-quarters of Cud, with their temporary, one-song interloper.

And here is me and Gogs. 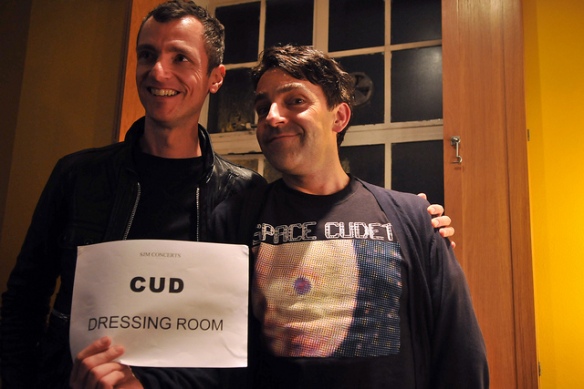 The latter two were taken by a professional photographer, Sara Bowrey, whose full set, which includes loads of superb action shots of Carter and Ned’s, is on Flickr here.

Needless to say, once I’d done my bit, and retired backstage to help Cud sup some of their rider before they headed off back up the M1 to get home before midnight, I morphed back into a happy punter, and … oh, I went to the upstairs “VIP Bar”, because I had an Access All Areas pass and it looks down on the auditorium. From here, like some tragic rock biz freeloader, I watched Ned’s tear up the house.

… And then I went into the venue for Carter, who were as magnificent as ever: just two old blokes with guitars and a backing tape, shrouded in dry ice, belting out hit after hit after hit, each one accompanied by people whose vivid, formative memories of the album 30 Something, means that they are closer to 50 Something. I wasn’t technically “down the front”, but I was to the side of the bit just behind down the front, and it was fabulous. The Impossible Dream a highlight, as it always was, and always will be.

Was it Carter’s last gig? Why would it be? Why would these bands whose heyday was 20 years ago stop doing it when there are enthusiastic punters who will happily pay good money to come and see them doing it? I had a nice chat with Jon, Rat and Alex from the Ned’s in the corridor, and in the VIP Bar, and they’re doing it for all the right reasons. They have day jobs. But when they play in Wolverhampton, as they are doing before Christmas, it’s like when Cud play in Leeds, or Carter play in Brixton.

I thank them all for proving that nostalgia need not be a disease. I can simply be a point around which like-minded souls can gather, and have a pint, and have a sing-song, and have a nod. A minor scuffle broke out in the mosh pit during Carter – just two lads with hot heads – and it was snuffed out so quickly, and the general feeling from those around it was, “Come on! We don’t do that sort of shit here.”

A big thanks to Cud, though: Carl, Will, Mike and Gogs, and their entourage, particularly Alaric, as he’s from Northampton, and brews real ale there. For Cud news, click here; for Carter, here; for Ned’s, here.