In July 1983, when I was 18, Peter Adamson – the actor known to and loved by millions as Len Fairclough on Coronation St, a character he’d played since 1961 – went on trial for the indecent assault that April of two eight-year-old girls in a swimming pool. As you can see from the blunt-instrument graphic used by the Sun newspaper, the lines between Adamson and his fictional persona were deliberately blurred. I remember the trial well, as I was an avid viewer of the soap at the time. I stuck the above graphic into my diary on Thursday July 21, mid-hearing, alongside this doctored collage from the same newspaper:

As you may be able to see, I wrote “GUILT” in pencil over Adamson’s suit, so I would be able to add, “He’s got guilt written all over him.” This was my 18-year-old’s idea of a joke. A casualty of trial by tabloid – and the red-tops were pretty despicable then, in their early-80s pomp – I had passed judgement before the court had. (It’s a shame I wasn’t more sensitive, but we cannot rewrite our own history.)

In the event, on July 26, the jury found Adamson – and by dimwitted association, Fairclough – not guilty. But it was immaterial; he’d already been tried and convicted in the public mind. Although he lived until 2002 and managed to get some theatre work, he was never again seen on Coronation St, having been written out back in February, before the arrest, ironically for selling stories to the tabloids. A sad figure by all accounts, he struggled with a long-standing drinking problem and died penniless after a 1991 bankruptcy.

The clinical term “paedophile”, although well established, was not in general use in 1983; it was certainly too long a word for the Sun. I suspect, as well as “dirty bastard”, Len will have been branded a “pervert”. I bring up his story partly because it has stayed with me, and partly because at least two equally well-loved Coronation St stars are currently embroiled in court cases over alleged sexual assault: Michael Le Vell, who’s played Kevin Webster since, coincidentally, 1983, and William Roache, the longest-serving Coronation St star of them all, having been Ken Barlow since the first episode in 1960. Le Vell goes to trial in September for 19 charges, including alleged sexual assault and the rape of a minor; Roache goes to Crown Court next month for the alleged rape of a 15-year-old in 1967. Both men deny all charges.

These big tabloid stories interest us – and, one assumes, appall us – because they are men in the public eye. In the wake of Jimmy Savile, which I wrote about at the time, and Operation Yewtree, the truism is to say that each week discredits another previously loved celebrity from the 60s, 70s and 80s (which covers a lot of our childhoods). If any of these multiple, often historic accusations turn out to be true – and when Stuart Hall pleaded guilty to indecent assaulting 13 girls, aged between 9 and 17 years, between 1967 and 1986, he became the first to cross over from lurid speculation to actual admission of despicable deeds – then it will say dark things about society in the not-too-distant past.

I’m not really here to talk about “the culture” that permitted a now unacceptable degree of “harmless” fun between powerful men and often much younger women, and children, nor about how boundaries have been more clearly drawn in the more enlightened decades since, as to do so often risks sounding as if you excuse the bottom-pinching that was the tip of a much more sinister iceberg. If an ex-Radio 1 DJ is accused, historically, of groping a female work colleague in the 70s, we should not excuse it just because it was time of Carry On films and Benny Hill, any more than rape should be excused because the victim was wearing a skirt. It’s very likely that the victim either didn’t come forward because she feared he or she would not be believed (that’s certainly the case with Savile’s victims), or that he or she did come forward and wasn’t believed.

This past week, Stuart Hazell, who was not a celebrity but achieved a level of ubiquity through his disgusting deeds, was imprisoned for a minimum of 38 years for the murder of his partner’s 12-year-old granddaughter. At the trial, some pretty disturbing insights into this 37-year-old man’s character emerged. With barely time to catch our collective breath about the prevalence of this kind of abuse and murder of children from within families, we saw seven members of a “sex grooming ring” in Oxford convicted at the Old Bailey of abusing six girls, who were targeted, drugged and suffered “sadistic abuse” while aged between 11 and 15. The details are too horrible. I won’t repeat them. Difficult debates are being had about the ethnic background and religion of the men, which largely matches that of the nine convicted last year after a Rochdale sex trafficking ring was exposed. However, there’s a much bigger coincidence, which links Stuart Hall to Stuart Hazell and every other sex offender in between: they’re all men.

Suzanne Moore has been writing passionately and controversially about this subject in the Guardian from a long-range feminist perspective (today’s column was particularly furious). Her concern is not just the seeming ubiquity of male sexual assault, whether historic or current, it’s the failure as she sees it of men to do something about it. She has harsh words for the authorities, social services, the police, the media, for failing to act, but she asks, legitimately, why women seem to be more enraged about it than men. Does that make all men culpable?

This line unfortunately takes us down the hardline Andrea Dworkin route (the uber-feminist wrote, in a 1987 paper called Intercourse, “Physically, the woman in intercourse is a space inhabited, a literal territory occupied literally”), and is not helpful, especially when most men – surely! – are not potential rapists, respect and like women, and know that a child is a child.

I’m quick to say that society is to blame, but that’s not to let individuals off the hook. If you talk about “a crisis of masculinity” it suggests you wish a return to the good old days when men were breadwinners and “masters of the house”, and I have no love for those Victorian values. The pressure on men today is not to be “the man” but to be a more caring, open-minded, feminised member of a family or social group. You might say that men are not born this way; to be the leader is somehow in the DNA of the hunter-gatherer, the physically stronger sex, the Martian (if we really are from Mars). But society changes, for the better, usually, and to fail to adapt is to die.

I re-educated myself in the 80s, taking onboard new information, discarding orthodoxies handed down to me from less enlightened times, and adjusting my behaviour and my thinking accordingly. This was not unique for the time. (I also went to art school, a more effeminate choice than most, and was in a minority as a male at my halls of residence and at college, which can only have had a good effect on me. I also looked effeminate, by choice, and was called a “poof” often in my teens, which galvanised my instincts about sexual equality.) I really do worry about subsequent generations who have grown up with available 24-hour porn, and especially those young enough to have come of age in the post-Loaded era of Nuts and Zoo. Those boys are going to have to do a lot more adjustment than I did.

Anyway, there’s a link between casual, seemingly benign sexism among male friends and unspeakable acts. I am not a psychologist, but the need to wield power must lie at the heart of sexual assault. To abuse, to rape, to threaten, to kill, are all acts of power. Stuart Hazell wanted something that was forbidden under the laws of the land, but he could not stop himself from taking it. Once the switch flicks, men are capable of bad things. We all do and say things we regret, and relationships break down all the time, and we can find ourselves saying unkind things to people we love, but all of this takes place within boundaries. To raise a hand is to cross that boundary; to break the law is to cross another one. 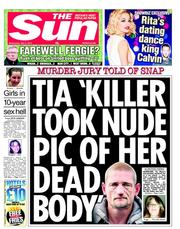 Tabloid headlines never tell the whole story. They paint men as “evil”, and quote relatives of victims who wish to see them “hanged”. The headlines above from the April Jones and Tia Sharp cases are designed to lure us in on our basest instincts. The “goodies” and the “baddies” are clear cut in the blunt-instrument tabloid narrative, but the stories also offer voyeurism, and that’s where a lot of the bad stuff starts: looking at things you shouldn’t look at, or looking at things that you should look at, but looking at them in a funny way.

We do not yet know if Rolf Harris, or Michael Le Vell, or Max Clifford, assaulted anyone, although we do know that their careers are likely to be over, even if they are acquitted. We live in suspicious times. (Anyone else see Paul Shane’s name the other night and think, “Oh no, not another one”, before sighing with relief when you found at that, no, he had only died?) The historic cases and the contemporary ones tell a sad story about men. I am, at heart, a self-hating man, in that I have no great love for my gender. I am not perfect, but I do consider myself a feminist and have a pretty sensitive radar to everyday sexism.

I felt very uncomfortable about the fact that, for no real narrative reason, and in a 12A certificate film, Alice Eve stripped down to her underwear in Star Trek Into Darkness. This was a Nuts moment, pandering to the young male’s worst instinct, which is to ogle and objectify. It’s not a trivial matter. Stamp this sort of thing out and you get to the root of the problem: some men hate women and don’t even realise it.