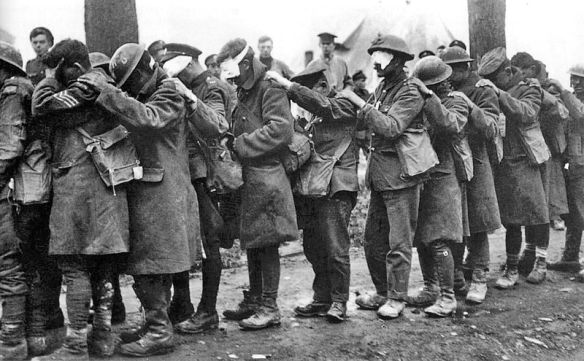 Let’s get this out of the way first: I am against chemical weapons. This really ought not need stating. Who, but a psychopath, would be for chemical weapons? However, after posting the following comment on Twitter the day before yesterday, it was implied by a join-the-dots minority that if I don’t believe it’s right for “Western allies” to bomb Syria, then I must approve of the use of the enzyme inhibitor Sarin on Syrians.

As you can hopefully see, I was merely trying to expose what I see as the hypocrisy of American outrage at what John Kerry called Assad’s “cowardly” use of chemical weapons. (Anything outside of hand-to-hand combat might be defined as “cowardly”, but that’s a semantic quibble.) To take the moral high ground and start handing down judgements, you’d better be able to defend your position. While 300 or so re-Tweeted my statement wholesale (including Chuck D, one of the more surreal episodes in my life, I’ll be honest), plenty took exception to the link I was making, arguing that Agent Orange was a “biological” weapon only intended to destroy 13% of the vegetation in another country; that the comparison was worthless as it happened over 40 years ago; and that to hand-wring about US warmongering was to let Bashar al-Assad off the hook and – by implication – do a thumbs-up gesture to chemical attacks. 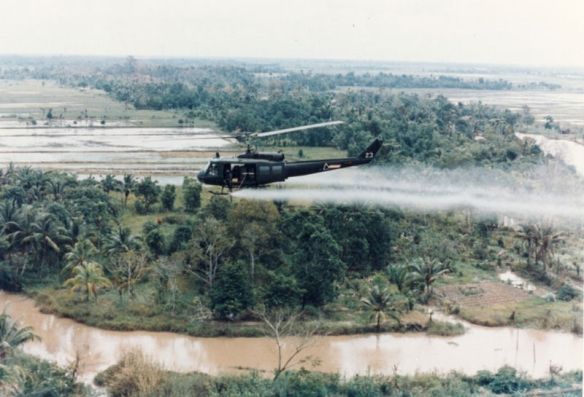 Hey, let’s be lenient to the Kennedy and Johnson administrations, and say, OK, they only intended to decimate the trees, plants and crops by dropping millions of gallons of Monsanto and Dow herbicide mixed with jet fuel on rural South Vietnam between 1962 and 1971, and that they only truly accidentally killed and maimed hundreds of thousands, and caused untold thousands of future birth defects. (Not to mention health problems from leukemia to lymphoma caused in US service personnel exposed to the same toxins – almost 40,000 disability claims were made against the US government as a result.) This was chemical warfare, pure and simple; it’s just that such defoliants were not subsequently banned under the Chemical Weapons Convention treaty of 1993, so they must be alright. An arbitrary “green line” is thus drawn.

To be honest, whenever the UK gets globally trigger-happy – and David Cameron and his Bullingdon pals seem currently gearing up for a whizzo “arm’s-length” adventure that is pretty much guaranteed not to dirty their hands – I get nervous. Like them, I lash out, but with words only. I grasp for historical comparisons and chinks in armour, and Twitter is a fast-typed medium. It’s the only one I’ve got when I have no time to blog.

At times of war, I become a cartoon lefty with a CND badge. I make no apology for that. Although the defoliation of Vietnam happened in my lifetime, it did not cross my young radar at the time. When Thatcher sent a thousand to their deaths in the South Atlantic in 1982, I felt that deep sense of powerless dread for the first time, and I’ve felt it again, all too regularly and under various administrations, ever since – none more deeply than during the first Gulf War, and none more profoundly than on the eve of the illegal invasion of Iraq in 2003, against which I marched twice, in disbelief that a Labour Prime Minister would form a human centipede with George W Bush, Dick Cheney and Donald Rumsfield.

I’m getting that dread now. I can feel it in my chest. It’s hard enough coping with a recession, without war to worry about. And the Middle East is not a region to be messed with, as “the West” knows only too vividly, still wiping its bloodied hands after two previous suicide missions. If “the West” fires missiles at Syria, it risks making matters worse, not better. Assad seems unlikely to back down; he’s clearly a bit of a chinless nutcase with entitlement issues, whose monarchical authority has been under siege since the Arab Spring (remember that?), and whose big-stick regime is propped up by Iran, Russia and China. If we bomb his people, that’s great PR for him in his nice suit with his nice wife.

The position of “the West” seems to be: shooting your own citizens and blowing them up is acceptable – as is arresting, detaining and torturing them under “emergency” powers, which the Assad family has been doing since 1963 when it seized power and set up its own quasi-royal line for perpetuity – but using chemical weapons on them is unacceptable. (We’ve heard talk of this “red line” that has been crossed, which is in effect a legal one, not a moral one in any case. This is why I made my original comment about US “outrage”. Why wasn’t the Obama administration equally “outraged” when Assad’s troops first fired on Syrian citizens in July 2011? As for the UK and France; we helped carve up the Middle East in the first place in our colonial pomp, but for some reason can’t resist donning the flak jacket and going back to knock on its door and run away.)

I understand that the world in which we’re living exists within a precarious framework of legality in terms of warfare, and the “rules of engagement” are our shared figleaf of decency while trying to kill each other. Conventions are agreed. Treaties are signed. The UN sits and debates. Motions are passed. Threats are made. Counter threats are made back. The Hague is constantly cited. Despots are supposed to be brought to justice, but are often just shot, or left to their own people to dispose of. If Assad has broken the law – a law which almost randomly precludes regimes from spraying certain listed chemicals on its own people as that’s, like, really out of order – then arrest him and put him in the dock. I am anti-chemical weapons, but then, I am the warmonger’s worst nightmare, as I am also generally anti-weapons. The multi-billion dollar defence industry would collapse if I had my dream. 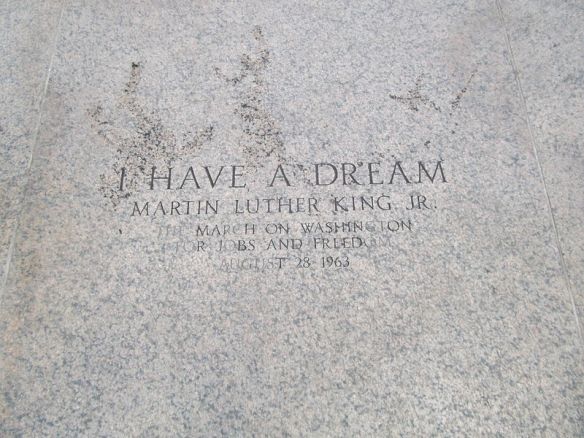 It struck me yesterday, as we joined hands across the world to celebrate those stirring words of Dr. Martin Luther King on the steps of the Lincoln Memorial on August 28, 1963 – at a time, significantly, when many young black men were fighting and dying in South East Asia for a country that was two years away from enshrining their right to vote – that the world has not progressed that much in the intervening half-century in terms of morality and consistency. We have better technology, and can kill and maim from even greater distances, remotely and cleanly, but we still kill and maim. In the 1960s, hundreds of thousands of Americans were prepared to march for causes they believed in (a quarter of a million heard Dr. King’s entreaty for “freedom to ring”). Obama may be the first black president – a democratic achievement beyond King’s wildest dreams – but he is currently gunning to gun civilians down. If he had his way – and if he sidesteps the UN, he is no better than Bush – the Xbox missiles would be raining down tomorrow. Tomorrow!

I haven’t voted Labour since 1997. If Ed Milliband allows this country to bomb another one, I will not vote for them again, any time soon. It is with mixed feelings that I note the number of Tory MPs currently ranging against Cameron’s bellicose wishes – around 70? – as I did not expect to agree with any of those bastards on anything. But to vote “no” to military action is not to vote “yes” to chemical weapons. Remember that. A man called “Greg” Tweeted me and Chuck D overnight – asking us how we’d like our families to be sprayed with Sarin. That showed us, right? For we would not like our families to be sprayed with Sarin. Fuck me, while there are people out there using that logic, we’re in trouble.

And stop shooting the badgers.