We are gathered here today to celebrate what I’m going to have to go out on a critical limb and call “the genius” of Ben Wheatley. I have never met the man – although I’d like to – but his work has given me much to chew on since making his no-budget debut in 2009 with Down Terrace. I’m man enough to admit that I didn’t see this at the time, but the sizzle it created drove me to Kill List in 2011, which sealed the deal. (And I’ve seen Down Terrace since, on the telly, which is herewith significant. This means I have discovered Wheatley in the wrong order, but I plan to atone for that sin.)

A Field In England comes only about seven months after the aggressively marketed release of Sightseers, one of my Top 10 films of 2012. (I put Kill List into my Top 10 of 2011.) How can this be? It’s a faster turnaround than Woody Allen. Well, A Field In England is a little different. It’s not as if Kill List or Sightseers were CGI-dependent blockbusters, but A Field is more like a first feature than a fourth, in that it’s been shot on a shoestring in a single location and has a principal cast of five. (It’s difficult to get hard numbers, but it looks as if this cost £300,000, compared to Kill List‘s £500,000. It doesn’t take a studio accountant’s understanding of the film business to know that this is not very much.)

What’s actually unique about the film isn’t the film, but its release. It made history on Friday when it debuted at selected arthouse cinemas, on DVD, on-demand and, most thrillingly, on free-to-air TV (namely, Film4). I say “thrilling” not just because a film this earthy should by rights be seen terrestrially, but because Freeview is surely the riskiest channel, as it were: it’s tantamount to inviting people to see it for nothing. As a film writer, I am able to see films for free, but often choose to see them at the cinema, where I pay for them, so I hope I haven’t scuppered the experiment by watching it on Film4. Having seen the trailer at the cinema a number of times, I know that Laurie Rose’s black-and-white cinematography is stunning, and merits a larger canvas. (It’s also pretty amazing on a small screen, at once making this 17th century period piece seem old and musty, yet digital-clarity new.) 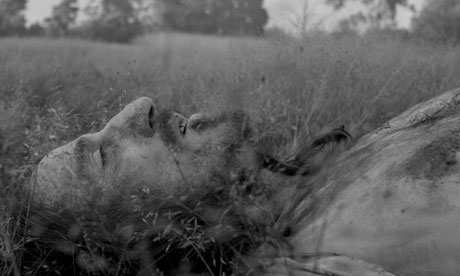 Even Sightseers, Wheatley’s most accessible film, is challenging viewing. And that’s all to the good. But you’d have to say that A Field is his most “difficult” work, despite feeling more formal in certain ways. It’s not going to be for everyone, and nor, one suspects, is Wheatley (until he sells out and directs an X-Men movie!), and there are moments here that descend, or ascend, into hallucinogenic experimentalism. It’s a history play only in that it cleaves to 17th century-sounding speech patterns and makes a backdrop of the Civil War against which our four deserters embark upon a misadventure into witchcraft.

Reece Shearsmith is impeccable as the scholar on the run from his master, the “coward” who cannot handle weapons who succumbs to the orders of Michael Smiley’s Irish alchemist. If I tell you that the other four men literally drag the talismanic Smiley into the field by pulling on a thick rope, you’ll have to run with it. This field is one from which there is no escape, ringed as it is by a forcefield of magic mushrooms that cannot be crossed. Shearsmith, who at one point seems to fall under Smiley’s spell and becomes a divining rod for buried treasure, is captive of a soldier who believes he can reach a fabled alehouse, but too gets distracted by Smiley’s promise of riches. You may not recognise actors Peter Ferdinando, Ryan Pope and Richard Glover, but you’ll have glimpsed all in various character roles (Ferdinando was in The Mimic; Pope in Ideal, which Wheatley directed; Glover in Sightseers), and all immerse themelves here, looking suitably mud- and shit-stained.

There is violence. There are visions. There is cruelty. There is scatology. There is humour. But how to categorise a film whose visual and thematic reference points – so exhaustively catalogued by Kim Newman in Sound & Sound – range from Peter Watkins’ Culloden to Witchfinder General? What Wheatley and his screenwriting/editing wife Amy Jump have created here is something new. How often does that happen in a medium that sometimes – like pop music – feels exhausted of possibility? I found myself transfixed, not just by the imagery, and the down-and-dirty acting, and the vast leaps between dots that refused to join up, but by the decision to have the actors form still-life tableaux, and by the music from Martin Pavey and Jim Williams, which blended ancient folk song with rumbling unease.

Wheatley’s career does not hinge upon the success of A Field In England, as it’s Film4’s pioneering experiment (or, more specifically, that of its innovative Film4.0 arm), not his, but the collision of one couple’s oddball vision and one company’s equally groundbreaking business plan, strikes me as vital and encouraging. (You know how much the current government hates the arts, except for the bits of the arts it does like? This feels like a bit they won’t ever like, and for that reason, it matters.)

While interviewing Simon Pegg, Nick Frost and Edgar Wright last week, we fell into discussion (for self-evident reasons) about films you could watch again and again. I watch a lot of films, and I have long concluded that some films are perfectly good, and not theft of two hours of your life, but at the same time you never need to see them again. Ben Wheatley’s films demand to be seen again.

It’s good to get that down in black and white.