Thanks to extensive coverage in all BBC-hating national newspapers – ie. all national newspapers – we know that the Corporation dispatched “almost as many” reporters, presenters, producers, technicians and support staff to cover this year’s Glastonbury festival as it did last summer’s Beijing Olympics: about 400. Sky News described it as a “sun-soaked event” (counter to the newspapers’ preferred caricature of a “mud bath”), as if to underline the mealy-mouthed assertion that this was a massive “junket”; Matthew Elliott of the purple-faced TaxPayers’ Alliance announced, “All 407 staff can’t be there doing proper work.” Well, sorry, but I think providing three days of output across three channels and red-button interactive services as the festival’s worldwide broadcast partner probably counts as proper work, even when it’s sunny and Dizzee Rascal’s doing Bonkers. And I bet the toilets and mobile reception were better in Beijing.

The question mark hangs not over whether 400-plus BBC employees were working, but whether what they were working on is any longer worth the almighty faff. I find myself in a relatively decent position to judge: a moderate veteran after half a dozen working Glastonburys between 1989 and 1995, I had retired from the annual pilgrimage with no inclination to return. Then, after a rash, sherry-influenced decision at Christmas, I agreed to return, older and wiser and ready to be dismayed by how, hey, corporate and sanitised it had become. I camped for five days without the aid of a backstage wristband or freebie ticket. And guess what? It was just as vast, unfettered and bamboozling as before, the cumulative effect quite unlike either the family holiday or wartime conscription of modern shorthand. Having happily kept up in the intervening 14 years by watching Glastonbury on telly, I was struck by the vast sensory chasm which – more than ever – exists between the event itself and the way it comes across on BBC4, or Sky News, or in a pullout souvenir in the Observer. More Glastonbury coverage does not mean better Glastonbury coverage.

The armchair music festival season now begins in early June with the Isle Of Wight – broadcast partner ITV2; hosts Fearne Cotton, Rufus Hound; Absolute Radio “set up camp [no they don’t] … to bring listeners around the UK exclusive live performances, interviews and backstage news and gossip.” Come September, the home festivalgoer will have “experienced” T In The Park (BBC3, Edith Bowman; Radio 1; Radio Scotland), Reading/Leeds (BBC3, Edith Bowman, Zane Lowe; Radio 1), V Festival (4Music; Absolute), Bestival (C4; 4Music; Radio 1), Latitude (Radio 2, Stuart Maconie, Dermot O’Leary, Claudia Winkleman, Janice Long; Radio 4; 6 Music), Cambridge Folk Festival (Radio 2) and T4 On The Beach (C4, Steve Jones, Miquita Oliver). Although “Glasto” – as even Andrew Marr now calls it – continues to occupy a regal place on the calendar, it too gets puréed into indeterminate, flag-and-kagoule mush by all this relentlessly upbeat, uncritical, blanket reportage of anything that steps onto a stage, or into a puddle. Festival season is to a certain type of thirtysomething, jeans-wearing, Ting Tings-loving presenter, what pantomime season is to dwarfs. For the rest of us, it’s a surefire way of growing bored of live music. I texted civilisation during Neil Young’s set on the Pyramid Stage and ascertained that he was “boring” on TV; in situ, on a warm evening in Avon, he was mesmerising.

The sad fact is, Glastonbury and the other major pasture-based gigs are now part of the arts furniture, slotted in between Glyndebourne, Hay, Edinburgh, Cannes, the Proms, even the non-horsey bits of Ascot: all subject to their own set of visual and written clichés. A glance through the Telegraph’s online “picture gallery” from Glastonbury is dominated by fragrant young ladies and apple-faced kids in the mud, despite the fact that it only rained once and the ground was bone dry by Saturday. I particularly liked, “Two girls walk through the site with blow-up airbeds.” Pictorially, Glastonbury is the new A-Level results for newspapers like the Telegraph with no real interest in the music or the vibe.

In 1992, the NME made music press history by turning its Glastonbury coverage round by – gasp! – the Wednesday after the festival, rather than waiting a full week to call in all the copy. Why hurry? Nobody expected to read about it the moment they got home in those pre-enlightenment days. Nowadays, Q magazine comes out daily, onsite. And yet, if it didn’t, the festival would go on. When Michael Jackson died, reporters were desperate to tell the world that a grief-stricken hush had fallen across Worthy Farm. It hadn’t. We were a bit surprised, and then got on with eating a burrito and joining the queue for the Orange phone-recharging chillout tent.

In short, I shall treat all coverage of Ascot with extreme suspicion from now on.

To quote my own blurb from the Guardian website: “Telly Addict Andrew Collins continues to look beyond the World Cup for essential TV and finds major head-scratching new drama The Honourable Woman on BBC2, revisits the dark Gothic horror Penny Dreadful on Sky Atlantic during its end-of-season crescendo, and admires two arts documentaries: Imagine … Monty Python: And Now For Something Rather Similar, and Rebels Of Oz with Howard Jacobson, both on BBC2. Plus, a sublime fake ad from Last Week Tonight With John Oliver on Sky Atlantic.” Now, back to the World Cup …

Having scoured all the radio listings for the week ahead in the Saturday and Sunday papers, it seems clear that on Tuesday, a number of other programmes are being highlighted and chosen as picks of the day. But I would like to mention this one: 3D In Perspective, a half-hour documentary that’s on Radio 4 on Tuesday at 11.30am and thereafter, more conveniently, on the iPlayer.

I don’t get to make that make radio documentaries, but when I do, it always makes me wish I did more. In fact, a nice man at the FX Quiz on Wednesday approached me afterward to praise The G Word, the documentary I fronted for Radio 2, two years ago, about Goth. It was lovely to meet someone who’d heard it. I am careful not to absorb too much of the credit for these things: I may be the narrator, effectively, but all the work is going on beneath the surface. In the case of The G Word, it was a BBC producer called Helen.

In the case of 3D In Perspective, it was an independent producer called Tamsin. Sometimes, as with a documentary I presented for Radio 2 about Jaws, and one I presented for Radio 2 about tribute bands, you tweak and edit the script to suit your own style and sit in a booth and read it out. But I was a lot more heavily involved with the creation and making of this one, and this makes it all the more gratifying that I think it’s come out so well. Tamsin had the impossible task of honing hours of material down to 30 minutes, and having heard the result, I think she’s done an amazing job. All I can say is: I was fascinated by the subject, and by the insight of our many learned contributors

This is the official blurb for the programme:

Bringing together the science of 3D television with a wide-ranging history of art and entertainment, Andrew Collins examines our centuries-old fascination with representing the world that exists in three visual dimensions. In modern 3D entertainment, today’s technologists are fighting the same battles with geometry, depth of field, light and texture as 15th Century painters. Award-winning visual effects supervisor, Paddy Eason discusses the debt that 3D imaging owes to its painterly predecessors.

At The National Gallery, art historian Professor David Ekserdjian explains how, from the changing shape of a canvas to the arrival of oil paint, the architects and artists of the Renaissance, challenged our notions of reality. Andrew enters a world of optical illusion, trawling piles of perspective pictures and stereo photographs at The Bill Douglas Centre for The History of Cinema and Popular Culture. Lecturer in Victorian Studies, John Plunkett explains, the appeal of 18th and 19th century optical or ‘philosophical’ toys, made possible by good lenses and mirrors. Often dismissed as novelty, they emerged from groundbreaking research on the physiology of vision.

The history of 3D is littered with failed technologies, including 3D films that predate cinema sound. Professor Neil Dodgson from The Computer Laboratory in Cambridge is a 3D expert. He outlines the obstacles, in particular the poorly paid projectionist and ultimately the limitations of human vision. Neuroscientist Dr Sue Barry, understands the visceral appeal of 3D. Aged fifty, she experienced her first thrilling sense of 3D immersion after years of being ‘stereoblind’ and suggests why we are so preoccupied with experiencing virtual 3D space.

It is, as they’ll say at the end, a Testbed production for BBC Radio 4. If you seek it out, I hope you like it.

It was a pleasure to be asked to “say a few words” at the launch of this year’s Museums At Night initiative at the soon-to-reopen Florence Nightingale Museum on the South Bank last night. For more about the excellent, nationwide Museums At Night event, which takes place over the weekend of May 14-16, visit their website – needless to say, there are a lot of sleepovers and candlelit tours and late openings up and down the land, in an effort to get people through the doors of our museums and galleries. I’m very happy to support this, as I love museums and galleries, and, as I said in my speech, I have gazed in wonder at the pre-photographic composition of Las Meninas by Velasquez at the Prado in Madrid; I have stood in awe and experienced the tragedy and suffering in Picasso’s Guernica at the Reina Sofia; I have seen the backs of 50 mobile phones being held in the air at the Louvre in Paris (I think the Mona Lisa was behind them, somewhere); but I have also been round the Teddy Bear Museum in Dorchester and been frankly creeped out by the human-sized bears in Victorian costume. (Incidentally, you can see the latter by night over the weekend, too, if you’re in Dorset.) I have been interviewed by Culture 24, who are running the event, on their website.

I went on after former Culture Secretary Chris Smith, or Lord Smith of Finsbury as he is now, who gave an enthusiastic welcome and didn’t use notes, which is always impressive. I did have some notes, but my enthusiasm was just as sincere.

As the event was, like the teddy bears, Victorian-themed, we had Florence Nightingale herself wandering about, listening to people’s hearts with a stethoscope; a close-up Victorian magician, who might well have been the devil, as he really did escape from some handcuffs whose padlocks I had personally locked and checked (he’s called The Great Misto); and I had my portrait cut out by Sarah Goddard of Visage Silhouettes, who is only one of half a dozen silhouettists in this country.

She was very kind to my chin, don’t you think?

So, an unusual way to spend a couple of hours, in a very hot museum in a hospital, sipping wine with at least one Lord (who, incidentally, I buttonholed about 6 Music and he seemed largely in favour of it being saved!) and genial Danny Robins, the writer, presenter and comedian. Thanks to Culture 24 and photographer Charlotte MacPherson for use of the pictures. 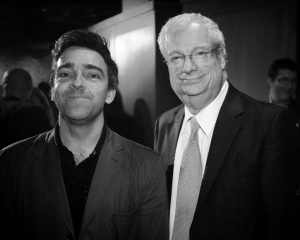