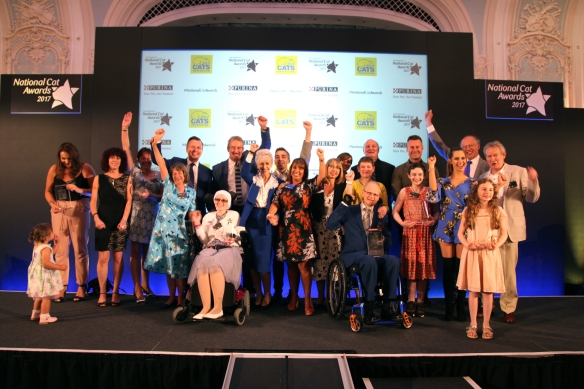 Lily, Phoenix, Pixie, Layla, Missy, Tilly, Harry, Mittens, Percy, Fish “Bean” Bandito, Spike, Tank, Charlie, Genie, Nala, Felix, Lunar and Sadie Ellenore – these were the stars of the show, but none of them were actually at the Savoy in London to bask in their own glory, as they are all cats. The National Cat Awards 2017 took place yesterday lunchtime – my second time as a judge, this time part of the panel judging the overall Cat of the Year from the five individual category winners – and it was another glorious occasion. It’s quite something to be in a ballroom of 200-plus people who you can guarantee are all cat lovers. John Challis, aka Boycie, announced from the stage that he had not previously been one, but was now “a cat person”. He received a massive cheer, as if perhaps this was a religious meeting and he had converted!

Cats Protection, celebrating its 90th year in 2017, is my favourite charity that I am not a patron of. (This is my favourite charity I am a patron of.) I am, however, a tireless supporter of their good works in rescuing, re-homing, neutering and raising awareness about the welfare of cats. Cats Protection helps around 190,000 cats and kittens per year through a national network of 250 volunteer-run branches and 34 adoption centres. These amazing volunteers rehome around 46,000 cats a year, more than 100 cats per day. (They even offer emotional support to owners going through the loss of a pet.)

I support them by helping to raise money and by promoting them. I helped launch this year’s awards in March by speaking to every radio station in the UK with genial chief exec Peter Hepburn.

Last year, I was thrilled to be a part of the judging process for the first time, which involves watching the individual films made by the charity of the shortlisted owners and their cats, whose stories are generally heartbreaking and uplifting at the same time, usually involving debilitating illness on the part of the humans, and sometimes the cats, too. You can watch all the films and meet the nominees here, but be prepared to get something in your eye. There is something counterintuitive about a huge gathering of cat people and no cats, but cat people know that cats don’t much like crowds, or being unecessarily coerced into cat carriers, or smelling other cats they don’t know. It would be counterintuitive to a cat welfare charity to puts cats into a stressful situation. I think it speaks of the general positive attitude and bottomless optimism that Cats Protection sends a film crew to the houses of cats and expects the cats to perform for the camera! What they mostly do is sit and look imperious, or hide. You cannot herd cats.

You can, however, herd cat owners. Here we are, four of the judges with the impossible task of choosing top cat (and by extension top cat owner), flanking winner 11-year-old Evie and her mum Tina. Evie is coping with bone cancer, and doing so thanks to Genie, pictured on the screen behind us. From left to right: ever-reliable master of ceremonies Alan Dedicoat – the National Lottery’s “voice of the balls” and longtime sideman of the late Terry Wogan – me, Evie, Tina, Anita Dobson, who needs no introduction, TV psychologist Jo Hemmings and fine actor Paul Copley, with whom I used to share an agent, and who is ubiquitous in top TV drama (Downton, Last Tango, Broken). Other celebs this year included the impressive Steven Dixon – co-host of Sunrise on Sky News, which I rarely miss – committed animal activist Peter Egan (Egan the Vegan!), Tim Vincent, Ali Bastion, Deborah Meaden (who, in a cruel twist of fate, couldn’t be there because her cat was poorly) and Anthony Head (another who couldn’t make it).

Here’s a fun pic of the judging lineup from last year, which, as you’ll see, contains a rock icon, and yes, he is a bit taller than me, although I am making myself smaller to match the height of Saffron from Republica. 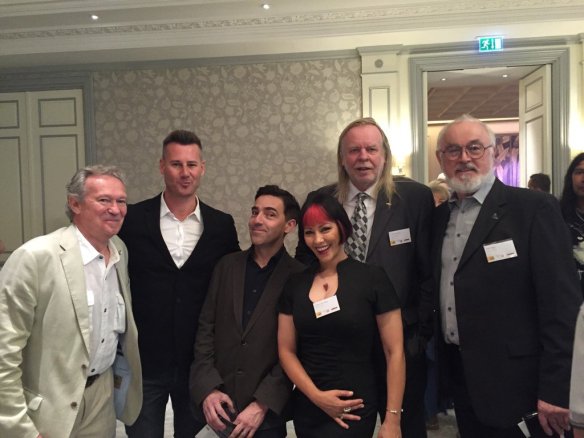 This is me trying to say something witty yesterday when we presented the final award. (We designated Anita as the one who would announce the winner and hand over the trophy as she is the most famous.)

A splendid time was had by all. The volunteers of Deeside Cats Protection were on my table, and when they won the Star Team Award for their selfless work rescuing 25 cats after Storm Frank hit the village of Ballater, their coordinator, Liz Robinson, was in bits. I couldn’t tell if she was embarrassed at seeing herself on the big screen, or just emotional because of the general mood of heightened empathy and cat-love in the ballroom and the tension every Oscar nominee must also experience before the envelope is opened. Anyway, she held up well once on the stage, as did all the winners.

I’ll be back next year, if they’ll have me. Here’s a cat.

On July 26, the documentary Blackfish is released in UK cinemas. It is one of the most heartbreaking films I have ever seen. It tells the tragic tale of one specific captive killer whale, Tilikum, a 22.5 ft (6.9m) long, 12,000 pound (5,400 kg) bull who lives – if you can call it living – at SeaWorld in Orlando, Florida, where he still performs for whooping audiences. His name comes from the Chinook word for “friends, relations, tribe, nation, common people”, which is ironic when you think for longer than a few seconds about the fact that whales in swimming pools are by definition separated from their extended families. (Tilikum was captured in 1983 off the coast of Iceland, aged around three years old, and has lived in swimming pools for most of his showbiz life. While held at Sealand in British Columbia, his first “home”, he and two other orcas were herded, every night, into a “holding” pool just 20 ft (6.1m) deep and 28 ft (8.5m) in diameter.)

Blackfish was made by documentarian Gabriela Cowperthwaite, who did not start out with an agenda. She had, in fact, taken her kids to SeaWorld and bought into the whole corporate myth that these beautiful cetateans are not “forced” to perform their tricks and do so willingly out of a love for their human trainers. (The word “killer” is usually dropped in the official commentaries at these shows.) Having done the same thing myself in 1994, no matter how conflicted I felt at the time about seeing two whales doing tricks for fish at what was then Marine World Africa USA in Vallejo, California, it has haunted me ever since and hardened my anti-zoo stance. I guess I am the choir to which the film could be accused of preaching to, although it’s hard to imagine why any right-thinking person would be happy about large, social marine mammals being kept in prison when they’ve committed no crime.

The orca is an apex predator, but has never attacked a human in the wild. Incidents of whales “turning on” their trainers, however, are more common than you might idly think. The engine that drove Gabriela to make her film was the awful death on February 24, 2010, of experienced trainer Dawn Brancheau at Orlando, which was witnessed, unknowingly, by a whooping audience. The precise cause of death is still murky, but Brancheau seems to have been pulled by Tilikum into the water by her ponytail, possibly in a moment of confusion over fish.

The whales performing on that occasion had been unresponsive and agitated, and only get fish after successfully effecting a trick, so they were especially hungry. Eyewitness accounts differ. Brancheau’s autopsy indicated “death by drowning” and “blunt force trauma”, and noted a severed spinal cord, and “sustained fractures” to her jawbone, ribs and a cervical vertebra.

SeaWorld was fined $75,000 by the Occupational Safety and Health Administration but insists that OSHA’s findings are “unfounded”. The implication, as ever in cases like this, is that human error led to the tragedy. This was the story instantly spun around the death at a Cumbrian safari park of zookeeper Sarah McClay, killed by a Sumatran tiger. The news media ensures that our first reaction to the story is never, “What is a tiger doing living in Cumbria?” 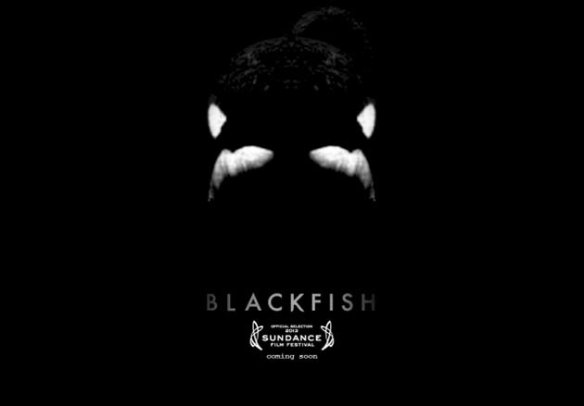 You will learn more about all this in the haunting film, which provides plentiful context: historical, behavioural, neurological (orcas have a section of brain that even clever old humans don’t have) and, yes, emotional. It may make you cry. I met Gabriela on Tuesday night at a private VIP screening of Blackfish laid on by distributor Dogwoof for representatives of various NGOs and activist groups (you might say a “captive audience” if the phrase wasn’t so inappropriate!) and she is a calm, logical, unhysterical advocate of basic commonsense in this area. Here she is. 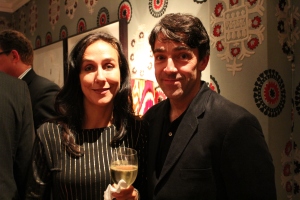 In her film, she speaks to a whole parade of ex-SeaWorld trainers, who confirm that incredible bond between animal and human, but who still question the motivation behind SeaWorld’s entire business model. The marine park chain currently has 22 killer whales in captivity, which remain big box office. For them, it’s all about money and turnstiles. And why wouldn’t it be? They’re a corporation. Blackfish is as much a critique of corporate America as it is of animal cruelty. (You won’t be surprised that SeaWorld refused to put up a representative to speak on camera, although transcripts of their defence at a previous court case speak volumes.)

I refrain from urging anyone to see a film. There may be issues closer to home than Orlando that come higher up your priority list. You may simply think: well it’s obviously wrong that massive whales are kept in a zoo, I don’t need to see a film about it to have my beliefs hardened. It’s not a snuff movie – you don’t actually see any trainers die, but you do see the bloody damage distressed whales do to each other when cooped up, and you do see some unprecedented “behaviours” which rather suggest psychological damage. Poor Tilikum seems mostly to be kept as a sperm bank these days. (He’s “sired” 21 offspring in his time, 11 of which are still alive.)

Artificial insemination is a common practice in animal husbandry, on farms, at stables, in zoos and elsewhere, and it’s done for reasons of conservation as well as commerce. However, you might find the sheer scale of doing it to a killer whale rather disturbing. Maybe that’s double standards, I don’t know, but I love killer whales. When I saw one in Vallejo in 1994 and sat right up against the glass of its viewing pool while it swam past my nose, I felt privileged to have seen it. And then sick that I had seen it in that unnatural setting.

I have a recurring dream which I’ve mentioned before, in which I am close to the edge of a pool in which huge killer whales are swimming. But it’s not a nightmare. I am terrified of falling in, and in awe of the whales, but I never do fall in, and they never harm me. No need to analyse that one, Freudians.

Oh, and I urge you to see Blackfish. Damn!