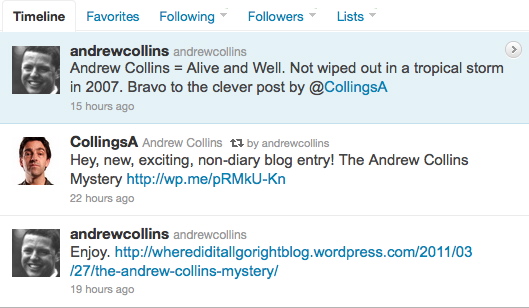 Further to the previous post, Detective Inspector Internet has now gathered us all in the drawing room to solve the Andrew Collins Mystery. After relating the facts of the case – the final Tweet, Hurricane Noel, the MIT Sloan connection, the CEO of RentJuice – you collectively set to work. Andy McH found what looked to be an Andrew Collins in Facebook with links to MIT and sent him a message. He also found the same guy on LinkedIn here. The good news was: Andrew Collins, who doesn’t live in Miami, but was in Miami on November 2, 2007, didn’t perish in the tropical storm. He is alive and well and just not Tweeting. As you can see from the grab above, he enjoyed being the centre of a mystery, and broke his no-Tweeting rule for the first time in three years to send out a message to us all. Bravo to him!

Good work also by Jonathan and Jeanette in the comments section of this blog, where we also heard, triumphantly, from his sisters, Cathy O’Flaherty and Brigid Collins (who described Andrew as “my cool younger brother”).

I am delighted that we have found him. He is now officially the Andrew Collins. I wonder if he’ll let me have his name?

OK, here’s how it all started. On Thursday, irascible comedian and father Robin Ince pretended to berate me via the medium of social networking site Twitter. I’m going to assume you know how Twitter works. He included my @name in his Tweet, except, distracted fool that he is, he typed in @andrewcollins. My Twittername is @CollingsA, and has been since 2008 when I first signed up.

Inevitably, if you have a common name, as I do, you won’t get your actual name, as it will already have been taken. This proved to be the case with mine, and that’s why I ended up going down the “Collings” route. This means I have to spell it every time I say it, and it also means I am doomed for the rest of my days to be known by a name that is not actually my name. Anyway, people are often mistyping it as @CollinsA, which is the name of Amanda Collins in Halifax, Novia Scotia, who’s probably fed up with getting stupid Tweets to her that she doesn’t understand. This happens. It is @CollingsA.

Anyway, out of curiosity, I looked up @andrewcollins, clearly jealous of him for being such an early adopter of Twitter he was able to have his own name in full. Well, here he is.

Now, ordinarily, this would be a bit of fun: find a namesake, discover that they are an alumnus of Massachusetts Institute of Technology and see how different they are from you. But Andrew Collins, who seems to be based in Miami, hasn’t Tweeted since November 2007. Indeed, he has only ever Tweeted seven times in total, between October 21 and November 2 of that year. Did he get bored with it in under a fortnight? Clearly, my first, selfish thought was: surely I can have his name if he’s not bothered about Twitter any more. But then I read his last Tweet again and things went a bit eerie:

Did he perish in the tropical storm – officially, Hurricane Noel – which moved in from Haiti and Cuba to the Florida coast in November 2007 and up the Eastern seaboard as far as Canada? It’s a horrible and sad thought. But you wouldn’t be human if you didn’t wonder. Who was Andrew Collins of Miami? From his other Tweets we discover that he was a Red Sox fan. He only followed three other “people”, all connected with MIT and its Sloan School. (Hey, back in 2007, there were far less people to follow. If he did get bored with Twitter, who can blame him?)

I looked up Hurricane Noel, and it claimed the lives of 222 people, the majority of whom were in the Dominican Republic and Haiti, and none of whom were in Florida, or the United States. This seems to confirm that Andrew Collins wasn’t killed in the storm. But where did he go?

I suspect that, as an early adopter of Twitter, he didn’t find much use for it. He only followed three people, after all. Twitter’s “tipping point” is always said to have occurred in 2007. (It went from around 400,000 Tweets per quarter in 2007 to 100 million in the first quarter of 2008, by which time, Andrew Collins had tuned out.)

I sent a message to one of his 22 existing followers called David Vivero, the first one I came to who seems to still use the site. He’s the CEO of RentJuice. But he hasn’t responded. Mind you, my Tweet to him must have sounded weird, or a bit like spam. I hold out little hope of him replying.

If I was a proper journalist, or someone looking to write a book, I’d take it further, but I thought I’d share it here anyway. Who is Andrew Collins? And why did he stop Tweeting in November 2007?

I Googled him and “MIT alumni” and found an Andrew S Collins listed in an MIT Sloan Management annual report from 2007 but he’s just listed, and it might not be our Andrew Collins, and anyway all it would prove is that he was alive in 2007, which we already know.

Perhaps I should ask all 22 of his followers if they know where he went. Maybe I will.