Whatever | 3D or not 3D
Will Avatar take Hollywood to the next dimension, or are those glasses making us blind? 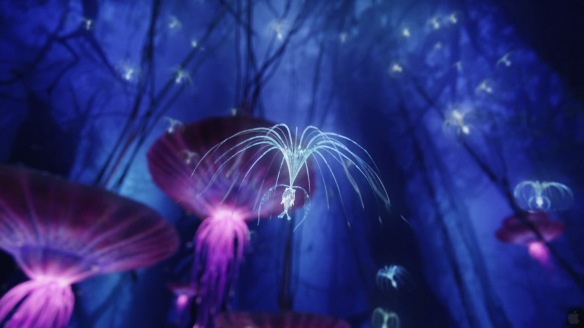 Just before Christmas in 1952, United Artists released a functional African jungle adventure called Bwana Devil. The first feature to be exhibited in Natural Vision 3D, its publicity made the famous promise, “A lion in your lap!” Advertising standards would take a dim view of the flimsiness of this leonine proximity claim today, but desperate times – as the 1950s were for Hollywood during TV’s first boom – called for desperate measures.

Just before Christmas in 2009, 20th Century Fox released a functional Pandoran jungle adventure called Avatar. The first feature to be shot in 3D using various bespoke gizmos in the field of motion-capture, its publicity revolved around special tie-in bottles of Coke Zero and director James Cameron talking the film up big-style at sci-fi conventions. No explicit promises were made, but Avatar might have been sold with the guarantee, “Little floaty specs of ash caused by an air strike raining down around your shoulders like dandruff!”

This is not meant as a facetious comparison, even though I have carefully written it as one. In actual fact, not that much has changed between the lion in the lap and the dandruff down the back, except that 21st century audiences are less gullible and more reticent to tear themselves away from small glowing boxes. Bwana Devil did well enough at the box office, as did the knock-on 3D flea circuses that propagated in its wake – House Of Wax, It Came From Outer Space, Robot Monster, The Creature From The Black Lagoon – at least until the sums stopped adding up. But none of them performed like Avatar, even if figures are adjusted for inflation, which they never are or else Gone With The Wind would always be number one and the all-time box office charts would cease to act as a team-building exercise for studio accountants.

The tin-hat difference between Bwana Devil and Avatar is that the former was conspicuous by its absence at the 25th Academy Awards – it was all 2D confections like High Noon and The Quiet Man that year – while the latter scored nine nominations at the 82nd. By the time you read this, you’ll know whether or not it took home Best Picture. If not, having already shamed his last film Titanic into second place with a world-beating $2.3 billion take (at time of going to press), Cameron will be able to dry his eyes on hundred dollar bills and toss them into a waste paper basket woven from the eyelashes of angels.

The twinkling aura of success that fizzes and pops around Avatar provides a welcome firework display to momentarily distract from an inconvenient truth: that the movies are in trouble. In posh film journal Sight & Sound, Nick James made his own prediction: that the Oscar will indeed go to Avatar, because, as he foresaw it, “this year the industry will vote for the financial, not the aesthetic Best Picture … The business will cheer the money, because they’re scared and they hope that 3D can save them.” In the same issue, Nick Roddick, writing as “Mr Busy”, penned a de facto obituary for Hollywood as we know it: “the studio system is like a dinosaur in a tar pit.” With execs being fired on a daily basis – two of them, Universal co-chairmen Marc Schmuger and David Linde announced that we live in “an era where brands have become the new stars” just before they received their redundancy packages – the impression is of an industry in panic. Why? Didn’t some film called Avatar just make, like, more money than any other film ever except Gone With The Wind and who cares about that old thing? Yes it did. In 17 days. (Now there’s a block graph on an overhead projector that’s going to make up for the lack of croissants at the News Corps shareholders meeting.)

Just as the success of Nirvana led to the signing of Tad, post-Avatar, film studios are literally sending completed blockbusters back to the menders and ordering up an extra dimension, from Clash Of The Titans to the final Harry Potter double-bill Deathly Hallows. The Times reported that LA’s celluloid-to-digital conversion labs are fully booked (“We can turn an older film into 3-D in around 16 weeks,” said the man at one such, Legend Films in San Diego), while super-geeks Peter Jackson and George Lucas are salivating at the prospect of running their respective sagas through the machine, just as Pixar have done with Toy Story. “2D or not 2D?” – that is not the question.

I wish it was a passing craze, like Sensurround™, Illusion-O™ and Vinnie Jones™, but with 3D tellys being rolled out, 3D Blu-Ray on the horizon and 3D football matches bringing new meaning to collecting up the glasses in pubs, it may be that the man from cinema chain USC was right when he told the Times, “It’s no longer a gimmick, but an expectation.” Not in my house. And I speak as someone who queued up to see Friday The 13th 3D as a teenager in order to experience a pitchfork handle in my face. Nick James is astute when he describes Avatar as “a film for 15-year-olds that grown-ups enjoy for its technological breakthroughs.” I also worry that all this tech-fetishism makes gawping idiots of us all.

Hey, I’m all for the industry being saved – I really like films – but Avatar is not exactly a quick fix. It took years to make and cost $310 million, plus $150 to market. It would be cheaper to release an actual lion into every punter’s lap.

Having said that, those wraparound 3D specs did create the dazzling illusion that Cameron’s one-dimensional characters were two-dimensional.