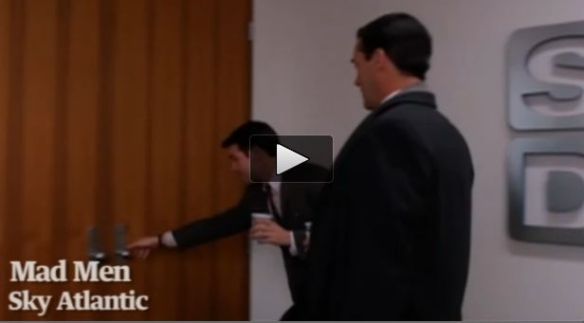 A mere 58,000 viewers tuned in to Sky Atlantic overnight on Wednesday to watch the majestic return of Mad Men, which is down even from the channel’s 98,000 for the start of Season Five last year. It really is one of the least-watched pieces of genius on TV, and it’s the lead review on this week’s Telly Addict, so the Murdoch-intolerant and/or surcharge-averse will at least get to see some majestic clips from its December 1967 incarnation. I also check back in with Game Of Thrones on the same channel (which gets more like 710,000 viewers, by comparison); welcome the first full series of Morse prequel Endeavour to ITV; warm to Victoria Wood’s Nice Cup Of Tea on BBC1; mark the upward turning point of Season 2 of Parks & Rec on BBC4; and applaud Mark Gatiss’s latest period Doctor Who on BBC1.