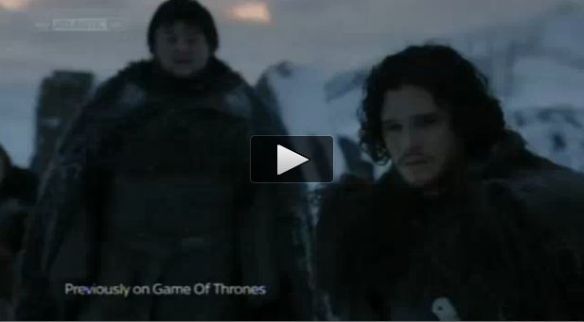 Since Game Of Thrones – or GoT as all the uncool kids are calling it – is the most talked-about TV show of the moment, with catch-up guides in every newspaper for those losers who haven’t been watching it from the start (we’re at Season Three for heaven’s sake – do you really have to wait for the broadsheets’ permission?), I have to confess that I’m not reviewing Game Of Thrones on this week’s Telly Addict, because, when I wrote and filmed it yesterday afternoon, the first episode hadn’t aired. (I review, not preview, as previously established.) But we do have the jolly return of Doctor Who on BBC1; Paul Hollywood’s Beard/Bread on BBC2; the latest sci-fi saga from the JJ Abrams universe, Revolution on Sky 1; an update on Broadchurch on ITV; a warm welcome for the regeneration of Foyle’s War on ITV; and a sneak preview of The Village on BBC1.

I have now, of course, watched the first episode of GoT, and it really is not for the latecomer. That’s all I’ll say. Full review next week.