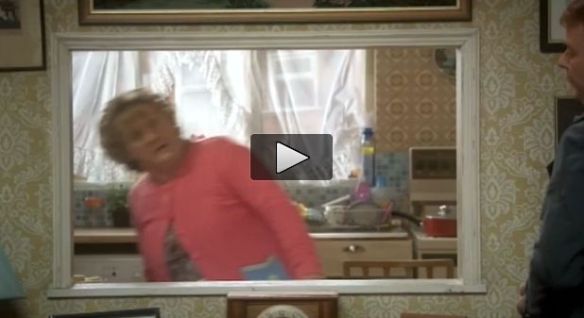 Last week’s Telly Addict broke box office records at the Guardian website – I believe I am right in saying that it was the most viewed of all my little, ten-minute TV reviews since April 2011. This week’s Telly Addict can only take a concomitant ratings dive, as it contains no full review of Mrs Brown’s Boys. I fully intended to assess the final episode of series three – the one with the gay wedding – on BBC1, but BBC1 forgot that it’s the most successful comedy on television and bumped the Saturday night repeat for the rugby, failing to find another home for it on any of its other BBC channels. (Let us not forget that the repeat was pulling four million viewers. Who needs ’em, eh?) Instead – apart from a couple of spare clips from last week’s Mrs Brown’s Boys – it’s all about Dancing On The Edge, Stephen Poliakoff’s latest glacial masterpiece, on BBC2; Stewart Lee’s Alternative Comedy Experience vehicle on Comedy Central; Danny Baker’s magnificent Great Album Showdown on BBC4; and a little nod to what might be the final mystery for Lewis on ITV. Perhaps I should have reviewed the rugby. (Oh, by the way, I shall be passing judgement on Louie, belatedly, and Nashville, next week.)