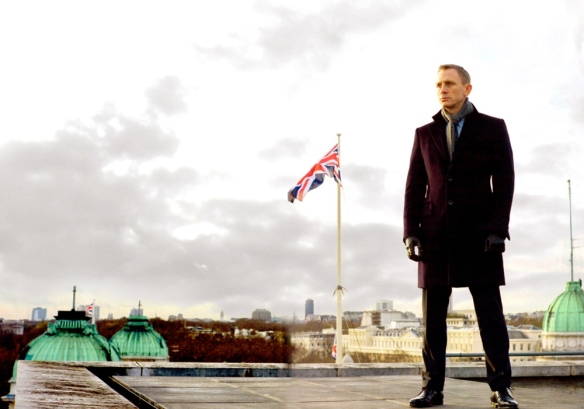 I’ve just spent the morning discussing James Bond down an ISDN line with a rainbow coalition of a dozen local BBC radio stations, and from Glasgow to Kent, via Derby, Herefordshire, Northampton and Stoke, it proved an effortless talking point. Everybody has an opinion on, and an interest in, James Bond movies. For a franchise that’s half a century old, it never gets old. And Skyfall, the 23rd Bond movie, and the one that marks its 50th birthday, which opens today, at least justifies our continued loyalty to the ancient spy of the old school. It’s a great Bond movie. This opinion seems not to be a maverick one either; it’s getting four and five stars everywhere, presumably to compensate for the lukewarm reception we all gave The Quantum of Solace, whose villain was so unmemorable, nobody can remember him. (Well, I can, but it’s my job to.) Whether Skyfall is a four or a five star film seems to be the extent of the debate. I guess its now fabled “backstory” might not be to all tastes – after all, surely the Bond we have loved since 1962 abides because we don’t care about his past, and as such, he doesn’t have one – but for me, it lifted the film, and took it in a new direction.

I’m not about to spoil it for you, as other reviewers have. The trailer hints at various things – a line of coffins draped in Union flags, Bond telling M that he’s beeen “enjoying death”, a helicopter rising above what looks like a Scottish highland landscape, a bit with Chinese lanterns, a glimpse of Javier Bardem’s distinctly camp, bleach-blonde villain calling the British Empire “a ruin” – but the fun is in seeing how these things join together. If you’re not excited by the shot of Daniel Craig landing in a train carriage while the back of it appears to be ripped off, and suavely adjusting his cuffs, you mustn’t waste your money by going to see it.

It feels big. Although, with a sizeable budget of $150m, it’s not actually the most expensive. (That would be the last one, which came in at a reported $200m; the previous Brosnans came in well under $150m, with his first, GoldenEye, costing a paltry $58m; and they were knocking the Roger Moores out for around $30m.) It’s long. Although, again, no longer than Casino Royale, at 144 minutes. (If you check the numbers, most Bond movies clock in at two hours or thereabouts, with classics Dr No and Goldfinger around a lean 110 minutes apiece. I believe I’m right in saying that Thunderball, Bond 4, was the first to indulgently break the two-hour barrier.)

The burden of any successful franchise is comparison. We all have our favourite period, and favourite Bond, and it is ultimately fruitless to compare, say, You Only Live Twice, my all-time favourite, with Skyfall. They occupy the same basic milieu of international espionage, in the service of Queen and country, but the focus of global villainy moves around, and the methods by which world domination might be achieved shift according to developments in politics and other factors; diamonds become oil, the oceans become space, and so on.

Here’s an area in which I think Skyfall can safely claim the crown: ticket thickness. The invites to the first ever UK preview screening of Skyfall, which took place two Fridays ago, were the thickest I’ve ever taken receipt of. I mean, look at them. 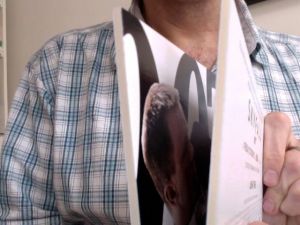 If they had been bread, you could have made a decent sandwich with them. And in one sense, they were bread, as Bond is all about money. The Marvel franchises that typify the mainstream output of Hollywood are all about money, too. It’s not a headline. Nor is the fact that Bond is a hub of product placement. I sort of feel sorry for director Sam Mendes, an artistic soul with his roots in the theatre, as he’s had to bat back questions about product placement, particularly the bit where Bond drinks a bottle of Heineken. (I’ve never had him down as a beer man.) Mendes, ruffled, says, well, if he wasn’t drinking Heineken he’d be drinking another brand of beer. That may be true, but it’s not an answer to the charge that the tail of commercial synergy is wagging the dog of artistic vision.

I wrote about the frankly ludicrous and distracting extent of commercial tie-ins to Quantum Of Solace on this very blog. You can read it here. But it’s not new. According to one of the nice local radio interviewers I spoke to this morning, there’s a scene in Moonraker that’s clearly designed to foreground the 7-Up logo; I have no reason to disbelieve him. The Aston Martin DB5 is a product that’s been placed – it even had a Dinky toy. So was the Lotus Esprit. We owned that Dinky toy! So, in a way, was the Millennium Dome in the pre-credits sequence to The World Is Not Enough. Frankly, if a bottle of Heineken offends you, don’t drink international beer brands in pubs and bars.

I was offended, ideologically, by the constant branding by media partners at the Olympics, but at the end of the day, if the sporting achievement is good, it’s just about possible to ignore the sponsors. Same with James Bond. A franchise that has, over its 50 years, promoted a false colonial vision of British dominance and decency, and sidelined women into decorative and expendable garnish, has plenty to answer for. But it has also adapted to survive, presenting a Murdoch-like media baron in Tomorrow Never Dies as a global baddie 15 years before the Leveson Inquiry, for instance, and pulling back on the indiscriminate sex in the wake of Aids.

I love the old Bond movies, the 60s ones, with Sean Connery, who remains the best Bond – even when, in You Only Live Twice, he’s doing it under duress – but I had a lot of time for Brosnan, and even more for Craig. Skyfall is a bold attempt to update the palette, giving loads more for an old lady, Judi Dench to do, while regenerating Q as the young Ben Whishaw, who gets all the best gags. The “Bond girls” are his ass-kicking equals, especially Naomie Harris, who keeps her kit on; while the theme tune harks back to the glory days of Bassey and Sinatra. I feel it gets the balance right. And if ever a Bond was going to be sentimental, it was the 50th anniversary one, but aside from the “backstory” element, it’s not. It’s pretty hard, and unyielding. Bardem’s villain is a horrible, psychotic bastard, and – this is in the trailer – when he blows up the MI5 building, you really feel a sense of terrorism about him, rather than just the megalomania of a rich man with a big train set. The London setting chimes with the Olympics and the Jubilee in 2012, but there’s less to celebrate, and there are no cheering crowds.

With Spooks gone, and its Cameron’s-Britain replacement, Hunted, all mercenary and private-sector, we might need the fictional civil servant James Bond more than ever.

15 thoughts on “Spooksperson for a generation”