Behold, the Collins family kids, in a row, holding their favourite present on Christmas Day, 1975. From left to right: Andrew, aged 10, holding Denis Gifford’s Pictorial History of Horror Movies, a large hardback book whose wraparound glossy dust jacket has long gone, but whose vivid painterly back-cover collage of images is captured in all its glory; Melissa, aged 5, wearing her nurse’s uniform; and Simon, aged 8, who seems already to have constructed an anti-tank gun from a khaki Meccano set. We didn’t want for much.

The reason I’m printing this seemingly random happy snap from the long-ago past is that I met and interviewed the extraordinary Mark Gatiss for Radio Times this week. It all happened very fast: BBC4 offered him up for interview on Monday, to promote Horror Europa, his personal, 90-minute documentary about European horror cinema – showing on the night before Halloween, and a direct follow-up to his well-received A History of Horror from 2010 – I arranged to meet him on Tuesday, over pasta during an hour’s break from “tech rehearsals” at the Hampstead Theatre for 55 Days by Howard Brenton, in which he plays Charles I to Douglas Henshall’s Oliver Cromwell (and which opened for previews on Thursday); I transcribed and wrote it up at 900 words on Wednesday; and the two-page layout was signed off yesterday.

The above still is from A History of Horror, when Mark was bearded. Although he is bearded as King Charles, it is a stick-on beard, and he was clean shaven over dinner. This was a labour of love for me – I jumped at the chance, even though I’m way too busy to write 900 words – which is apt, as these documentaries are a labour of love for him. He’s 46 – in fact, he turned 46 on Wednesday, so he was 45 when I dined with him – and we share the same boyhood obsession with horror movies, something that informed our discussion over calamari and chips (me) and salmon and spaghetti (he). In A History, he explicitly revealed how important the Gifford book was to him, and whether he likes it or not, I bonded with him forever.

I loved this book. To say it was my Bible sounds sacrilegious, but then, it was filled with evil and supernatural images. First published by Hamlyn in 1973, it was still a relatively new book when I got it for Christmas in 1975, and I’d had it in my sights for ages, thumbing through it in WHSmith’s in the Grosvenor Centre of a Saturday morning shopping trip. Its unofficial companion in my house – and, it transpires, in the Gatiss house in Country Durham – was Alan G Frank’s Horror Movies, published in hardback by Octopus in 1974 under the Movie Treasury imprint and subtitled Tales of Terror in the Cinema. (I had to wait until Christmas 1978 to own this.)

A copy, in its original dust jacket, appears on top of a prop telly in Horror Europa. Another touchstone. Of course, it would be easy to be jealous of Mark Gatiss, who gets to turn his childhood horror nerd obsession into television programmes – to exorcise it, if you like – but these programmes are so good, he fronts them with such urbane charm and enthusiasm, and he’s so true to his roots, we should all be grateful that he’s seemingly in charge of horror at the BBC.

There’s something glorious about finding common ground with people of your own age. You may remember that I was able to find an instant bond with JJ Abrams when I interviewed him about his film Super 8 last year. He, too, is 46. It’s no surprise to discover that he was a fanboy, as we weren’t called in the 1970s, but I was still over the moon to see the film’s chief protagonist Joe carefully painting an Aurora glow-in-the-dark model of the Hunchback of Notre Dame in an establishing scene (the film is set in 1979). Here’s my grab: 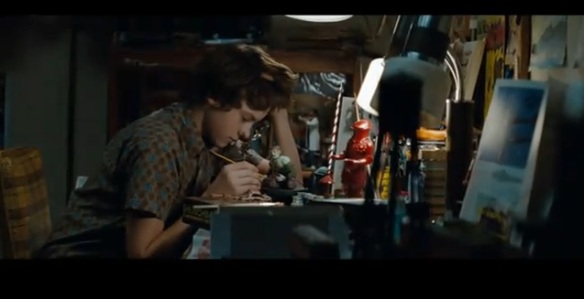 I was so mad about these kit models. I think I had them all, at various stages – the Hunchback, Phantom of the Opera, Godzilla, King Kong, the Wolfman, the Creature from the Black Lagoon, the Salem Witch, Frankenstein’s monster, Dracula, Dr Jekyll, the Mummy, the Forgotten Prisoner of Castel-Mare – as my Airfix-inclined friends and I would swap the finished items, and usually repaint them in new Humbrol colours to claim them as our own. At this age – and I got my first, the Hunchback, and my second, Dr Jekyll, for my ninth birthday in 1974 – I was utterly preoccupied with horror, especially the iconic monsters that Universal defined itself with in the 1930s, not that I really had any concept of the 1930s at that wide-eyed age.

Ironically, when The Hunchback of Notre Dame, the 1939 classic starring Charles Laughton, was on television in June 1974, Simon and I were too scared to watch it! When BBC2 starting running their double-bills on a Saturday night around that time, we dared each other to watch what would be ultra-tame, fag-end stuff like House of Frankenstein, and The Mummy’s Ghost on the black-and-white portable, after dark. We weren’t the first boys to find something thrilling in being scared out of our wits, and I’m glad we had no prejudice about whether a horror film was old or new, cool or uncool, black-and-white or colour.

One of the many things Mark Gatiss and I agreed upon on Tuesday was that it was the very unattainability and the mystery of the stills in our horror books that made them so alluring. What would The Student Of Prague or The Golem or The Cabinet of Dr Caligari actually be like to watch, moving about? I choose three silents because neither did we have any prejudice about silent movies at that age. How innocent and free from preconception we were!

So, this has been a hymn to childhood, or at least childhood in the pre-video age, when horror nerds had access to almost nothing but stills in books, plastic models and our imaginations to fire up our enthusiasm.

Horror Europa is on BBC4 on Tuesday 30 October at 9pm. My interview with Mark appears in next week’s Radio Times, out on Tuesday. And while we’re plugging, to go all BBC announcer for a moment, Mark Gatiss is currently appearing in 55 Days at the Hampstead Theatre … (nobody has asked me to do that link, which is why I’m happy doing it)

PS: My sister didn’t become a nurse; my brother did join the Army; I took my Pictorial History of Horror book to an Italian restaurant in Swiss Cottage when I was 47 to show it to a man, who whooped, “the green one!”

1 thought on “The horror”