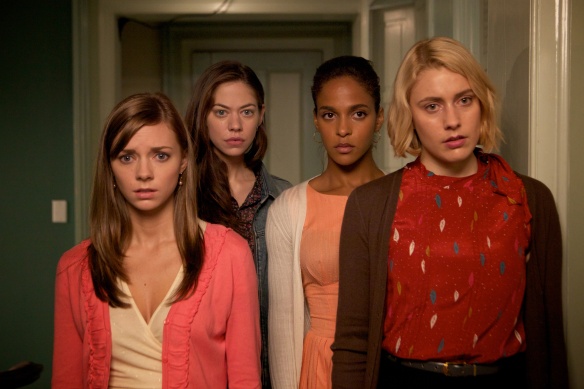 By accident and not design, I saw two films at the cinema over the weekend that were about women. The first, Damsels In Distress, written and directed by a man, portrayed men in a very bad light; largely as thick-headed, arrogant dimwits or shysters. The second, Elles, written and directed by a woman, also portrayed men in a bad light; as desperate, shallow sad cases, sometimes cruel with it.

The first, and more successful, was Damsels In Distress. American indie auteur Whit Stillman takes his time. He’s only made four films since 1990. The first two, which I haven’t seen, were linked by low budgets, no stars, lavish praise and a concern for the urban haute bourgeoisie, Metropolitan and Barcelona. I’d like to see them. I saw The Last Days Of Disco in 1998, the third part of a loose trilogy apparently, because I was tempted by the subject matter, and I remember really enjoying it. It also revolved around two women.

Disco was set in the early 80s. Damsels is set now. Or, at least, I think it is; there are few clues that time has passed much since the 1950s, and because it’s set in a minor, fictional Ivy League college where the puzzling culture of fraternity houses still holds primitive sway, it all seems very remote and old-fashioned. That is, I’m sure, the point. (There is a subplot about the frat houses being closed down.) When I saw National Lampoon’s Animal House in 1979, aged 14 – it was my first “AA” – this was my first exposure to the arcane college system of the United States, and I wasn’t worldly enough to spot that it was set in the early 60s. I realise that now, just as I realise that Happy Days was set in the 1950s, which I didn’t at the time. America seemed so foreign when I was a kid, I assumed it was still all about milk bars and the hop. Which, of course, to an extent, it still was in the 70s, and to a lesser extent, still is today.

Greta Gerwig is the only recognisable face. As Violet, she leads a group of prissy girls whose stated mission is to “save” dimwitted boys by going out with them and seeking to improve them. It’s a bizarre almost sexless set-up, but Stillman plays it so straight, it’s hard not to be drawn into this parallel universe. Nobody speaks as people speak; they are all dazzlingly eloquent and self-aware, and you will either find this a delight, or a massive irritant. I fell almost immediately into the former camp. If someone told me they couldn’t even sit through it, I would empathise.

It’s a 12A. There’s nothing in Damsels to frighten the horses. One subplot hints that a boy – duplicitous and untrustworthy, naturally – elicits anal sex with one of the prissy girls by claiming it’s a religious necessity for him, but this is as close to adult the film gets. It’s sort of the anti-Heathers. Gerwig’s troupe, who run a suicide prevention centre and offer tap-dancing as a therapy, seem brittle, remote and untouchable at first, but reveal deeper human feelings as the story progresses, even depression, all of which are whipped back into a fluff by an ending that comes as something of a shock, albeit a feelgood one.

It’s rare you see a film that reminds you of little else. Damsels is one such. (I gather it reminds people who’ve seen them of, yes, Metropolitan and Barcelona, the first of which was also concerned with an Ivy League college; Stillman went to Harvard.) It’s clever, wordy and weird, and if it puts women on too high a pedestal – and casts men into such a corresponding trench – well then, hooray for Whit Stillman. Better his breathless praise for the opposite sex, than Polish director Małgorzata Szumowska’s apparent disdain for her own, as we are about to see.

I’d read some lukewarm and hostile reviews of Szumowska’s French-language reverse-porn film Elles before seeing it, and such reviews are rare for anything with Saint Juliette de Binoche in. She plays an almost totally implausible journalist for Elle magazine, the kind who sits at home in her gorgeous Paris apartment staring at a computer and fielding calls about word-length from an unseen editor. (It may have been sloppy subtitling, but at one stage, she and the editor haggle over 8,000 “characters”, which must surely have meant words?) She interviews two female students who work as prostitutes to supplement their fees, and in doing so, unlocks her own inner prostitute. Not literally, of course, but that seems to be the thrust of the story.

It’s tosh. The studes, one French, Charlotte, one Polish, Alicja (hey, the director is Polish and she’s making her first French film, who can blame her?), seem not just guilt-free about servicing “bored husbands” for Euros, but empowered by it. They are certainly no damsels in distress. I may have missed a few meetings since becoming a feminist in the 80s, but the empowerment of women through submission to male needs and fantasies has always been a thorny one for me to grasp; clearly, women should enjoy nothing less than equality in all areas of life, from work to sex, but I’m not modern enough to see how pole dancing fits into this.

Anyway, Elles (rotten title) revolves around Binoche’s superwoman preparing a slow-cook casserole for her blasé husband’s boss, juggling the kids (including a particularly nightmarish teenage dopehead son), going food shopping and trying to fix the fridge door, while also attempting to finish her article, which chiefly involves listening to interview tapes that provide us with flashbacks mostly of the two students having frank sex with various men. Their clients run the clichéd gamut: from the businessman who bursts into tears after a premature ejaculation, to the shark in the hotel room who turns out to be a disgusting sadist (a rare instance of momentary distress there, but not enough for Charlotte to consider putting a stop to her extracurricular revenue stream). The only character who seems new is the middle-aged bloke who serenades his prostitute, naked, on an acoustic guitar. Was this odd moment of comedy supposed to show that not all men who pay women for sex are bad? That rather lets them off the hook, doesn’t it?

Although the sex is not titillating – or at least, not titillating unless you are titillated by seeing bored young women service older men – there is a lot of it, and I’m not sure it added much to the already fairly thin thesis. In the end, I found Elles infuriating, which wasn’t helped by the couple sitting next to me who had sought out the Noisiest Snack Available in the foyer and kept talking until I politely asked them not to.

I didn’t buy it. Binoche is literally never bad; and she gave the part her all – an “all” it didn’t really merit – imbuing a cardboard cut-out with life and radiance. But her grown-up journalist seemed to find the whole subculture of prostitution so shocking, you started to wonder if she’d ever read a newspaper article in her life. The scene where she gets drunk with the Polish student and they indulge in a sort of semi-erotic, quasi-Oedipal display of dancing to a terrible electro track is particularly embarrassing, and if it had been conceived by a male writer/director, you could have put it down to sleazy voyeurism. But it wasn’t.

Perhaps Elles is simply intended to be a protest about student fees. But a film about bar work isn’t really going to get the punters in, is it?