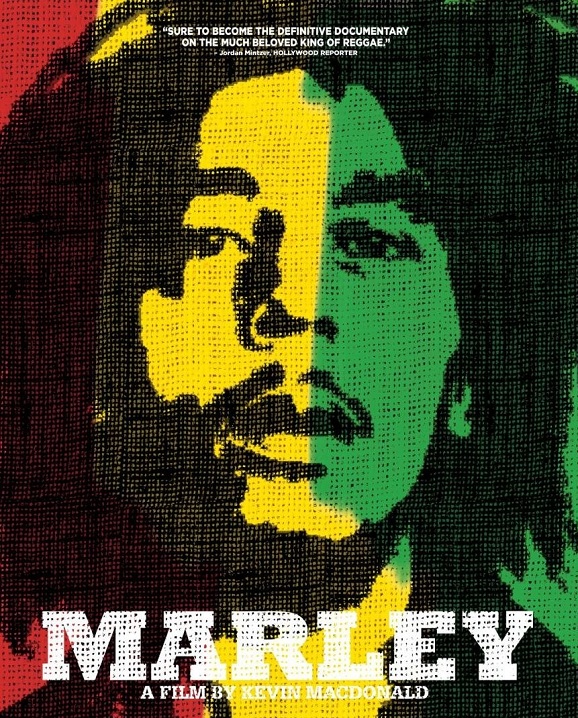 In an effort to be the most clichéd white person in the country, I am listening to Bob Marley on Spotify as I type, inspired to do so by having seen Kevin Macdonald’s splendid two-and-half hour documentary Marley. I’m glad I saw it at the cinema on a Saturday afternoon, not just because it put a massive smile on my face, but because there’s still something thrilling about watching footage you expect to see on TV on the big screen, such as the all-too-scant concert footage of Marley that snakes vitally through the film, a film that is otherwise dominated by interviews and actuality from modern-day Jamaica, where most of his compatriots and offspring still reside.

I’ve been seeing the trailer for Marley for weeks at the Curzon – again, I can almost recite it – but unlike similarly overplayed ads for The Kid With A Bike, Blackthorn and Le Havre, there’s not much you can ruin about a hagiographical lifestory. After all, we know Bob dies at the end. (Having glibly said that, the details of his final months were incredibly moving and sad, especially when, at a snowbound Bavarian holistic clinic, his dreadlocks fell out and we heard from his daughter Cedella the shock she felt when she saw him, looking small for the first time in his life: the lion without his health-giving mane. Incidentally, the cancer had riddled his body by the time he went to Germany for a treatment based on nutrition, but I couldn’t help thinking: this is not a man who should be somewhere cold and snowy in his last days. He eventually died in Miami.)

When a figure from music is so big, so widely hailed, so iconic, and his music has been so comprehensively absorbed not just into the mainstream but into the fabric of our lives, it’s easy to take him for granted, but Marley re-establishes Bob Marley as the true one-off he surely was, raised as a “half-caste” in dirt-poor Jamaica, driven by music from an early age, immersed not just in the local music – Mento, ska, then reggae – but in the particular religion of his island community, and yet, accepted and loved by every creed and colour around the globe.

Although this is very much sanctioned by his estate, and co-produced, seemingly, by most of the people interviewed for it, Bob is not entirely sanctified. He was, to use Mark Ellen’s phrase, a “tremendous crumpeteer”, and left behind 11 kids and no will. That said, he did seem to genuinely believe in a higher power than money, something that laid him open to all sorts of opportunism. I felt that Chris Blackwell – another co-producer – was given short shrift, with barely a mention for the important part Island Records played in bringing Marley, and thus reggae, to a wider (for which read: whiter) audience. At one stage, the voice of Peter Tosh is heard, referring to Blackwell as “Whitewell.”

My knowledge and appreciation of reggae used to be fairly vanilla, but when my first 6 Music show was produced by the MOBO-lovin’ Frank Wilson, my understanding of reggae’s roots in ska and rocksteady, and before that imported American R&B, was deepened. I also interviewed the writer David Katz, whose 2004 oral history Solid Foundation is a great, well, foundation, and photographer David Corio, another white man captivated by Jamaican culture. I was also lucky enough to meet Rita Marley, whose book No Woman No Cry gives an honest, up-close account of Bob’s antics. All of this matured my view, and I took away a love for early reggae in preference to the big stuff Marley was shaking the world with in the 70s. (I prefer to hear The Wailing Wailers – Judge Not, Simmer down – featured in the film, and have a soft spot for tinny late-60s stuff like The Paragons, The Pioneers, The Upsetters, Desmond Dekker.)

So, go and see the film. Witnesses like Bunny Wailer, Neville Garrick, Junior Marvin, Ziggy, Carlton Fraser, Aston Barrett, Allan Skill Cole are so charismatic, you just love being in their company as the story unfolds. It’s astonishing how little moving footage there seems to be of Bob, in concert or otherwise, and many of the big moments are captured only in stills. But whole episodes of his life were unknown to me, particularly the concert in Zimbabwe with the tear gas; and the massive shows in America where very few black people turned out, leading to the support slot with the Commodores – something Marley was honest and humble enough to do – where at last he and the Wailers see black faces in the crowd. Segregation may have been officially banished in the US, and in the former Rhodesia, but still dividing lines were drawn.

I’m not sure to what extent Marley is Macdonald’s film, as he seems to have taken up the reins after previous director Jonathan Demme fell out with one of the producers, but it sounds like a soft Scottish accent asking many of the questions off-camera, so I’m hoping it’s him. The skill in putting one of these things together is partly to “animate” stories where only testimony and still photographs exist, but partly to link the present with the past. With a subject whose legacy seems set to loom in perpetuity, at least there’s no danger you’ll end up on a nostalgia cruise.

Just as watching French and Italian films always makes me want to drink wine, watching Marley might have you reaching for the cigarette papers. Not in the cinema, though, please.

For the record and full disclosure (I am nothing if not scrupulous in these matters), this blog post, hardly an inflammatory or controversial one, originally contained a  joke which I removed last night once it had come to intention via Twitter that it had been taken at face value. Mea culpa: it was obviously a bad joke, badly made, and I immediately edited it, as it had no bearing whatsoever on the sentiment of the review. It was a daft reference in the bit about Bob’s failed holistic treatment to Ben Goldacre and Robin Ince that was certainly never intended to offend. If anything it was a joke about our famous differences of opinion, as much a joke on me as them. After all, Robin is my friend, and I have met and worked with Ben on a number of occasions, thanks to Robin, and it has always been civil and even jokey. Anyway, I think some of the latter’s followers on Twitter must have linked to the site, as for a fairly unremarkable review of a film, it’s had an unusual amount of visits. If you posted a comment questioning the joke and your comment hasn’t appeared, it’s because I removed the joke. Apologies for any confusion, although not to anyone who tried to turn it into a fight. (I do not have a smart phone, and am “off Twitter” and “off blog” for hours at a time, especially at weekends, so I am sometimes slower to respond to these things than other people.)