Here is a poster for Jack Goes Boating. It’s the directorial debut of Philip Seymour Hoffman. He’s also in it. He was in the off-Broadway stage play it’s adapted from, and he directed that, too. The film is kinda off-Broadway. It is proud to say that it comes from “the producers of Little Miss Sunshine,” which was one of those breakout indie hits that’s become a benchmark by which all potential breakout indie hits must now be measured. Like Little Miss Sunshine, Jack Goes Boating comes ready-stamped with those laurels that tell us it won something at Sundance. Happily, they give out a lot of prizes, and a lot of laurels, at Sundance – to the degree that you must now feel like a right loser to come away without an award for your film. Little Miss Sunshine was bought by Fox Searchlight for $10 million – which is a lot for a small film, but car park change to a big studio – and turned into a smash hit that went on to get four Oscar nominations. There is a fine tradition of indie films going overground, with the help of one the big studios’ boutique arms, and this is why Sundance laurels count, and why, presumably, indie films now follow a fairly strict pattern. In music, “indie” started out as a financial and ideological standpoint and turned into a sound. This has now happened in cinema. Which is why all the indie movie posters look the same. Here are some of them.

On points, these are the kind of American films I usually like. Their posters show ordinary people sitting or standing. Usually shot side-on. We see the ground beneath their feet, because, it implies, they are grounded; they are real; they are not Hollywood action heroes; they are not mythic. In the posters, whether the people in them are photographed, or drawn, they usually sit or stand in front of a block of colour. This gives them the appearance of being in a cool graphic novel. In the case of Ghost World, this was literal: they had come from a cool graphic novel; in The Savages, and prior to that in Happiness, they hadn’t, but were drawn to look like they had. The poster for Happiness was drawn by Daniel Clowes, who created Ghost World. The poster for The Savages was drawn by Chris Ware, who created Jimmy Corrigan.

If we already feel like we’re dipping a toe into the shallow waters of in-breeding, let us consider Philip Seymour Hoffman, one of the kings and kingmakers of US indie cinema. He was in Happiness, and The Savages. He cast Tom McCarthy in Jack Goes Boating; McCarthy also wrote and directed Win Win, which came out earlier this year, through Fox Searchlight, having premiered at Sundance, and it starred Amy Ryan, who’s also in Jack Goes Boating. (McCarthy’s first film, The Station Agent, won an award at Sundance.) The producers of Little Miss Sunshine also produced Sunshine Cleaning, which premiered at Sundance and was nominated for an award at Sundance, and even had the word “Sunshine” in the title. (It also co-starred Alan Arkin, who was nominated for an Oscar for Little Miss Sunshine.) Yes, it’s a cosy world.

Jack Goes Boating, released on Friday, is fine. Hoffman plays a pasty-faced, overweight, socially and sexually awkward, lovelorn limo driver in New York, who negotiates a tricky courtship with Ryan’s socially and sexually awkward telesales person. Because she dreams of going boating when the winter thaws (she needs to thaw, sexually, too, of course), Hoffman’s character must learn to swim in the interim, in order to fulfill her very achievable dream, which gives the film plenty of opportunities for melancholy shots of Hoffman, all pasty and overweight and wet, in his little goggles, in a swimming pool. Being in swimming pools has been a metaphor for people feeling out of their depth because they don’t fit in since The Graduate, which was released at the height of the counterculture that, in many ways, gave birth to the modern spirit of indie. (He is also shot looking forlorn and sad among smiley-face balloons in a greetings card shop, and forlorn and sad before a wall of colouring packaging in a supermarket.)

The performances in Jack Goes Boating are good, and the music is sweet (Grizzly Bear, Fleet Foxes – whaddya know?), but it is just me, or have we seen all this before? This kind of film – the earnest, quirky drama that gnaws at the basic sadness at the heart of modern life – is becoming as formulaic as a Hollywood action thriller. It ticks just as many boxes. The only real difference between this and all the other modern indie movies I’ve mentioned, is that it’s actually set in the city and not the repressed suburbs, or somewhere remote and apparently backward, like Omaha, Nebraska in About Schmidt (another one with a poster featuring a man looking straight into the camera against a flat colour background), or Albuquerque, New Mexico in Little Miss Sunshine, or somewhere in Wisconsin in Lars And The Real Girl (and again). 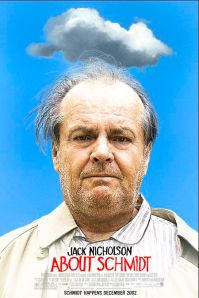 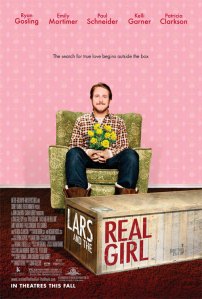 As I say, I’m a sucker for these films. Looking at all these posters that are the same makes me warm inside. It is because of people like me that American indie cinema thrives. It makes the films, it premieres them at Sundance and wins some laurels, it designs the posters to look the same and it gets them to a cinema near me so that I can go and see them. They appeal to me on a basic level as I, too, believe there to be an essential sadness at the heart of modern life, and prefer to see ordinary people in fiction than mythic heroes. But I wonder if we’re running out of steam? And if so, will that simply make more Americans make more films about the essential lack of steam at the heart of modern life?

This has not really been a review of Jack Goes Boating. I reviewed it with John Wilson on Front Row on Radio 4 on Monday, so you can still listen to it for a few days, if you’d like. (It starts at 18.22.)

1 thought on “The same boat”