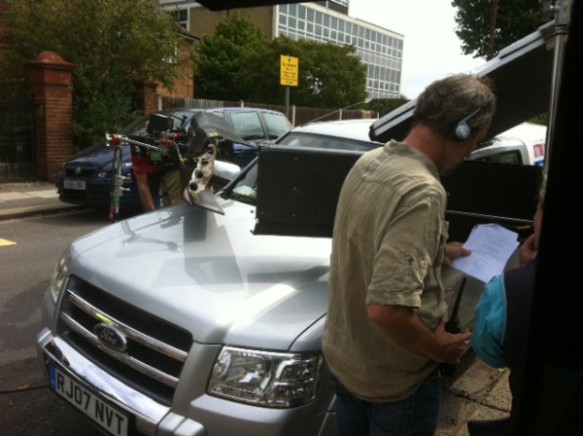 Well, after much cloak and dagger about the latest sitcom project I’ve been working on, the press release has now gone out, so a certain amount of information is in the public domain. It’s called Gates, there are six parts, it’s about the ecosystem of parents and kids that grows and thrives around the gates of a primary school, at drop-off and pick-up, it’s written by four principal writers, one of which is me, and it’s going to be on Sky1 early in 2012. I am the token non-parent on the creative team [see: comment below]. I’m not sure one was needed, but I’m learning a lot about the trials and tribulations of having primary school-age kids.

Here, for the record, is the Sky press release – which you are not obliged to read, by the way:

GATES is an ensemble comedy headed by Sue Johnston (The Royle Family, Waking The Dead), Tom Ellis (Miranda, Merlin) and Joanna Page (Gavin and Stacey, Love Actually) set in the all too familiar chaos of the school gates.

Ellis and Page play parents Mark and Helen who’ve recently moved to the South East where their nine-year-old daughter is starting at a new primary school.

And they’re about to discover what happens when your children choose your friends. Essentially a character comedy, but with a nod to those sketch-like moments of madness which can only ever happen in the playground, GATES casts an eye on how relationships with parents formed during fifteen minutes of a school drop off and pick up can so easily take over your life.  The school gates can be an unforgiving, socially exposed political minefield. GATES boasts a distinguished cast that also includes Tony Gardner (Lead Balloon, Moving Wallpaper), Catherine Shepherd (Harry and Paul, The IT Crowd), Nick Mohammed (Reggie Perrin, Horne and Cordon), Adam Deacon (Kidulthood,  Being Human), Toby Wharton (Silent Witness, The Bill), Nadine Marshall (The Smoking Room, The Shadow Line) and Ella Kenion (The Catherine Tate Show, Dr Who) and the young headmaster Mr Gould will be played by Will Andrews (Pixelface, Mid Morning Matters with Alan Partridge).

GATES will be Executive Produced by Lucy Lumsden and Saskia Schuster for Sky and Laurence Bowen (BAFTA® winner My Life As A Popat) from Feelgood Fiction, and will be Produced by Izzy Mant (Peep Show, BAFTA® award winner Harry & Paul). Sam Cadman (co-creator and director Trigger Happy TV) and Gordon Anderson (The Catherine Tate Show, The Inbetweeners, Shameless) will direct.

GATES will be filmed in Enfield throughout the summer and will be broadcast on Sky 1 HD in early 2012.

With that, there’s no point in me going on about it too much, but since the hairiest of our two directors, Sam, has been posting esoteric snapshots from the location shoot, which is up in Enfield in North London, I thought I’d reproduce a couple here, and say that Gates is currently dominating my waking days. Even though we’ve started shooting it, we – that is, the remaining quorum of writers, plus two producers and three execs – are still working on episodes 5 and 6, honing and improving and cutting for time and nailing down the stories, based upon full cast read-throughs, the latest of which took place this week, in a large room at the actual school we’re shooting at, where most of the chairs are just a little bit too small for adults. There’s nothing like hearing it from the mouths of your cast to ascertain whether it “works” or not.

This is the church hall in Hammersmith where the very first read-throughs took place, and the rehearsals. Gates began life last year when a seemingly random group of writers was assembled around the kitchen table of the exec producer Laurence, including, at that stage, Jennifer Saunders, who has since moved on, leaving us with her good name as script editor of Episode 1. These were pretty lively meetings in a conducive atmosphere, at which all of the characters and stories were whiteboarded into life from scratch. It really was a group effort. Although this approach hints at the American way of doing sitcom, we are of course doing it without the huge budget of a network TV show in the US, where the entire writing team are put on staff, and paid a staff wage, which binds them exclusively to the project (this is why you see so many “producers” on the credits of US TV shows; it’s the writers, who earn a producer credit). Because the remaining four of us all have other work to do, it’s a pretty frazzling time. But sort of exciting. Especially when you visit the set, or see some rushes, or even, hey, read a press release about yourself!

If you’re read the names of the cast in the press release, you’ll know we’ve been very lucky. It’s good to be back in the sitcom saddle again. My last experience of working on TV production was, of course, The Persuasionists, which I script-edited; ill-fated as it turned out, but fun to make, back in 2009. Let’s hope Gates works out better. Shot on location, single camera style, I think it will feel more like a comedy drama than a studio sitcom. That’s the plan anyway. Sky1 are investing heavily in original comedy, and there are about six or seven starting before ours. Some will fail, others will succeed, inevitably. I’m just glad to be standing around, getting in the way of the cables, and sitting round a conference table arguing about whether a particular character would use Andrew Marr as a cultural reference or not.

All I know is: there’s plenty of sitting round conference tables when you’re not making a television show, merely wishing to, so to have something in production feels concrete. And scary.