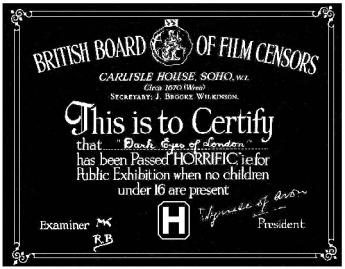 You’ll have heard that the sequel to gross-out horror movie The Human Centipede – Human Centipede 2 (Full Sequence) – has been refused certification by the British Board of Film Classification. Where does this leave a prudish liberal like me, eh? I am, in the marrow of my bones, against artistic censorship. I believe in free expression, and for free expression to be placed in the public arena where it may be judged, or ignored, by the public, in context, as long as no animal or human being was harmed in its making. At the same time, I find the subject matter of The Human Centipede and its sequel – and the gleeful exploitation of that subject matter – revolting and obscene, and I believe that its squalid place in the “torture porn” pantheon represents an irreversible coarsening of our culture, and I’m glad the BBFC isn’t letting them get away with it. Confused? I certainly am.

I had an angry letter published in the Radio Times in 1988 when BBC2 aired one of cinema’s greatest works Apocalypse Now and presented a butchered version, in which the word “fuck” was painstakingly removed or dubbed over – such that anyone who, like me, had pretty much memorised the whole film (we all did that, right?) would feel each snip like a knife to the ribs. This, I pointed out in my letter, was a film about the horror of war, and one of the “fucks” they excised was the one in Colonel Kurtz’s speech where he bemoans the fact that the US military won’t allow its pilots to write “fuck” on the side of their aeroplanes and yet they train them to drop fire on people. This irony was, I suggested, lost on the BBC’s moral guardians. (Needless to say, another reader wrote in to complain about my letter and accused me of getting off on hearing curse words. Cunt.)

I watched the first part of BBC3’s surprisingly good reality show about the war in Afghanistan, Our War (no, Your War), based on actual helmet-camera footage from on the ground with the 1 Royal Anglian regiment, and it effectively showed the death, in April 2007, of 19-year-old Private Chris Gray. Now, clearly his family had given consent, and appeared on camera, and it was sensitively framed and contextualised, and indeed acted as a moving memorial to another young life snatched by war, but some would argue that the BBC should not broadcast a soldier’s death (it occurred in the dusty confusion of an ambush but you saw his dead body being carried away), and that the Ministry of Defence should not have released the footage. I disagree in this case. This is not presented as snuff; it’s a human story with a human message. A similar argument – political, ideological and moral – can be had about whether we have a “right” to see footage, or photographs, of Osama bin Laden’s corpse. At present, those images are censored. But they are not artistic.

In 1988, a young man in the first real heat of ideological indignance, I likened cutting the “fucks” from Apocalypse Now, which was shown long after the watershed, to cutting pieces out of the canvas of the Mona Lisa. I still believe that. And the nasty makers of The Human Centipede 2 (Full Sequence) – in which a pervert masturbates with sandpaper over a DVD of the first Human Centipede film in a metatextual masterstroke – plan to appeal the BBFC’s verdict. They may yet cut a few seconds here and there in order to win a certificate. This happens all the time. It happened to the apparently rather unpleasant A Serbian Movie last year, which won its release.

The BBFC were very clear about why they have effectively banned The Human Centipede 2: their report heavily criticised the film as making “little attempt to portray any of the victims in the film as anything other than objects to be brutalised, degraded and mutilated for the amusement and arousal of the central character, as well as for the pleasure of the audience” and that the film was potentially in breach of the Obscene Publications Act, meaning its distribution in the UK would be illegal. The BBFC actually said that “no amount of cuts would allow them to give it a certificate”. So, we may never legally see this film. (I managed to get my hands on a pirate video copy of A Clockwork Orange and saw that while it was still banned. And this was before the Internet.)

However – and I’m as guilty as anybody for adding to the chatter – The Human Centipede 2 is now the most famous film in the world. Even people who hadn’t noticed the first one have heard of it now. The BBFC have, with the best intentions, made it a cause celebre. Imagine how alluring it will be, especially among teenage boys, now that it’s forbidden fruit!

I suspect I will never see it, either way. I don’t want to see it. I didn’t want to see The Human Centipede, and easily avoided doing do. I watched the trailer and it made me feel ill. So should they actually ban the sequel? The idealist within me says no. If it causes a sick person to do something sick, why should art be censored for everybody else on account of that one sick person? This is a murky area, I know, as I hated the bit in episode two of BBC2’s incredible drama The Shadow Line where Rafe Spall appears to drown a cat. He didn’t really. I don’t imagine a cat was harmed – although a real one walked away looking pretty wet, and they hate being wet – but I really worry that some idiot somewhere will copy what they saw on TV. People can be incredibly stupid, and I genuinely believe that people have never been as stupid as they are now. But can we censor everything because of stupid people? (I’m hoping that The Shadow Line is so intelligent, very few stupid people will have still been watching by episode two.)

If you think I’m going to provide an answer to this dilemma, I’m not. But I’d like to talk about it.