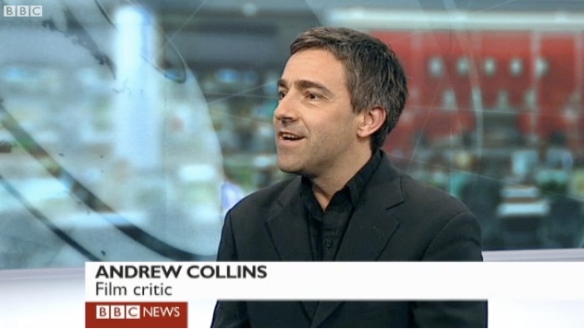 I am a film critic. No I’m not. But I must be. Look. It says I am in a BBC caption. I must be. I have spent the past two Fridays filling in for Mark Kermode in his regular review slot Film 24 on the BBC News channel, so I feel much more like one than usual. It’s fun to do. I’ve been filling in for him, on and off, since April 2008. You can even see my appearances, logged by the BBC, here. The format hasn’t changed a bit in all that while: three new releases, one DVD, and my recommendation for a film that’s already out, usually with Julian Worricker or Gavin Esler to bounce off and a clip for each to cue professionally up. I used to fill in for Mark on Simon Mayo’s show on 5 Live on the same day, but they phased me out of that role last year and replaced me with Nigel Floyd and Boyd Hilton, two men to whom I bear no bitter malice, as I’ve known them both for years, and two less Machiavellian media operators you could not wish to meet. I was replaced for this simple reason: if I was asked to fill in for Mark at the last minute – which is common – I couldn’t always do it, as I needed to have seen all of that week’s films. I probably said the n-word too many times, and a replacement was sought. (Hey, it took two men to replace one. Enjoy that!)

Here how it works. The film companies screen all the week’s new releases on a Monday, traditionally. The national newspaper film critics attend those screenings on a Monday, sometimes a Tuesday, and file their copy in readiness for Friday, Saturday or Sunday depending on their paper. Most weeks there are about ten new films, released on a Friday, with the inevitable blockbuster that comes out on the Wednesday, to scoop up extra bums for seats and steal a march on that week’s box office chart. When, as happened two weeks ago, a Tuesday night screening is cancelled, and rescheduled for the following night, a review of that film (Scream 4) did not appear in that Sunday’s Culture section, due to its long lead-time. You can see how important the Monday and Tuesday NPS’s (national press screenings) are. If, for whatever reason, I am asked on a Friday to fill in the following Friday, I might have other stuff planned in for the Monday, and thus have to turn the Kermode gig down. (Turning work down? In a recession?) That’s why it’s more often than not Jason Solomons who does Film 24. He sees all the films as a matter of course. Do you know why? Because he is a film critic.

I am not a film critic. I review films for Front Row occasionally, for Word, for Radio Times, and that’s it. I go to screenings when I am required to. I have been reviewing films for Zoe Ball’s Radio 2 show – and indeed I’m on this Saturday doing just that (I will be reviewing Thor) – but that’s stopping after this week. As Film Editor of Radio Times, one of my jobs is to write reviews of films when they appear on television, by the magazine’s very nature, which I can do. I can do this because I go to the cinema a lot. I’m lucky to live in London, where there are four Curzon cinemas in easy distance, so, as a member, I’m always up to speed with arthouse and foreign movies. The others I sometimes miss when they come out (although some biggies show at the Curzon, such as, recently, Source Code), but catch up on Sky Movies when they arrive there. I also watch DVDs, of course, and am lucky enough to be sent a number of them from nice film companies. So you can see why I am not a film critic.

Every now and again, if the cards fall in my favour, I play at being Mark Kermode for a week and attend the NPS screenings on a Monday. Here, I see the film critics. Most of them haven’t changed since I started reviewing films professionally in the late 80s! I know one or two to say hello to – Peter Bradshaw of the Guardian, Dr Kermode himself, the aforementioned Boyd and Floyd (hey, their names rhyme!), Chris Tookey of the Daily Mail, David Edwards of the Mirror, the Telegraph‘s Tim Robey, Radio 1’s genial James King, even Derek Malcolm of the Evening Standard, although I spoke to him the other day and he looked like he’d never seen me before in his long life! – but by and large I keep myself to myself before and after the screening, and usually sit in the auditorium on my own.

I have no real interest in swapping war stories with other critics, as I always worry that I’m getting sucked into a clique. If I find out what all the other critics think of a film, it might subconsciously affect my own assessment. Some weeks I sense a consensus when I read through the various newspapers’ film sections, and clearly sometimes an actual consensus arises, but sometimes I fear it has arisen through the sharing of opinion over triangular sandwiches and wine in a subterranean screening theatre in Soho. We are all impressionable.

I have been researching and writing a huge first-person piece for the mighty Word magazine this week about my induction into the world of films aged 14-18 in the early 80s, when I joined the Northampton College of Further Education’s Film Society. This is my first ever membership card. The £6 membership fee entitled you to see 36 films over a year. Looking back, I realise this was my film education. I shall write no more, as it’s all in the piece. But looking back at this golden period, during which, in my diaries, I actually totted up how many films I’d seen (121 in 1981, 144 in 1982, and an astonishing 175 in 1983), I am filled with retro-gratitude. I’m so glad I watched all those films. If I am to be captioned “film critic” by BBC News, I’d better be able to hold my own. And without having seen all those hundreds of films in my mid teenage years, I’d have much less of a grounding.

I really wish they’d replace those high swivel chairs on BBC News though. It’s hard to look authoritative when you have short legs. Mark Kermode has long legs. I can’t compete with that.

9 thoughts on “Everyone’s a critic”