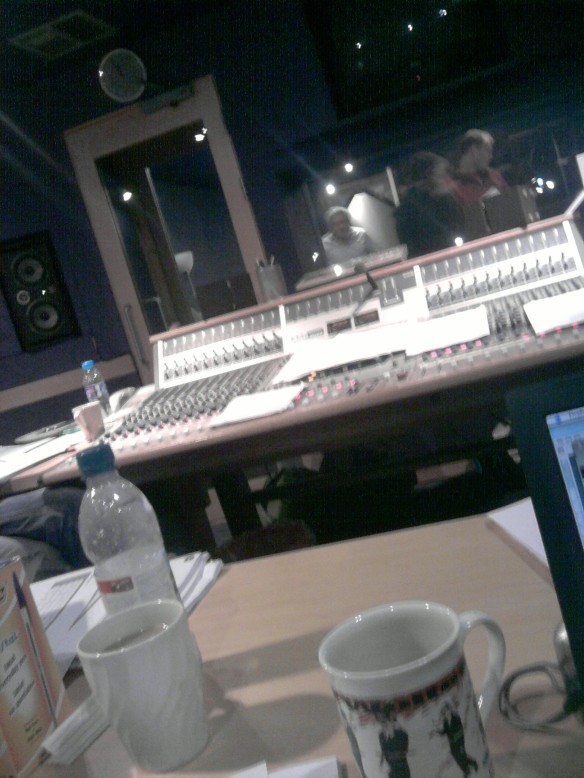 The sun is shining in the sky. There doesn’t appear to be a cloud in sight. (Not that we’d notice, locked in a recording studio.) It’s happening. At last. It took 14 years for me to get here, but on Monday, I arrived at the West London offices of production company Avalon for the first rehearsal of my first ever solo sitcom, commissioned by Radio 4 in September. We are now at the end of the week, with all four episodes pretty much in the can and with an air date of Monday May 16, so I think it’s OK to name it and talk about it, without superstitious fear of disaster. (I have been holding back, calling it “my sitcom” and “the Radio 4 sitcom”, for fear of jinxing its delicate progress to fruition, and besides, it’s impolitic to reveal the cast until the actors’ contracts are dry, as the possibility of last-minute drop-out is very real – as I have learned – and that kind of thing does not send out good vibes. You’ll have to forgive my caginess. I still can’t quite believe this is happening, even though the hard part has now happened.)

The sitcom is named Mr Blue Sky, although the very name “sitcom” sends out misleading messages, as it’s not the type recorded in front of a studio audience. Rather, it has been recorded in a studio, as a drama with funny bits in. A risky strategy but after five years of working on Not Going Out, this is what I have been yearning to do. Without going into the plot too much, it’s about Harvey Easter, a 46-year old optimist living in North Surrey whose life throws at him many reasons to be miserable or pessimistic, but whose pathological ability to see the bright side pulls him through while all around is falling apart. Yes, there is a bit of me in Harvey, and always has been. Having stated that it is essentially a comedy drama, we must consult the Radio 4 Comedy Guidelines, which remind us that recording without a studio audience does not give me “permission to be unfunny.” It does, however, give me certain liberties, and allows me to step outside of the tyranny of punchlines. 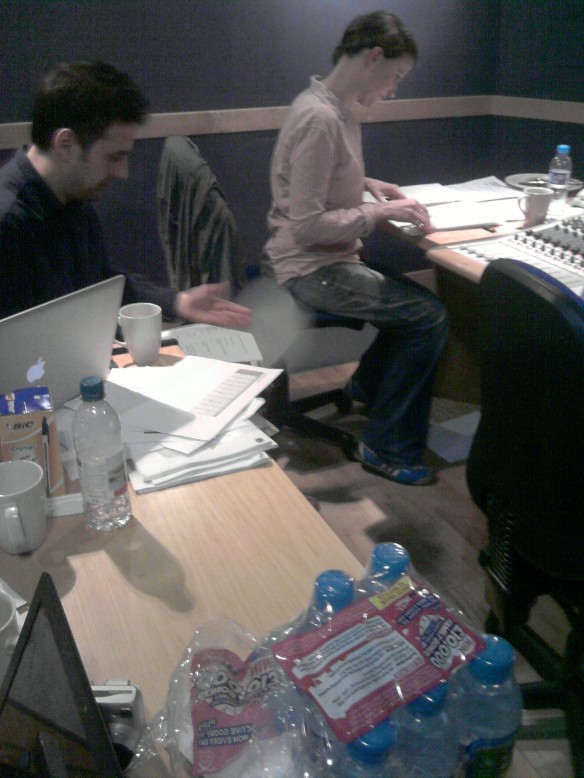 I would say this, and I know that every writer says it about every cast, but we have an amazing cast. I’ve been involved, at a remove, with casting before, on Grass and Not Going Out, but I’ve never been consulted on every actor as I have been with Mr Blue Sky, so this one matters. When you consider the vagaries and variables of assembling a cast with eight principals and one supporting player, each one subject to taste and preference and to availability and contracts, to achieve one with no apparent weak links is a wonder indeed. The mighty Mark Benton, alumnus of too much to mention but let’s throw in Mike Leigh’s Career Girls, Catterick, The Street and Early Doors, plays Harvey Easter; comedy goddess Rebecca Front his wife Jax; the estimable and also The Thick Of It-linked Justin Edwards his best mate Ray the oncologist; Antonia Campbell-Hughes from Lead Balloon and When Harvey Met Bob the Easters’ daughter Charlie; Joe Tracini (The Great Outdoors, best thing in Coming Of Age) as son Robbie; Javone Prince (PhoneShop) as boyfriend Kill-R; up-and-coming actor a certain Michael Legge as Harvey’s assistant Sean; Navin Chowdhry (Teachers) as Rakesh the builder; and last but never least, Simon Day in two cameo parts, because it would have seemed all wrong not to have him. 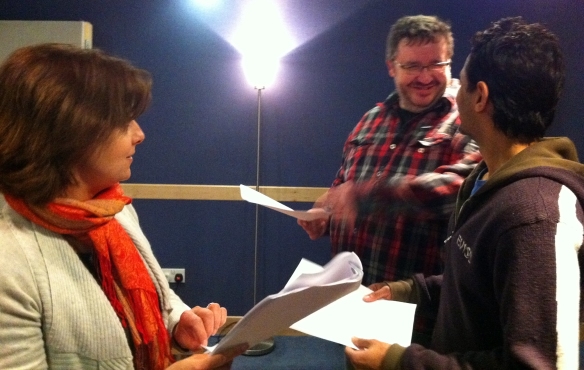 Casting is fraught – as the jigsaw is assembled, you dare not get your hopes up about anybody, and we had to move the recording back a week, so that threw a further cat among the pigeons – but on Monday, with those amazing people sat around the conference table at Avalon, scripts in front of them, it all started to feel real. The first read was fun. I was more nervous beforehand than I have ever been before actually performing. This is my script. If it’s no good, I have nowhere to hide. I have worked very closely on it with my producer and script editor, Anna, and she’s been brutal at times, but you need that. I’ve had this story in my head for a long time, and though it’s been through many changes, Mr Blue Sky is still basically the same as when I first conceived it in … wait for it … 1997, when Mal Young, then series-producing Family Affairs for Channel Five, my first ever scriptwriting job, encouraged me to come up with something of my own. So I did. Harvey was a greetings card salesman at that stage, and he had three kids. Now he’s an assistant manager in a piano shop and he has two kids. But if his optimism once chimed with a broader optimism at the cusp of the Blair era, it’s become more and more misplaced as this country’s politics have decayed and corrupted. I like Harvey even more now than I did then. The bright side is harder to come by in 2011, so he’s even more out of step. 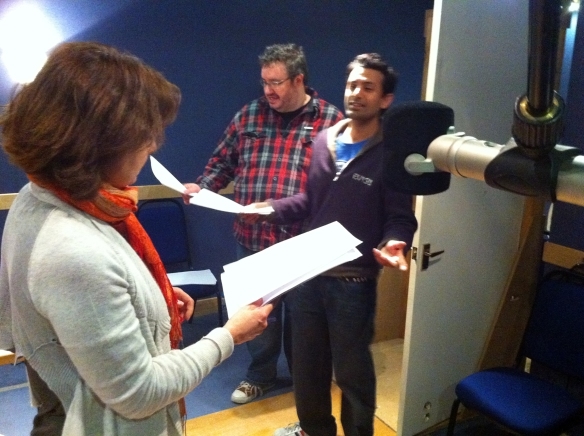 Because Mr Blue Sky hasn’t been recorded in front of an audience, we have been physically able to record it out of sequence, which is useful if certain actors are not required the whole way through, but that said, the plan was always to record it as close to chronologically as we could, starting with Ep1 on Tuesday, and finishing with Ep4 today. (As it’s turned out, we quickly got ahead of schedule, and were able to nip ahead to get scenes in the can early, allowing some castmembers to have the occasional early finish or late start – except Mark and Rebecca, who are in most of the scenes. Acting, like rock’n’roll, is a lot of waiting around.)

Because it’s a comedy, as a writer, you’re hoping for smiles at least, and laughs at the most, and we had enough of those at the first read to reassure me that I’ve not been writing a drama for the last five months. (Navin, in particular, found comedy where I wasn’t even aware that I’d written it! And Joe was such a bundle of energy – he’s actually 22, but plays 16 brilliantly – he kept the room lit up.) By the time we all rocked up at the recording studio in an industrial estate in Shepherd’s Bush on Tuesday morning (our nearest neighbour is the Innocent smoothie factory!), we’d broken the ice and felt confident about the task ahead.

That was Day 1. We had four days to get it in the can. There is a certain amount of boredom built in, at least for the actors, and they spend a lot of their days in the green room, but the studio complex is bijou and comfortable, with plentiful coffee, tea and biscuits, and most actors either know the other actors, or have a director, producer or other actor in common from previous jobs, and quickly find common ground for anecdotes and scurrilous gossip. I’d love to sit with them all day and hear their tales, but I am required in the control room, with Anna, co-director and co-producer John, runner/foley artist Calum, and studio director Wilfredo, a man whose laconic, dry sense of humour takes some getting used to, but what a hero he is, re-flooring the studio for different effects and blocking the actors so that they sound like they are coming down the stairs and entering the kitchen when that is precisely what the script requires.

I love the technicality of all this: the pick-ups and the retakes; the microphone effects; the actual rustling of a duvet to create the mood of two characters being in bed together; the startling variety of sound effects available digitally at the click of Wilfredo’s mouse; the soothing diplomacy over the talkback when actors are invited to try it a different way (“That was perfect, but …”); the dramatic shorthand created by simple proximity of actor to mics; the exaggerated noise of a door handle to suggest a door handle; the way you can hear every conversation the actors have in the studio between takes which is not exactly eavesdropping as they know you can hear them, but an insight nonetheless into their trade as they swap observations about which Sondheim musicals they’ve done. It is, needless to say, exhausting. With an hour off for lunch, you’re at it all day, and although – to pre-empt – it’s not as hard as being a miner, it’s amazing how tiring and emotionally draining it is. That’s not a complaint. I’ve been sleeping like a baby all week. Oh, and waking up at 5.30am and unable to get back to sleep as Mr Blue Sky bangs round in my head. 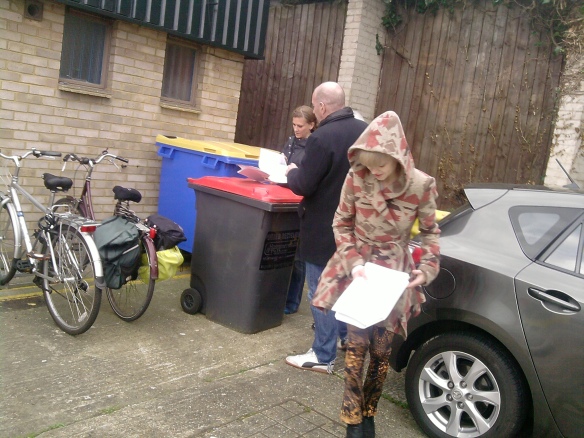 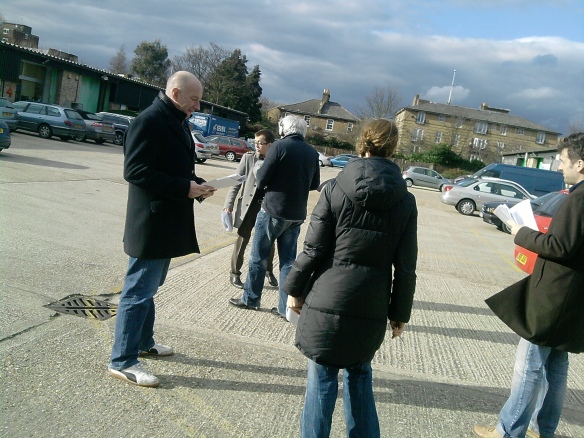 We had fun on Wednesday, which was Simon Day’s one day with us, as both of his scenes the intrepid Wilfredo decided to record outside, so that they sounded authentic. I won’t spoil the scenes by telling you what characters Simon was playing, or explaining why he and Antonia are standing by the bins in these photos (you can also see Joe – glasses – in the bottom pic), but it was a rare excursion outside of the stifling, windowless intensity of the studio and control room, and welcome for that. Yesterday, Thursday, Day 3, I noticed a certain hysteria setting in with the cast – more foul-mouthed swearing when mistakes were made, more silly voices, more uncontrollable laughter – this is understandable and expected. Cabin fever. 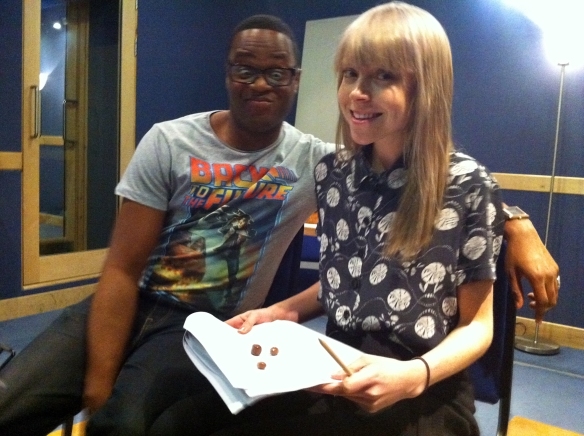 Certain traits and oddities and bits of trivia have arisen from our time together: Javone has given up alcohol and carbs until Lent; Joe can’t eat biscuits as they make him gag (he ate his first in ten years at the read-through and regretted it); Michael rubs his hands together before a scene; Mark wants to present a heavy metal show on 6 Music; Navin has a very good recipe for flapjacks; Antonia sounds American in real life but is from Northern Ireland; Wilfredo is so professional and dedicated he opts for a decaff tea; John wears a coat indoors; and pretty much every member of our multi-tasking cast is writing something currently or involved in pitching an idea to BBC3. Navin finished all of his scenes yesterday, and we bid our fond farewells to this nice man. The rest of the main cast soldier on until the end of today. 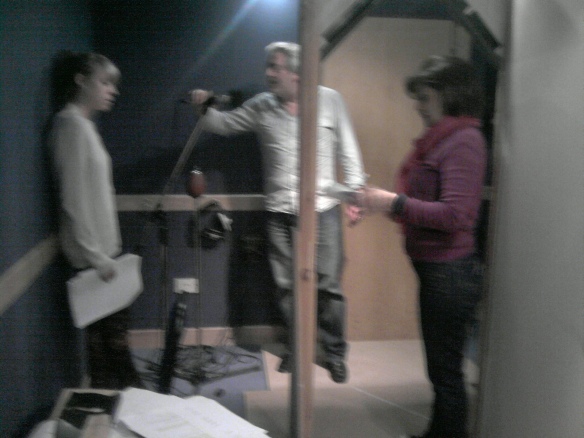 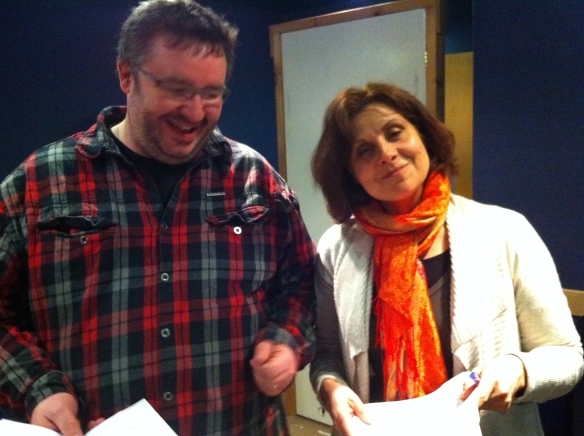 I guess I shouldn’t write too much. I’m going to do a diary of the production for Radio Times. Needless to say, it’s been one of the most intense and rewarding weeks of my stupid career. Whether the finished result will be worth all the heartache is up to you when you hear it in two months’ time. (Anna and John will take charge of the edit over the next couple of weeks. I will probably stay away. It could drive me mad.) Oh, and none other than Jim Bob has recorded ELO’s Mr Blue Sky as our theme song, which will play out under the closing credits. Maybe he will be able to make it available in full as a download? Either way, it’s another thrill to have his name attached to “my Radio 4 sitcom.” The siege mentality that defines these things got us all through it without any tantrums or friction. 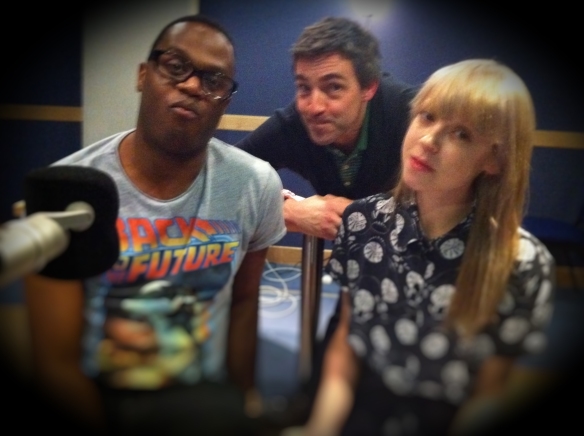 Oh, and a big shout-out to Freddy, Julie and Annabel who run the studio, and brought us tremendous cake every day just when we needed a burst of sugar in the afternoon.

It’s stopped raining. Everybody’s in the play. And don’t you know, it’s a beautiful new day.

Meanwhile, here is a lovely, post-wrap group shot, taken using Wilfredo’s iPhone. A left to right would seem to be in order: 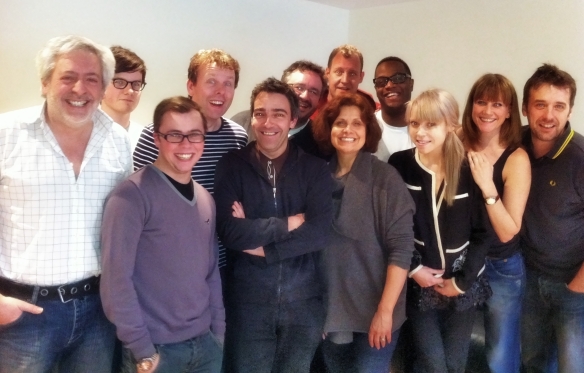 18 thoughts on “Permission to be unfunny”