Another crazy, crazy, crazy night out at Karaoke Circus. I’ve been slack and missed a couple of consecutive KCs in London, including the Christmas extravaganza, although I was lucky enough to be at, and a part of, the Edinburgh circus tent special in August. Anyway, having moved the circus to my half of London, boldly relocating to Vauxhall – home of the RHINO NOT FOR SALE sign – and specifically to the Royal Vauxhall Tavern, one of the gayest bars in the world, you might call last night’s something of a rebirth. The venue was just perfect: cosy and circular, and with more gents toilets than ladies, but big enough to accommodate and in many cases seat a teeming intake of “Yay!”-shouting, homemade-cake-eating comedy nerds. And the staff were terrific, especially Paul the barman who got up and did a criminally soulful open spot of Dock Of The Bay and won! All round, a happy evening, with highlights too many to list, although I’ll chance a couple, for fear of picking favourites: Robin Ince’s Rise, which even the eminently adaptable house band of Martin, Danielle, David and Foz couldn’t breathe life into, and which Robin turned into irascible performance art (increasingly his metier); Howard Read’s Rhinestone Cowboy which involved actually vandalism; husband and wife team Margaret Cabourn-Smith and Dan Tetsell making the most of their babysitter by reimagining Beyoncé and Jay-Z’s Crazy In Love; and Pappy’s bringing the house down, very much in the spirit of Karaoke Circus’s new gayness, with a costumed and then not-costumed celebration of It’s Raining Men. A pair of denim shorts was thrown.

As for my own contribution, which has had me playing the same song over and over and over and over again on my iPod for a week in order to learn it, I paid shouting tribute to Carter USM’s The Only Living Boy In New Cross (which, again, seemed apt for the new South London location). I still forgot the middle of the “Eyes down” bit, but I think pulled it back from the brink with gusto if not finesse. I believe I am right in saying this was a Karaoke Circus first: a song sung while the original singer of the song was in the room ie. Jim Bob, who was gracious in his assessment. I apologised to him from the stage, of course. There are tribute acts and there are “tribute” acts.

Thanks, as ever, to Martin and Danielle for having me. I can’t think of a more sociable family of people, which includes all of the audience. On the way home, through the tunnel under the railway line, I passed The Baron and Foz without their clown makeup on. I hardly recognised them. A poignant end to an outrageous evening. The photos are Paul Bailey’s and the full set are here. 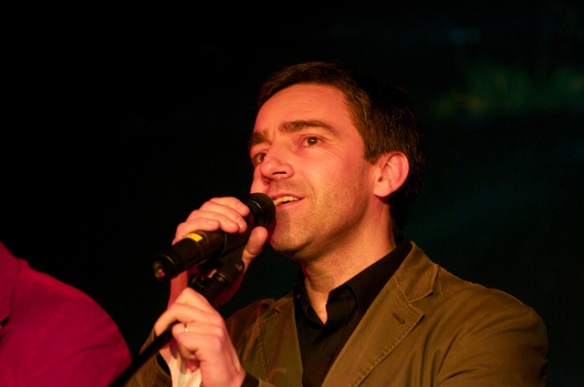 And here’s a dodgy mobile video made by Frog Morris of my Carter turn, complete with judging by Daniel Tetsell, Jim Bob and The Baron.

And a couple more shots, these from Diamond Geyser, of Paul the barman collecting his prize, and, well, an action shot of me. The full set is here.

3 thoughts on “Vauxhall and we”