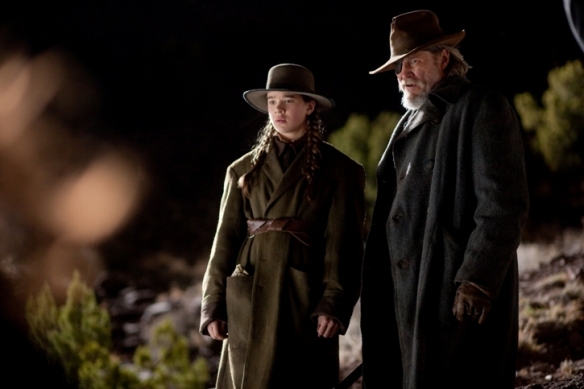 After Never Let Me Go, I needed to see something that was going to live up to expectations. True Grit fulfilled that brief. I speak as a fan of classic westerns, a fan of the Coen brothers, a fan of the Henry Hathaway original, a fan of Jeff Bridges and Matt Damon, and a cynic of Hollywood remakes, which, for all the dressing up, this is. The Coens use the Brighton Rock Defence and claim that their True Grit is a remake of the original 1968 Charles Portis novel and not the 1969 Hathaway film, which won John Wayne his only Oscar. Certainly, the novel seems to have revolved around its 14-year old protagonist Mattie Ross more than in the subsequent first film, which became a vehicle for Wayne as fat, drunken, one-eyed marshal Reuben “Rooster” Cogburn. Here, although Bridges eats up the screen with his own drawling take on the character, Mattie (played near-miraculously by then-13-year-old Hailee Steinfeld) reclaims centre stage. It’s her film – which is to say, it’s Steinfeld’s film – and in that sense, the Coens have repositioned what most people know as a John Wayne film incredibly successfully.

I love the original, but that’s really because I have an enormous soft spot for Wayne and for the mythic iconography of the western. This is not a “revisionist” take on the genre; it is an overwhelmingly affectionate tribute to the great westerns of the past. The Coens love westerns. Some of their previous work hints at this: Blood Simple, with the cowboy boots and pistols of its Texan setting, might structurally and thematically be described as a modern-day western as much as a neo-noir, O Brother Where Art Thou? has a western-style relationship with the wide open spaces of the American landscape, while No Country For Old Men might as well have been a dry run for their first, full-on cowboy film set in the Old West. They were born to do True Grit. And what a triumph it is. I don’t often see films that bring to mind the word “faultless”, but this did.

The fact that it’s a remake, and that the story is so familiar to me, becomes irrelevant almost instantly. The Coens make it their own. The script is so beautifully crafted and sculpted, and witty without being jokey, it is a pure delight to listen to. In the mouths of Steinfeld, Bridges and Damon, this highly decorative but homogenous language takes on its own character, and whether it’s an exchange between Mattie and the horse trader, or Damon’s LeBoeuf and Cogburn, or Mattie and outlaw Ned Pepper (Barry Pepper – what a fortuitous bit of casting!), their individual relationships emerge. There’s some fine, nuanced acting going on here, and if Steinfeld and Bridges don’t scoop up something at tonight’s Baftas or next week’s Oscars, there is no justice.

The Coens are prone to irony, which is what makes their comedies such fun, but when they step back from this fruitful form of postmodernism and play it a little more sincere, it pays dividends. (For instance, I enjoyed Burn After Reading, but feel no need to see it again. I have watched Fargo many times, and Blood Simple, come to that. Oh, and I hated The Ladykillers just as much as you did.) Although True Grit is a genre picture, it does not seek to overturn or modernise – or “revise” – that genre; it is reverent to its source, and as formal as they promised at the outset: the iconography is present and correct – there’s a truly stunning shot with the three riders, Mattie, Cogburn and LaBoeuf, captured within a glorious landscape (New Mexico stands in for the Choctaw Nation or what became, in 1907, Oklahoma) and it’s simply perfect – and the soundtrack, by longtime collaborator Carter Burwell, breaks new old ground by working in hymns of the time, thus making it ineligible for the Best Original Soundtrack Oscar, the same cruel fate that befell Clint Mansell’s impressive score for Black Swan.

If you don’t like westerns and what made the classic westerns great, you might understandably not like True Grit. (There were three teenage boys in the row in front of us at the Curzon who were fidgeting and rustling crisp bags most of the way through it – I’m not 100% sure what they were doing in there in the first place.) But the Coens’ attention to texture and composition as well as to performance and language make it one of their very finest works. And who would have guessed that from the news that they were doing a remake? It stands with the very best westerns; for me, it’s the equal of Unforgiven.

10 thoughts on “This much is true”