1. How I Escaped My Certain Fate Stewart Lee (Faber) Quite simply one of the best books about comedy – the history of, the mechanics of, the craft of – I have ever read. Do not approach it as a memoir, and you will not be disappointed. It is that, but only in disguise. And if the idea of a man dissecting and annotating five of his own routines, in painstaking detail, with candour and self-loathing, does not appeal, my guess is that you are not a Stewart Lee fan. Michael Mcintyre could not, would not, and would never wish to, do this to himself and his work. Rarely has a grown man saying, “Go away!” been so welcoming.

2. The Shallows Nicholas Carr (Atlantic) Must be coming out in paperback in 2011. Definitely worth a read if, like me, you worry that the basic skills of reading and concentrating are being eroded by clicking and scrolling.
3. Storage Stories Jim Bob (Ten Forty) You’ll have to forget that Jim is a friend of mine. If I didn’t like his first novel, I wouldn’t put it in my Top 5. I really like it.
4. When The Lights Went Out: Britain In The Seventies Andy Beckett (Faber) Haven’t finished this yet, but I am really loving it. For the record, it was first published in 2009, although the paperback came out in 2010. What the heck? I’m actually reading a pre-publication proof which Faber must have sent me ages ago, because of course I love the seventies, but I only picked it up a few weeks ago. I’m currently reading, and enjoying The Kennedys: An American Drama by Peter Collier and David Horowitz, which was first published in 1984. It sort of doesn’t matter, does it? I’ve been cutting back on spending this year, and have so many books I’ve never read, it seems profligate in the extreme to buy more.
5. Living Dolls: The Return Of Sexism Natasha Walter (Virago) This isn’t a perfect book – in that, as the mother of a young daughter who likes dressing as a princess, Walter seems as much part of the problem as the cure – but it got me thinking, and reminded me that I am a feminist.

Note: I have pretty much stopped going to live gigs. It just doesn’t appeal. Oddly though, I saw Jim Bob twice this year, at the Garage in Islington, where I supported him (what a disaster that was!), and at the Bull & Gate in Kentish Town. I sort of love the fact that an artist whom I first started seeing on the London indie circuit in the late 80s has taken me back there this year, just when I least expected it. I was grateful – however ungrateful I seem – to see his support acts on those two occasions: Chris T-T and Tim Ten Yen. What I’m driving at here, is that any list of live events that I have been to is pretty random, and presents merely a wonky snapshot of what gets me out of the house when I am quite happy to be in the house. I also present it without irony, in that I realise that if I hadn’t been performing this year, I wouldn’t have seen any of it really.

1. Assorted, Various venues, Edinburgh Fringe 2010, Edinburgh
Unfair to pick out individuals, as it was the cumulative effect of seeing show after show after show, and the unsettling knowledge that I either already knew the performer or would be having a drink with him/her directly afterwards, that made Edinburgh so memorable. That said, I particularly enjoyed seeing Jeremy Lion Goes Green at the Pleasance, Christ On A Bike at the Assembly Rooms, AIOTM at the Assembly Rooms, Sarah Millican at the Stand, Political Animal at the Stand, Gary Delaney at the Pleasance, Pappy’s Fun Club at the Pleasance (a valiant battle with technical woes, which made it all the more triumphant), Tara Flynn at the Gilded Balloon, Gutted: The Musical at the Assembly Rooms, Mat Ricardo at the Three Sisters and Mr B The Gentleman Rhymer at the Three Sisters.

2. Ward and White’s Karaoke Circus, Assembly Tent, Edinburgh
Again, I was in this, but it was still one of the most entertaining and unifying nights of comedic variety I have ever encountered, and I’ve been to a few Karaoke Circuses in my time. It was a combination of the late hour, the venue size, the venue type, the overflow of celebrities just hanging around in the audience, some particularly offensive loudness from certain quarters, and an augmented band at the top of their game. Thrilling. If you were there, you will concur.
3. Hamlet, National Theatre via Curzon Mayfair, London
I don’t do theatre. This made me wonder why. Rory Kinnear casually electrifying.
4. Jim Bob, Bull & Gate, London
OK, so that’s somebody who’s a friend in my Top 5 Books and my Top 5 Live Events. Deal with it. After sterling and appropriate support from Chris T-T, then a car crash courtesy of me, Jim made the evening his own, combining book readings, Carter songs and solo material, and a climactic bubble display by Mr Spoons.
5. Greg Davies: Firing Cheeseballs At A Dog, Bloomsbury Theatre, London
Missed this at Edinburgh, happy to have caught it here. This is a man, playing himself, set to eclipse both We Are Klang and The Inbetweeners. Watch him go. 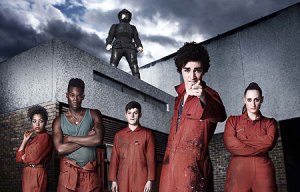 Note: not as much of a vintage year as 2009, during which I devoured the whole of Battlestar Galactica and House, and was able to hail Breaking Bad as one of the great shows of the year. We’re still waiting for Season 3 of Breaking Bad. It has not been replaced in my house. I found myself bailing out of a lot of long-form US imports this year, and not just the obvious duds like The Event – I also found myself ultimately ungripped by The Walking Dead and Sons Of Anarchy, which are both clearly quality products, they just didn’t grab my insides, which I’m afraid I now expect. However, although missing out on the number one spot, the Americans do still dominate my schedules. Long may they continue to do so. And long may British telly keep trying to achieve their greatness.

Feel free to inform me that I’ve missed something obvious. I will have. It’s not an exact science.