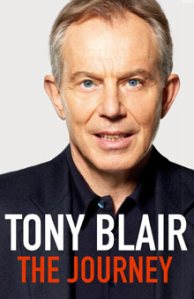 It’s the fastest selling autobiography of all time. It’s A Journey, by Tony Blair. Formerly titled The Journey, but, after what publishers Random House (my publishers!) described as “a minor editorial decision”, this was stripped of some of its portent and pomposity with a clever switch from “The” to “A”. But they’re fooling no one: if this book was just a journey, it wouldn’t have sold so many copies in the first 24 hours of publication, outselling Peter Mandelson’s memoir three to one, and presumably singlehandedly saving the book industry from digital doom. The book is, like its author, very bad at humility.

I was on holiday last week, but Tony Blair followed me. August is known to be a slow news month, so you kind of expect front pages to be built around what’s in some books (Bjorn Lomborg, another twat, enjoyed the front page of the Guardian last week, too, because he’s got a book coming out). But the fanfare which greeted our former Prime Minister’s memoirs was deafening. The salient points were hungrily filleted and splashed across our newspapers, desperate after William Hague’s selfish failure to be gay for revelations about Blair’s record-breaking 100 years in power. These were, in brief: he thinks Gordon Brown lost the last election (he did); he had sex with his wife a bit, and on the day John Smith died – which he predicted! – he was a bit of an animal in bed; he warns against trying to be “matey” with the Queen; he thought the Finnish Prime Minister should “get a life”; and he feels really bad about all the people who’ve been killed because of him, but he “can’t” apologise for taking the country into war. That’s pretty much the long and the Clare Short of it, but love him or loathe him, you had to buy his hardback book, apparently. I own one of Margaret Thatcher’s memoirs, but I bought it in paperback years after its publication, and only because I was planning to write a novel about the Falklands. I expect Blair’s will be just like that: sketchy and selective, and not especially candid. (Admittedly, she doesn’t talk about having sex with Denis. Thank God.)

It seems that even people who hate Tony Blair have bought his book. This must be the case, as most people hate him. Don’t they? And I meant people who used to like him now hate him too, right? It’s the sheer promise he represented that makes him such a historic disappointment. (I got into trouble on Twitter for idly stating, for effect, that “everyone” hates Tony Blair, and a perfectly reasonable woman gently took me to task, as she clearly doesn’t hate him. Fair enough. I was generalising to make a point in 140 characters.) Although the admirable protests that met the author’s arrival at the marvellous and politically-charged bookshop Easons on O’Connell Street in Dublin made the headlines – especially as some protesters threw eggs and shoes – many Blair admirers queued up all night to get their books signed, mainly those who felt his part in the Northern Irish peace process was an achievement and – Blair’s favourite concept – a legacy worth celebrating.

That is for them to decide. For me, the fact that he sold Labour, and the Labour movement, down the river, systematically dismantling all that the party once stood for when it was proudly unelectable, is a greater legacy. And the invasion of Iraq is not even something I’d forgive him for if he had the letters of the words I AM SOOO SORRY tattooed across his, his wife and his children’s faces, one letter per cheek, and was forced to walk in a line with them, in the correct order, for the rest of their lives. Gordon Brown may have proven useless, but it was Tony Blair who lost Labour the last election. It is he who has given us the Tory government so many people seem to reflexively hate. It is he who had made Labour inelectable again, but for shoddy reasons, not noble ones. Without him, we might have a few more up-and-coming politicians who weren’t 41, and didn’t all look the same. He’s arsed it up for a long time to come.

Incidentally, according to the venerable Andy McSmith in the Independent, one of many hacks and politicos forced to speed-read all 720 pages of A The Journey this week in order to bullet-point its contents, this is what Blair writes about his decision to push through the Freedom of Information Act, which came into force in 2005: “Three harmless words. I look at those words as I write them, and feel like shaking my head till it drops off my shoulders, you idiot. You naive, foolish, irresponsible nincompoop. There is really no description of stupidity, no matter how vivid, that is adequate … Where was Sir Humphrey when I needed him?” This is Tony Blair showing us that he is capable of the human emotion of regret, and is not afraid to admit what he regards as a mistake. Except shaking his head about the Freedom of Information Act, which has mainly hurt the government and MPs, even shaking it until it falls off, just makes his refusal to regret Iraq all the more galling.

In writing this, I am merely adding to the chatter. His interview with Andrew Marr, which was hardly the Chilcott Inquiry, but which Blair treated with the same grinning contempt (why does he snortingly laugh when exasperatedly reiterating that he takes no pleasure from the deaths of soldiers?), drew 1.8 million viewers, while Jon Snow’s concurrent grilling of the five almost-interchangeable Labour leadership candidates on Channel 4 drew about 0.5 million. It’s as if, truthfully, we’re still dazzled by the man’s celebrity. I say we, because I cannot claim to be ignoring him. I’m not. I’m caught up in it too. I wish he’d fuck off.

Tony Blair is donating his advance and all his royalties from The A Journey to the British Legion so that they can use it to help rehabilitate soldiers injured abroad. Why not – as Al Murray suggested on 5 Live this morning – just see how little your local bookshop is having to slash the book’s cover price to (£12.50 at Waterstone’s, from a RRP of £25), and donate that to the British Legion instead. That way, you circumvent a man’s ego. An ego which needs no further massaging.

13 thoughts on “A definite article”