Last day in Edinburgh for me, and the last of the Collings & Herrin Podcast shows. [Nice shot by Gordon Hodgson, above.] I must admit, it was a pleasure, for the first time this Edinburgh, to wake up in the morning and not have to think about doing Secret Dancing. After 16 consecutive shows, during which my life has hardened into a routine which allows for very little improvisation other than which outlet to sit and eat my mind-and-stomach-settling breakfast in (Foodies? Henderson’s? Black Medicine?), it was lovely to get up a bit later, take it easy, mine the papers a little more carefully for stories, and know that the only performing I’d be doing was the podcast, which by its nature can’t really be prepared for. (Ironically, I came to it armed with a lot more stories, but none of these really made it better!)

So, there we were, on the plastic chairs at the tin table for the tenth and final time this Fringe. Because Saturday’s, Podcast 130, was – by accident rather than design – my favourite, this final one had disappointment built in. And maybe the fact that I wasn’t energised by having just come offstage at my own show put me off my stroke. I was certainly not excited. And I was a bit irritable, which is no state to be in, as listeners to the live podcasts will know. Maybe ten is too much. Maybe the venue is too small and long. Either way, 131 was a bit strange, and not especially uproarious.

Still, it’s in the bag. You can download it here, and here is the official blurb:

In the final live Collings & Herrin Podcast from the GRV in Edinburgh, we go out in a significant lack of style. We should have ended it after 130, but no, it was almost as if we were committed to do 131, and treated it as just that: an obligation, with no joy or narrative denouement whatsoever, despite a big pile of prizes for the nicest audience members, including a Millie’s Cookies loyalty card, an Apostrophe (whatever that is) loyalty card, a McDonald’s loyalty card and a Piemaker loyalty card, as well as some Space Dust Which Isn’t Space Dust. Andrew gets booed again for mentioning the name of M*ddy – par for the course, now – Richard is sexually frustrated by the lack of women in the front row and is forced instead to imagine having a strawberry tattooed in a private place and smearing it with clotted cream, and we unearth a single X-Factor fan in our audience, and four Top Gear fans, one of whom is female. It’s either the best one yet, or the worst, and certainly our last for a long, long while. So tuck in. 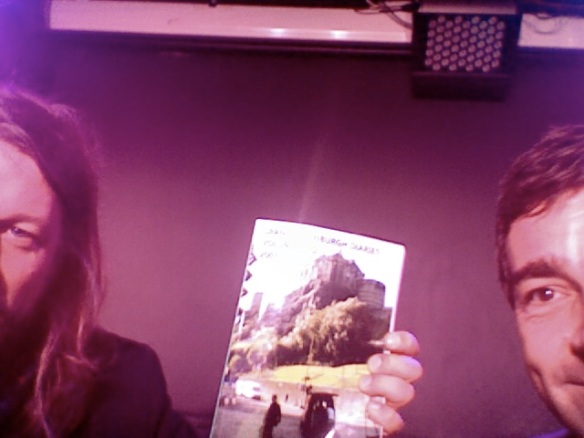 And here are the final audience. 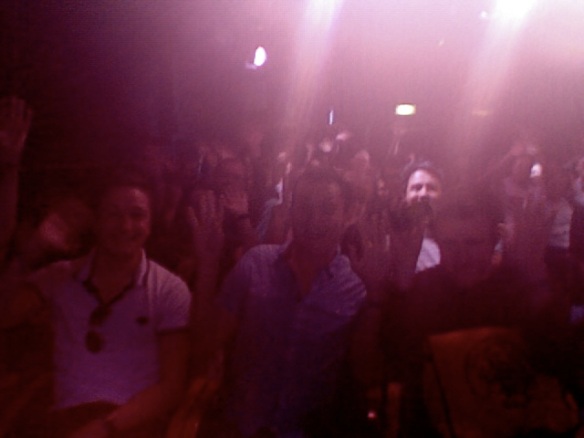 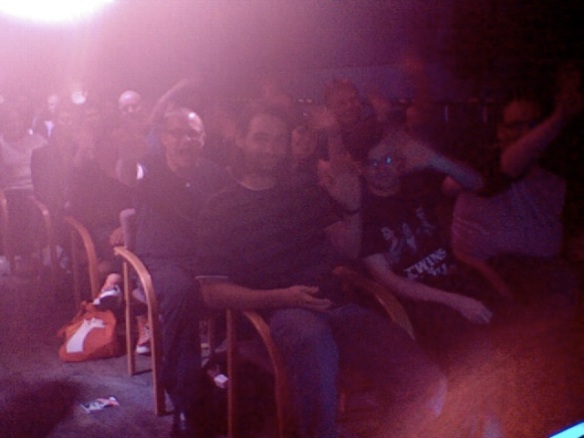 After the podcast, I went for Sunday lunch with my friends Tony and Helen. They made the lunch. It was tremendous, and a rare moment of civilisation away from the madness of the Fringe and grubbiness of the student living. Unfortunately, I drank a couple of glasses of wine and was so dozy could have fallen asleep on their sofa directly afterwards, which would have been impolite. Instead, I came back to the Young Ones flat and went to bed. I am exhausted. I woke up, too late to go out carousing on my last night, as planned, and instead finished my column – about the Fringe – for Word magazine, and sat around in the living room with Richard and Tom, half-watching The Xtra Factor. Actually, it was a sociable and low-key way to end the festival. (For me; all of my flatmates, who are comedians, have another week to go – in Richard’s case, his last show is next Monday, that’s eight shows away.)

Thanks to all who made the Fringe so much fun, and such a milestone: Charlotte, Mark, Frog, Theo, tattooed Chris and the staff at Bannermans, Lindz and the staff at the GRV, Lisa and Jon and all at the Five Pound Fringe, Peter, Al, Simon, Kate and all at the Free Fringe, Agent Kate, Robin, Carrie, Michael, James, Muki, Sarah, Gary, Tara, Carl, Jim Bob, Martin, Danielle, Foz, David, Emma, Dan, Margaret, Ben, Mat, Lesley, Al, Helen, Iain, Greg, Matt, Tony, Helen, all of Legge’s Lovelies … and especially, my flatmates Richard, Tom, Justin and, briefly, Vinny.

Now to catch my train.