Thanks to PB O’Connor for this nice in-queue pic from outside Bannermans (or Ban A Teenager, as I call it) today. Interesting: another full house, but noticeably less forthcoming with laughter today. They seemed happy enough at the end and applauded loudly at the Secret Dance-off demonstration, but many of my favourite lines elicited very little in the way of noise. This is not me being a spoilt brat; I just genuinely find it fascinating that a house can laugh or not laugh so pointedly. I still enjoyed performing the show, especially Masterchef and the birding ambitions, but fullness of house does not necessarily equate with loudness of reaction.

With no time to ruminate on this, I rushed off afterwards in order to arrive at Assembly – the Ballroom, again, my only Assembly venue this year so far – in time to be snuck in to my reserved seat in Row 3 for Richard’s big folly, As It Occurs To Me, written overnight and something of a headache he didn’t need. He turned the fact that I’d offered to help him write it into a section of the script, so in a way I did help him write it. I knew I was going onstage at the end, in a metatextual denouement based upon the reappearance of the fictional, tiny version of me in his fevered imaginary world, and my own appearance, as myself, accompanied by a lawyer and taking over the show. It was fun to sit the whole thing out as an appreciative audience member (it really was very funny indeed, despite the rushed genesis), but also get to go on and soak up some reflected – if distorted – appreciation. Richard had given me the script just before I left the flat at 11.30, and I didn’t have time to read it. Because I was sat in the audience, I didn’t want to wave a script around in my seat, for fear of destroying the flimsy illusion that I was there to spectate and not take part. So when I did go up onstage, I was pretty much reading my words for the first time as I “performed” them. I enjoyed the fact that I was reading words which had so obviously been put in my mouth by Richard Herring (“Richard Herring is my hero”). It’s a huge in-joke, AIOTM, and it’s fun to be part of, especially as it’s able to pull in about 300 paying customers without a stitch of advertising, or even being in the Fringe programme.

Richard should be very proud that he and TV’s Emma Kennedy can sing a racist duet of the theme from Dirty Dancing as Tam Dalyell and Susan Boyle, without even changing the words, wearing £2.99 “Jimmy Hats” and get laughs, in Scotland.

Although his imaginary girlfriend was leaving Edinburgh and he had to walk her to the imaginary station, he still managed to magnanimously buy us all lunch at Chez Jules: that’s myself, Dan Tetsell, Emma Kennedy and actress Lizzie Roper, who wasn’t even in AIOTM, but happily ate as much food and drank as much drink as she humanly could on Richard’s tab.

Here is a pic Gordon “Green” Hodgson took of Emma onstage, which presents her very much as the spectre of herself.

In other news, the interview I filmed for EdFestTV with host Richard Mackney last week is now online and available to view. It’s show number 6, which also includes Tom Allen and some nice harmony singers and a weird man. It’s all chopped together in a trendy way, but it’s flattering to be invited to be on it at all.

Having done my own show, then AIOTM and eaten a tiring lunch – at which Emma ordered a coffee with Cognac in it, but left it, and both Dan and I found ourselves independently putting our hands under a paper towel dispenser in the gents and waiting for it to start blowing hot air on them – I need a burst of energy in order to get my sorry arse back up the Pleasance, see Jeremy Lion, and prepare for an appearance at Karaoke Circus at midnight.

And I know how much Richard likes it when I put screen grabs of myself, but even he will not think it self-aggrandising if I post some taken from a tiny little internet TV show segment. 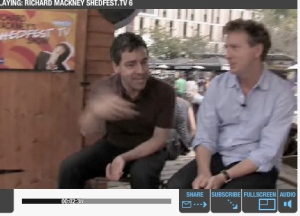 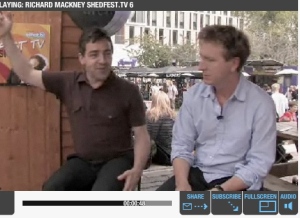 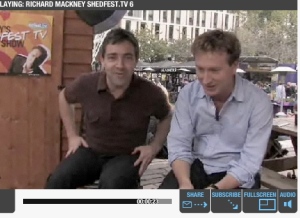 Can this be any way to earn a living?