Northampton, Northampton, Northampton, middle of England! Can I just pay tribute to my home town? Saturday saw what was, for the inexperienced me, the culmination of a week of Edinburgh previews for my show Secret Dancing. In other words, I’d done one in London on Wednesday, and one in Brighton the next time, and this was my third. (I know, it’s small fry compared to, say, Richard’s Christ On A Bike previews, which seem to be happening pretty much every night. But his is a far more sophisticated, written show, conceptual, precise, and technically demanding; mine is a “genial ramble”, and I suspect it will evolve a little over 16 performances in Edinburgh. Oh, and it’s free, whereas Richard is charging money, and that is precisely why I’m doing it under the Free Fringe umbrella. It will, I hope, be the perfect setting for my solo debut, even though Richard says I have still priced myself out of the market.)

Anyway, having now done the show three times, in full, with three dry runs at the Hen & Chickens before these, I think I can confidently say that I can remember where it all goes, and that the additions and cuts I’ve made along the way are helping improve the overall shape and rhythm. In a way, it should feel like I am just chatting and telling stories, jumping from one subject to another. If you’ve seen it and agree with that assessment, I’ll be happy to hear from you. London, at the Phoenix, was odd, in that I had a lot of family and friends in – something Michael Legge had a lot of fun with in his stand-up set, and which I think they enjoyed in the correct spirit of the occasion, which was a bit like Boxing Day or something. Naturally, it was my family and friends who heckled! For all I know, it might have made other audience members uncomfortable. Either way, I enjoyed doing the show from one end to the other, and trying out an elaborate opening gambit which I have, since Brighton, scrapped, for the sake of geniality and simplicity.

Off to Brighton the next night, on my own, I experienced what must be the default emotion of the actual, professional stand-up comedian: a weird sense of isolation. It was a lovely day, blue skies, and the sound of seagulls and smell of the sea – and the sight of already drunk people at 5pm, everywhere – made me feel at home. I love Brighton. And when I arrived at the Three & Ten pub, to meet Nicky who runs the venue there, with my bags and expectant face, I was cheered to learn that we had sold 29 tickets! Despite a faulty microphone (hey, I wonder if any other comedian has ever experienced this?), I think I managed to connect with the audience, seated in rows, and I managed to entice two volunteers for the Secret Dance-off at the end, one of whom actually wanted to be onstage (thank you, Viks). I know I sounded nervous. I was nervous. But nerves are to be defeated. I am a lucky man, in that through the podcasts with Richard, and now the radio show, I have kind of landed in the middle of an available audience, a handful of whom are prepared to come and see me without Richard, which I know is a risk! I wonder if I end up soaked in sweat because it is hot outside and hot in the small venues, or because I am in actual peril up there? Either way, after an enjoyable time at the Three & Ten, but forced to catch the train because I was due on 6 Music breakfast the next morning, I was embarrassed to be lined with tidemarks on my black t-shirt. Must start travelling with a spare. You live and learn.

This photo, taken by Verity Knight, is from the Nook Cafe, at the Fishmarket, in Northampton on Saturday night. I think that might be the back of my sister’s head on the left! Thanks to amazing pre-show publicity in the Chronicle & Echo (thanks, Ruth!) and on Radio Northampton (thanks, Sarah and Pete!), plus the novelty factor of me coming home to Northampton having moved away 26 years ago, we sold all the seats in this bijou but splendid venue. By day it serves vegetarian sausages to Alan Moore – really! – and by night it becomes a venue, and later a disco. All praise to Tamsyn [pictured above with a perspiring me, post-gig, and in the Secret Dancing pic] who runs the place, and whose reputation precedes her in the town. She, and Joe, and the rest of the team – many of whom can also be seen Secret Dancing in the pic – run an amazing space.

I reorganised the show after Brighton, and Northampton saw hopefully the most evenly paced version thus far. I could see their faces at the Nook, as the lights weren’t as theatre-bright as they were in Brighton, and that’s always offputting, as you can see non-laughter. It was a lovely, mixed crowd, and I hope there was something in my ramble for everyone. During my serial killer identification test, nobody had their hand up after I’d asked if they had “feelings of inadequacy,” so either the comedy fans of Northampton do not have feelings of inadequacy, or they are lying.

So, as I leafed through some copies of Alan Moore’s Northampton fanzine Dodgem Logic on the train back to London on Sunday (Joe from the venue works on it as an editor), I felt a real connection to my old Northampton haunts. I do actually remember the Fishmarket when it was, yes, a fish market. There are even some original marble slabs in there, as a reminder of its former role. But I like the fact that it’s now an arts-collective-run gallery and venue and cafe and market, and hangout for Alan Moore. It’s not how I remember Northampton. (There’s a nice review, which gives a good flavour of the town and venue, by Wishus, the Bard of Northampton, here.)

I hope to return to the town after Edinburgh, unless, of course, the experience kills me. In which case I will be dead.

Oh, and here are some more pics from the Secret Dancing dance-off at the Fishmarket: 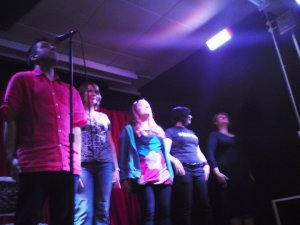 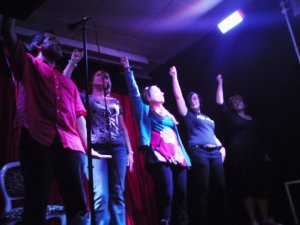