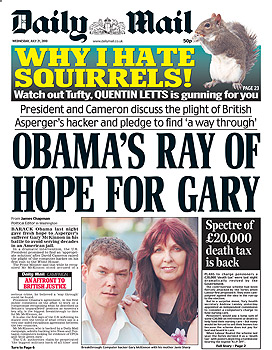 I write in measured response to the full-page opinion piece in Wednesday’s Daily Mail by pet columnist and sketch writer Quentin Letts, which was so important it was advertised in a colourful banner running across the front of the paper: WHY I HATE SQUIRRELS! it blared, next to a sweet cut-out of a grey squirrel. WATCH OUT, TUFTY, QUENTIN LETTS IS GUNNING FOR YOU Page 23. Well, it certainly caught my attention. The piece is here if you wish to read it for yourself, but I shall precis.

Quentin Letts is up in arms. He’s fucking furious. Either that, or he had a column to write to fulfil the word count he’s contracted to supply, and reasoned that he could whip up a souffle of paranoia and hate out of very little and just went for it. Either way, it all started when his seven-year-old daughter, Honor, spotted a grey squirrel in a nearby garden, bent down to stroke it and was bitten on her right thumb (“with a hiss and a swipe of claw and a baring of fang”). I suspect this happened a while ago, but it gave a nice personal “in” to the more topical news that a Staffordshire window cleaner, Raymond Elliot, 58, has been fined £1,547 for drowning a squirrel who persistently ate from his bird feeder.

This drowning (“a matter of a few seconds and far less cruel than poisoning or snaring” adds Letts) was spotted by a neighbour, who “squealed to the RSPCA”. He was prosecuted under the 2006 Animal Welfare Act. First – and we will hear from Letts a long list of the squirrel’s crimes – Mr Elliot seems to have drowned his nemesis for eating from bird feeders which he had put out in his garden. This rather paints a picture of an animal lover. Love birds, love animals. But unless this story is being distorted in reporting, he seems confused. Squirrels and birds cannot read. They do not care for the artificial distinctions we might self-flatteringly make about which food is for birds and which food is for mammals. They live in the wild. They see food, they eat it.

A squirrel would eat the seeds I put out for the birds if I didn’t have the feeders suspended in squirrel-proof cages, which allow smaller birds in, but keep larger mammals out. I hang out a peanut feeder without a cage which is open to all, including squirrels. The squirrels are almost always skilfully hanging from the bracket with their dainty feet, gnawing away at the nuts behind the wire mesh. Now, this is me artificially keeping the squirrels away from the bird food. I’m part of the illusion. But if a squirrel did manage to cleverly get inside the cage and eat the “birds’ food”, I would not drown him or her in a bucket. He will have done nothing wrong, for he is a wild animal. This is why, if I had a seven-year-old daughter, I would explain to her that squirrels are not pets, and may react badly if a hand is extended to stroke them. Quentin Letts is clearly a bad parent.

He blames those who take the animal’s side in any squirrel-versus-window-cleaner dispute for carrying around with them “Disneyfied notions of an anthropomorphised animal kingdom where every little furry thing has a name and a benign character.” Ironically, it is Letts who had allowed this sort of notion to be adopted by his daughter. And then he gets pissed off when nature rears up and bites him on the arse. (By the way, he later confesses to not taking his daughter in for a tetanus shot, which might have been wise, as the wound healed up cleanly in a week. He needs to make up his mind: are they diseased vermin or not?)

As efficiently and predictably as anyone who conveniently and subjectively divides the natural world up into “good animals” and “bad animals” loudly dismisses pigeons as “rats with wings”, Letts brands Squirrels “vicious tree rats.”I agree with him that squirrels are not “cutesy toys with the sort of feminised American accents and Tufty outfits you so often find on children’s television.” (Although I’m not sure why feminising is such an offence. Some squirrels are feminine.) I like squirrels because they are wild mammals, and living nearby. I feel privileged to be able to watch them from my window. Quentin Letts does not share my delight.

In fact, he uses the ire he has worked up about his daughter and the window cleaner to lay into the RSPCA, which, when it was founded 40 years ago, “was a much-needed voice of mercy on animal matters.” He illustrates his point by way of pit ponies and animals in tiny cages in zoos, which he graciously concedes were bad things.

“There was,” he recalls, nostalgically, “a brisk, slightly manly practicality to the RSPCA in those days.” That’s gone now, of course, along with all the other manly things that used to be around in the prelapsarian period that all Daily Mail writers hanker after, and old maids cycling home from Evensong and the thwack of leather on willow, and no benefits system or queue-jumping gypsies. “Today, sadly, it seems to be losing touch with common sense and is pursuing animal rights with a furious logic that seems to have more to do with vexatious litigiousness and a big-sister view of social engineering rather than balanced, public interest charity work.”

Yes, that’s right, the RSPCA are as bad as the recycling police, poking their noses in where they’re not wanted ie. Quentin’s garden. Like the RSPCA, “modern Britain” has “fallen prey” to “soppy-mindedness”. He cleverly puts speech marks around the word “rights” in “animal rights.” Even though he concedes that pit ponies had rights, not every other creature, it seems, does. Animal “rights”, he bemoans, have become “a vehicle for shrill, politically minded, urban activists – often with nose studs and purple hairdos and a problem with tolerance.” Nice one! If in doubt, cast activists as having purple hair. Because I’ve certainly never seen one without a purple hairdo. Still, at least Quentin Letts hasn’t got a problem with tolerance. He’ll tolerate anything that doesn’t inconvenience him.

Letts blames Beatrix Potter for making us think squirrels were nice. Although he does admit to getting the first stirrings of an erection to the bit in the tale of Squirrel Nutkin (PROPAGANDA!) where he “nearly lost his life to an owl.” And guess what, Letts likes the red squirrel more than the grey squirrel, whose crime is to be scruffier and being immune to a virus that affects the red. I won’t go down this road again, for fear of stirring up any more trouble with angry Word readers, but it underlines the fact that Quentin Letts has divided up the animal kingdom into those that he approves of, and those that he doesn’t. The latter group must face his wrath. (He gets quite hard when describing the way his neighbour’s spade came down on the thumb-biting grey squirrel. The man “brought it whooshing towards the ground with the swing of an expert golfer – ‘Fore!'” He didn’t do it, you understand. His neighbour did. But he watched. And squealed with glee at the way an animal going about its natural business was flattened. Let’s hope he brought his daughter to the slaughter, to teach her an important lesson about murder.)

Letts works himself up into a righteous fury at the way some softies think “life were one big episode of Watership Down.” As I recall, Watership Down was all about threat and peril, and was full of violence, but hey, why check something when you’re on a roll. Squirrels, he froths, are “a destructive menace. They wreck saplings and take birds’ eggs. The decline of the nightingale and song thrush can probably be attributed in part to squirrels.” Yes, and to over-farming and pesticide and herbicide use and pollution, which the squirrels can’t really be blamed for. Still, nice use of “probably” and “in part.” Any other caveats?

“These creatures are not innocent vegetarians, nibbling away at the grass. They are more likely to be found digging holes in your lawn while eyeing up the nearest tit’s nest.” Yes, you’re right. But remember when you forgot to tell your daughter that wild animals were not pets? If the neighbour’s cat had bitten her thumb, which it might have done had she lunged at it, would Quentin have invited the spade-wielding neighbour over the fence again? I suspect not. He likes pets, as they have been given names, because he is as guilty as the nose-stud brigade of Disneyfying animals.

“When our Patterdale terriers chase after squirrels, I certainly cheer them on every inch of the way.” Uh oh … the Hunting Act’s coming up. I can’t believe he hasn’t worked in recycling bins yet. Come on, there are a couple of paragraphs to go. To sum up: “This interference in petty domestic matters is often driven by single- issue fanatics, invariably employed by animal rights charities or living off state benefits.” Take that! Because if they like squirrels they’re probably lazy and feckless. “They resent the freedoms of the countryside and even of the private garden. They really do want to run our lives.”

Quick! Under the bed! Someone from the town is at the door! He has purple hair and a nose stud and likes animals. *starts gramophone record of Land Of Hope And Glory* “The time has surely come that we realise the damage being done to our society by the babyish caricature of wild animals as breathing cuddly toys. They are creatures, wild in tooth and claw, and must be treated as such.” So watch out, Tufty! A small man with glasses who was “probably” sent away to school by his beastly parents and was, “in part”, bullied, is out to get you, except he probably won’t actually do anything about getting you, just shake his little fist at you and call you a rat, and then run away and hide until his brisk, manly neighbour comes round with a bucket.

I don’t hate Quentin Letts, as hating just makes you a hater, but I do question his sincerity, and the coherence of this jumble of disparate arguments loosely themed around the countryside and animal activism and the nanny state. In a way I admire these thundering columnists and their ability to reassemble the same basic piece of invective in a different order, week in, week out. I wouldn’t have the energy. I am too busy watching birds and squirrels and foxes muddling along in our cities, which we built, and in the main, by and large, as a general rule, not biting babies on the face or badly drilled children on the thumb. I’m not an animal activist, but when a squirrel manages to type up a column that does as much damage to other squirrels as this kind of flimsy, button-pushing, scaremongering tripe, I’ll fetch the shovel and take it out of the food chain, as it just ain’t natural.

35 thoughts on “WHY I HATE QUENTIN LETTS!”