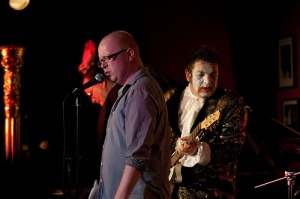 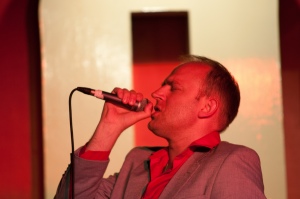 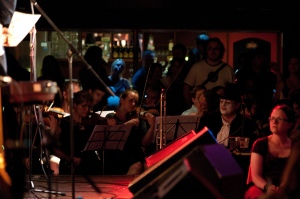 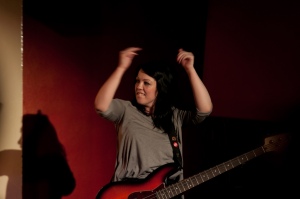 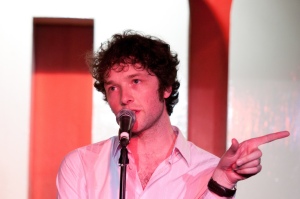 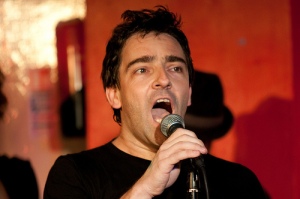 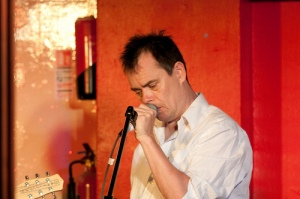 Another classic Karaoke Circus in London last night; second time with full orchestra at the legendary 100 Club, which doubled as an underground sauna. Thanks, as ever, to unofficial KC photographer Paul Bailey for capturing this hot and heavy evening. The full set of his photos are here. If you’ve never been, it’s hard to communicate what a seriously and uniquely entertaining and inclusive evening it is, but where else can you see comedians and entertainers of the calibre of Chris Addison, Tim Vine and Kevin Eldon singing with a live band – led by Martin White and Danielle Ward – and in this special case orchestral accompaniment, for the love of doing so?

Last night’s lineup also included Robin Ince, Lizzie Roper, Waen Shepherd, Tony Gardner and Petra Massey, each stepping outside of their comfort zone (Waen, for instance, usually hides behind the mask of a crazy character, but appeared last night as Waen for Jacques Brel/Scott Walker’s Jacky) and belting something out. Or in Tim’s case, crooning something out. For the record, I essayed Uptown Top Ranking, by Althea and Donna, and in full Jamaican patois, naturally. I am not a very good singer, but for as long as Martin invites me to take part, I will eagerly do so. It’s not about being a good singer – except when it is – it’s about having a go. Which is why the loudest cheers are often for members of the public: the so-called open spots. And why an open spot always wins the prize. That’s as it should be. At least the actors and comedians and other media folk who get up are used to being in the spotlight, sweating. Albeit probably not normally sweating as much as we all were last night.

It’s unfair to pick highlights, but for sheer synchronicity between musical arrangement, apt song choice and vocal/shape-throwing performance, it had to be Chris Addison’s Left To My Own Devices. As ever, props to the band: White, Ward, Foster and Reed, with Limb on piano; to the orchestra, whose fine players are too numerous to mention; and to the judges, The Baron and Dan Maier (wittiest line, relating to the heat after a heavily pregnant performer had done half of Dead Ringer For Love: “I was worried that her steam was going to break.”) – next chance to book tickets before the lineup is announced: August 17, Assembly, Edinburgh. I already have a song lined up, if they’ll have me.

Remember, the first rule of Karaoke Circus is to always go on about Karaoke Circus. It’s OK to do this, as most people won’t get it.